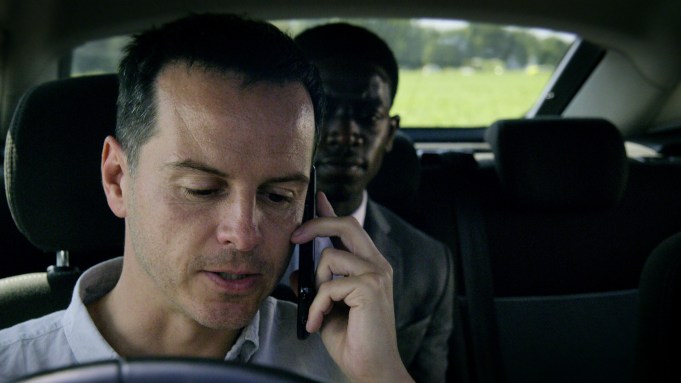 In more than 20 years of acting, Dublin-born Andrew Scott has amassed a resume whose depth and breadth are surely the envy of his peers.

Acclaimed TV roles range from the drolly comic, Golden Globe-nominated “Hot Priest” of BBC Three’s “Fleabag,” to the psychopathic Jim Moriarty in BBC’s “Sherlock.” Scott received a BIFA Supporting Actor award as a taciturn bibliophile in the feature film “Pride,” and an Olivier Award nomination for the most un-taciturn Prince of Denmark in a West End “Hamlet.”

He’s again enjoying small-screen kudos as the central figure in “Smithereens,” a season five episode of the Emmy-winning anthology “Black Mirror.” The thriller is the subject of a Netflix “Scene Stealers” video conversation with Variety editor Jenelle Riley.

As Scott tells it, he and showrunner Charlie Brooker had “danced around” various possible “Black Mirror” appearances, but “this is the one I thought, ‘Yeah!’” Poring over the script (“with a sniper outside,” he comments wryly, “to make sure I wasn’t going to tell anybody about it”), Scott was taken with the role of Chris, a deeply disturbed London rideshare driver who abducts a global tech giant’s employee for much more than a mere lift.

Stuck with his hostage for hours in a tight vehicle in an open field, while police negotiators wrangle and sharpshooters take aim, Chris is caught in a pressure cooker of his own making, one whose dimensions we only gradually discover. (That the captive is not the big shot he hoped for, but a terrified, innocent intern played by Damson Idris, only ups the stakes and suspense.)

“I was really gripped by this character,” Scott confirms, pointing to the unusual set of acting challenges posed by the flow of the narrative.

“I think any good part, the character has to start at point A and finish at point Z. And when you’re doing that in one location in a car, how do you do it so that you sort of reveal what’s going on with him bit by bit, but you never change location, you never change costume? You have to use the camera in a very smart way, which our director James Hawes really did.”

Much of the action was shot in continuity at Scott’s request, so that he might modulate the character’s journey without throwing too many punches too soon. “I wanted to be able to sort of slowly reveal who he was,” he explains. “I think you have a strong presumption as to who he might be at the beginning, and as the film goes along you understand his plight a little more.”

Co-star Idris, whom Scott calls “an incredible scene partner,” shared the arduous circumstances of several weeks. As Scott recalls, “It was very hot, weirdly, in London at the time when we shot it during the summer,” he says. “Incredibly intense and very, very, very emotional. It sort of plays with the idea of grief and how it might manifest itself … Yeah, that was dark.”

The explanation for Chris’ actions, once disclosed, directly relates to the phenomenon of people getting hooked on the “black mirror” of their cellphones. Though Scott’s own phone usage seems well under control, and he eschews a public social media presence (“because, you know, who needs it?”), his observations of life lived while attached to a handheld are acute.

“You can be incredibly influenced,” he notes, “sometimes even before we wake up, looking at our phones, by people that you’ve never met or people that you don’t aspire to be like. It’s just an unconscious habit. And that’s what this show is about.”

The meadow standoff of “Smithereens” culminates in an epic personal testimony — “this extraordinary, articulate rant,” Scott calls it; “this moment of catharsis” — which daunted even the man who’d just acted Hamlet 150 times for four hours at a clip.

The lengthy speech takes Chris to the furthest extremes of fury and grief. To Scott, it taps into phone users who seem to catch “this dopamine high … where we’re not even aware that it’s possible to be addicted to something.” A tech device can become “a crutch that disallows you from being present,” which is all the inspiration needed for an actor committed to being present in every role, at every moment.

“I really do believe in playfulness as an actor,” he asserts. While personalizing the material is essential, Scott says, “I’m not a Method person.” (No lengthy character biographies, or logging of hours behind a steering wheel to cart around unsuspecting Londoners, for Andrew Scott.) “Once you know the script really well, the most important thing for me is to be as playful as possible, and do it in as many different ways as possible.”

He clearly relished bringing Chris on this harrowing ride. (“It’s a very nice thing, sometimes, to be able to do those things in extremis that you don’t get to do most of the time in real life.”) Yet detaching from it was painless. “I was happy to, I must say. It’s a very, very sad story,” albeit laced with enough humor to render it “quite human,” Scott explains.

He recalls trotting off to “Fleabag” almost immediately afterward, easily and eagerly pivoting from this wrenching assignment to lighter fare. And then back again, as he has his entire career.

“Kids are very good at playing parts and then letting it all go,” Scott grins. “I take my cue from them.”