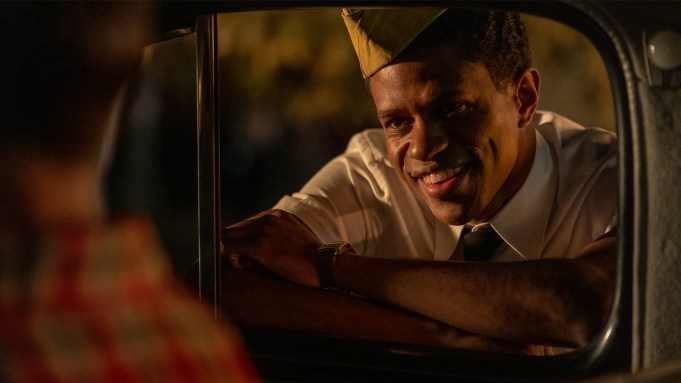 Netflix’s glittering miniseries, “Hollywood,” is all about the business of birthing stars. It only makes sense that Ryan Murphy’s seven-episode epic should birth a few of its own.

One of its most talked-about young performers, Jeremy Pope, sat down with the series’ award-winning casting directors, Courtney Bright and Nicole Daniels, to discuss the process of booking a choice role and generating industry heat. It’s the first installment of Netflix’s new FYSEE TV “Scene Stealers” series in which the host, Variety’s Jenelle Riley, places the streaming service’s award contenders in stimulating conversation with the casting gurus instrumental in helping them land their roles.

The hunt for tomorrow’s topliners, Daniels says, is “the only way to really keep our job interesting and fresh. We love finding new faces.”

Pope’s new face came to their attention via a weekly agency report on client activities, noting his acclaimed work in Broadway’s “Ain’t Too Proud.” Bright remembers thinking, “Who is this dreamboat? I actually emailed his agent, and said ‘I don’t know him, send me everything you have on him, I’m so curious.’”

As they say in Hollywood, cut to: several months later. Having already earned two awards apiece with Murphy, Bright and Daniels were excited to hear his new idea — an alternative history of how, after World War II, the film industry began to include Americans it had always sidelined, particularly women, gays and people of color.

Alongside real-life luminaries the storyline would focus on the personnel of fictional Ace Studios, where everyone is trying to get to the top or stay there. A central figure is African-American budding screenwriter Archie Coleman, who must make a living turning high-priced tricks at a local service station while hoping for a break. With him, we ride the highest highs and lowest lows of the Tinseltown roller coaster.

Remembers Bright, “Ryan talks to us about Archie, it’s so important that we cast Archie first, he really wants to get into it.”

She emailed the agent: “You’ve got to get Jeremy on tape right away.”

On the East Coast, Pope had just scored Tony nominations for two shows in the same year, an almost unprecedented feat, when the mail brought random pages for an “attractive aspiring screenwriter” in “Untitled Ryan Murphy Project.” He appealed to a castmate: “Hey, can you help me throw this tape together? I don’t really know what I’m doing, but I’m just going to make a choice and stick with it, and hopefully it sticks.”

Normally when a project’s breakdown goes out, tapes are submitted and auditions reviewed so that weeks will elapse before Murphy is presented with the favorites. This time Bright said to herself, “I can’t wait to watch hundreds of other auditions. This is our guy.”

Adds Daniels: “It doesn’t happen often where we send to Ryan, and within two seconds he writes back, ‘That’s the one.’” The producer-director flew to New York for Tony Awards weekend. Pope didn’t get a Tony, but as a consolation he won the starring role for his first foray into television.

In Murphy and Ian Brennan’s what-if-things-happened-this-way saga, Archie embarks on a forbidden love affair with another Hollywood newbie with a dream — naive farm boy Roy Fitzgerald, who before long will be renamed Rock Hudson.

Depicting this relationship with the requisite emotional and physical honesty was particularly challenging for Pope and Jake Picking, another of the series’ stars in the making. Scheduled for their first day, in fact, were their steamy sex scenes. For two actors strangers to each other but for a get-together meal, it was a true baptism by fire, despite director Murphy’s support and the presence of an “intimacy coach.”

Recalls Pope: “We asked everyone to leave, and we were in the holding room together. And we just talked: ‘How are you? How’s your heart? Where are you at with all of this? I know this is a lot, you’re worried about the performance.’”

Pope confessed his own apprehensions, while Jake “talked to me about how anxious he was about playing Rock Hudson, this icon. And I just shared with him about just having finished [playing a real person] on Broadway. ‘Your job is to just bring the essence and your truth to this person. You don’t have to feel you have to be a caricature of him.’ We were able to bond on that. … We had to trust each other.”

Critics and audiences are applauding the authenticity of Archie and Roy as a couple, and Pope suggests its source. He applauds his co-star as “so open, and his heart was there. And he was being so vulnerable with me that I think we really leaned on each other and were there for each other.

“And that’s the relationship of these characters. These people need each other — they become like home. They know it’s going to support them through the ups and the downs. … I feel like on camera we had that, and off camera I really felt like Jake had my back through it all. So we did our sex scenes together, and the rest was easy-peasy.”

Pope and Picking are now prominent and acclaimed in a hit series. It’s a giant career leap for both, and it happened not just because of their talent, but also because a producer and two casting directors were willing to take a gamble.

“It is a leap of faith,” Daniels agrees. “Sometimes you just get really, really lucky.”