Harvey Weinstein Guilty of Sexual Assault and Third-Degree Rape, Acquitted on Other Charges 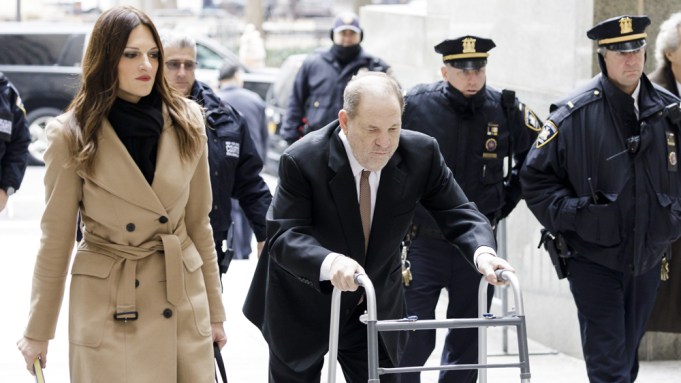 Harvey Weinstein was found guilty on Monday of committing a “criminal sexual act” and third-degree rape, but acquitted of two counts of predatory sexual assault.

The jury of seven men and five women deliberated for four and a half days before reaching the verdict on Monday morning. Weinstein was stone-faced as the verdict was read.

Justice James Burke ordered Weinstein to be taken into custody. He is due to be sentenced on March 11.

At a press conference, District Attorney Cyrus Vance, Jr., hailed the verdict as marking a “new day” for rape victims.

“Rape is rape, whether it’s committed by a stranger in a dark alley or by an intimate partner,” Vance said. “It’s rape whether it’s committed by an indigent person or a man of immense power, personage and privilege… Weinstein is a vicious serial sexual predator who used his power to threaten, rape, assault, trick, humiliate and silence his victims.”

Outside the courthouse, defense attorney Donna Rotunno said he will appeal. “The fight is not over,” she said. “He is going to continue to fight.”

Weinstein faces a maximum of 25 years in prison on the charge of sexually assaulting Miriam Haley at his Soho apartment on July 10, 2006. He was also convicted of third-degree rape on the charge of assaulting Jessica Mann, an aspiring actress and hairdresser who accused him of raping her at a DoubleTree Hotel in New York on March 18, 2013.

The verdict indicates that the jurors did not believe, beyond a reasonable doubt, that Weinstein had raped and assaulted actress Annabella Sciorra at her Gramercy Park apartment in the early 1990s.

After the verdict was read, Rotunno asked that he remain out on bail pending his sentencing. She said that he required medical attention, following an unsuccessful surgery on his back. “He is currently taking shots in his eyes so he does not go blind,” she said. Burke denied the request.

Soon after the verdict was read, Weinstein was surrounded by bailiffs, handcuffed, and taken to jail.

On Friday, the jurors appeared to be deadlocked on the two most serious charges of predatory sexual assault. They sent a note to Burke asking what to do if they could not agree on those counts, but were unanimous on the charges of rape and criminal sexual act. Burke instructed them to keep deliberating.

The prosecution called 28 witnesses over 12 days, including three “prior bad acts” witnesses, who told jurors that Weinstein had sexually assaulted them in his apartment and in hotel suites in New York and Beverly Hills.

The jurors had focused in on Haley and Sciorra’s testimony, asking the court reporter to read back substantial portions of their accounts.

Haley told the jurors that Weinstein lunged at her on the sofa, and then backed her into a bedroom. “He pushed me down,” she said. “He held me down by my arms. I said, ‘No, no!'”

Prosecutor Joan Illuzzi had urged jurors to convict the producer, saying he had abused his immense power in the industry to exploit vulnerable women. She argued that Weinstein could have hired sex workers, but preferred to trick aspiring actresses into his “lair.”

Several of the accusers told harrowing stories of the effect of the assault on their lives. Sciorra testified that she began cutting herself, and fell into depression and addiction in the years following the rape. She and others cried on the stand. Mann sobbed several times, and at one point the trial had to be halted for the day when she could not continue.

“They sacrificed their dignity, their privacy and their peace,” Illuzzi told the jury in her closing argument. “All for the prospect that their voices would be enough for justice.”

The defense had sought to highlight affectionate emails between the producer and his alleged victims, arguing that rape victims would not communicate that way with their assailant. Rotunno argued that Mann had consensual sex with Weinstein because she wanted to attend parties and advance her career.

She also contended that the witnesses had turned against Weinstein because they were pursuing fame and civil payouts. Rotunno said that Sciorra had become the “darling of the movement” after claiming that Weinstein raped her.

Earlier on Monday morning, defense attorney Arthur Aidala made a motion for a mistrial. The motion was denied.

Weinstein still faces four additional charges in Los Angeles, where is accused of raping one woman and assaulting another within a 48-hour period in 2013.