Feminist Protesters Chant Outside Harvey Weinstein Trial: ‘The Rapist Is You’ 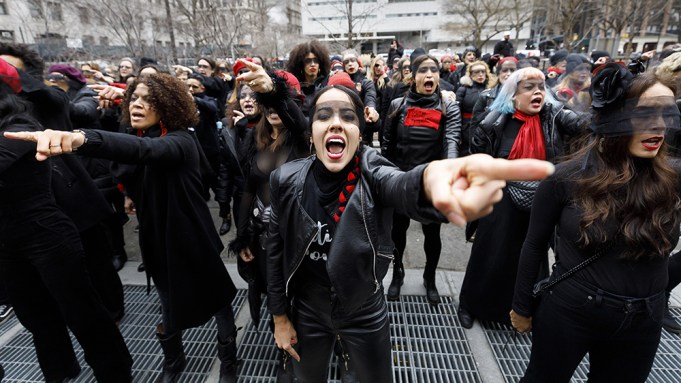 An organized group of women performed a feminist anthem and dance in protest outside of Harvey Weinstein’s trial in New York late Friday morning, while the disgraced movie mogul was inside the courthouse for jury selection for his rape trial, which began earlier this week.

Protesters outside the courthouse chanted in Spanish and English, “It’s the judges, the state, the president, the oppressive state is the rapist. It’s not my fault or how I dressed. The rapist is you.”

While the group of women were protesting, over 100 potential jurors were inside the courthouse being questioned by Justice James Burke, alongside Weinstein, his defense team and prosecutors from the D.A.’s office.

Journalist Jodi Kantor — who broke the first Weinstein story for The New York Times, which set off the #MeToo movement — tweeted footage of the organized chant from outside the courthouse, writing, “Dramatic protest happening outside the Weinstein trial.”

Kantor’s tweet caught the eye of Weinstein’s defense team, who brought the tweets to the judge’s attention after they had heard noise from outside the courtroom, arguing that their client cannot get a fair trial because of the public interest and circus-like media attention surrounding the case.

Following the dismissal of the potential jurors, Weinstein attorney Damon Cheronis brought up his concerns about the protest to Burke, explaining that he had heard a chant coming from outside during the jury selection process, and he “did notice the faces of some jurors, noting that they had heard that chant.” While he could not make out what the chant was about during jury selection, Cheronis said Kantor’s tweet and various media reports indicated that there was a protest outside of the Weinstein trial.

“Your honor, again, we’ve filed several motions in this case,” Cheronis said. “The problem with this specific instance is that we’re trying to pick a jury that is fair and impartial that is not swayed by the media and we have a flashmob outside that is chanting, ‘The rapist is you.'”

“If there’s a mob outside chanting for justice, which they say is the conviction of Harvey Weinstein,” Cheronis said, “it is this type of atmosphere that makes it near impossible for Mr. Weinstein to get a fair trial.”

Cheronis asked the judge to bring the same potential jurors back into court so that they could be re-questioned without distraction. The judge denied his request, noting the commonplace nature of protests outside of the New York City criminal courthouse.

“I disagree with you,” Burke responded, explaining that he, too, heard the chanting, but could not make out what the words were from inside the courthouse, so he assumed the potential jurors and attorneys could not hear the words about Weinstein either. “It wasn’t until you attorneys went in the back and looked at your cellphone that you were able to determine” what the protest was about, the judge reasoned.

The judge agreed with Weinstein’s attorney on the fact that there will likely be many protests outside of the courthouse throughout the rape trial, and many times, it will be easily audible that the protesters are changing about Weinstein. “That doesn’t really matter because there will be days where it is crystal clear,” Burke said. “In fact, it probably makes any Manhattan juror that more conscious of their duty to determine testimony and evidence based on only what occurs in this courtroom and not outside — which I’ve reiterated to them repeatedly. I don’t really have much more to say about that, other than the formality of denying the request.”

On his way out of the courtroom, Weinstein was asked by the press what he thought about the women chanting outside. Although he did not verbally respond, while he was exiting with his walker, he looked at the line of reporters and shrugged.

The song and dance that was chanted on Friday is called “Un Violador en Tu Camino,” which translates to “A Rapist in Your Path.” It first went viral in late November 2019, thanks to feminist theater group Las Tesis. Inspired by the work of Argentinian theorist Rita Segato, who defines rape as an issue of politics rather than individual morality, the group says the chant was created “to show rape not just as a crime against an individual woman, but the expression of a larger social issue.”

Weinstein’s trial began this week in New York as Weinstein was hit with new charges in Los Angeles. The disgraced movie mogul is facing five charges in New York due to accusations that he raped a woman in a hotel room in 2013, and forcibly performed oral sex on another woman in his apartment in 2006. He also now faces four charges in Los Angeles of forcible rape, forcible oral copulation, sexual penetration by use of force and sexual battery by restraint stemming from the alleged rape of one woman and sexual assault of another over a two-day period in 2013. Weinstein alleges all sexual acts were consensual. If convicted, the Oscar-winning producer faces life in prison.

(The above video was shot by Molly Crane-Newman.)