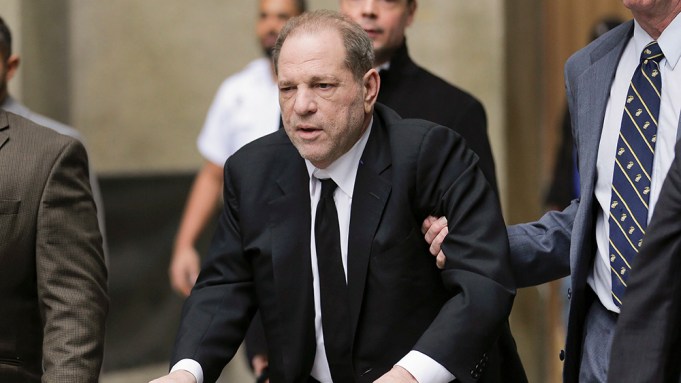 Harvey Weinstein has been charged in Los Angeles with raping one woman and sexually assaulting another in 2013.

The charges were announced Monday as Weinstein’s trial got underway in New York on five other charges.

In the new case, Weinstein is accused of assaulting the two women within a two-day period. He is alleged to have raped one woman after forcing his way into her hotel room on Feb. 18, 2013. The next evening, he allegedly sexually assaulted a second woman at a hotel suite in Beverly Hills.

Los Angeles County District Attorney Jackie Lacey said that each of the women told someone else about the alleged assaults in 2013, and first brought their cases to law enforcement in 2017. One case was investigated by the LAPD, the other by the Beverly Hills Police Department.

“We believe the evidence will show that the defendant used his power and influence to gain access to his victims and then commit violent crimes against them,” Lacey said at a press conference. “I want to commend all the victims who have come forward and bravely recounted what happened to them. It is my hope that all victims of sexual violence find strength and healing as they move forward.”

Weinstein has denied all charges of non-consensual sex.

The Los Angeles D.A.’s office detailed the new allegations in a motion to set Weinstein’s bail at $5 million. In the first alleged assault, Weinstein is said to have met the accuser at a film festival on Feb. 17, 2013. Later that night, he came to her hotel room. They talked briefly before Weinstein attacked her, forced her to perform oral sex, digitally penetrated her and raped her, according to the motion. The woman — identified as Jane Doe 1 — said she delayed reporting the incident because Weinstein threatened her life.

In the second incident, the accuser said she met with Weinstein and a female acquaintance at a West L.A. hotel on Feb. 19, 2013. They spoke in a common area before Weinstein invited both women up to her suite. The accuser — Jane Doe 2 — said she unwittingly followed Weinstein into the bathroom, and then the female acquaintance shut the door behind her. She was unable to get away, as Weinstein took off his clothes and took a quick shower, according to the motion. Weinstein then allegedly positioned himself between the woman and the door. He allegedly turned her around, and held the woman by her breast while he masturbated onto the floor.

Three of the criminal counts involve the allegations of Jane Doe 1, while the fourth charge — sexual battery by restraint — pertains to Jane Doe 2.

“My client, Jane Doe 1, has fully cooperated with the LAPD and the DA’s office for the past two years,” Ring said. “She is thankful for their collective work that has resulted in these criminal charges against Weinstein. She values her privacy, but will do what is necessary to obtain justice for what Weinstein did to her in 2013.”

Lacey said that prosecutors likely would seek to call other women to testify in support of the two women’s accusations.

The Los Angeles D.A.’s office has been reviewing eight cases involving Weinstein, some of which were submitted as long as two years ago. At the press conference, Lacey announced that she had declined to file three of those cases because they fall outside the statute of limitations.

The three declined cases were detailed in prosecutors’ charge evaluation worksheets. One of them involved a woman who alleged that Weinstein lured her to a Beverly Hills hotel room in November 2011. The woman claimed that Weinstein was wearing a bathrobe and exposed himself to her. He tried to hold her by the hand and coax her into the room, but she was able to get away.

The second case involved a dancer at a strip club who accused Weinstein of misdemeanor sexual battery. That incident dated from December 2015, and was also declined due to the statute of limitations. The third case involved a woman who accused Weinstein of raping her during a house party in Hollywood in the late 1970s, and was also declined due to the age of the allegations.

Three other cases remain under investigation.

Lacey said the timing of the charges — on the opening day of Weinstein’s New York trial — was a coincidence.

“The bottom line is we have been working on this case quite diligently in the last couple of years,” she said. “It turns out coincidentally that our case was ready to go this year. This was the first business day we could get everyone together that we needed in order to do this.”

Jane Doe 2 in the Los Angeles case is expected to be a supporting witness in the New York trial.

Weinstein is expected to appear to face the new charges once the New York trial concludes. He is currently free on a $2 million bond in connection with the New York case.

L.A. prosecutors cited Weinstein’s financial resources and history of alleged sexual assault in asking for $5 million bail in the new case. The office cited media reports indicating that Weinstein had recently sold $55 million worth of real estate, and also cited allegations that he had repeatedly violated bail terms in New York.

“The defendant is a serial sexual assault offender who has shown through his repeated crimes of a sexual nature that he is a severe danger to the public,” the motion states. “Because of the defendant’s financial resources, it is foreseeable that he would use his wealth to relocate to a jurisdiction with an extradition treaty unfavorable to a just outcome in this prosecution.”

Speaking at the press conference, LAPD Chief Michel Moore said the case remains under investigation, and called on additional accusers to come forward.

“For far too long women and other victims have been preyed upon by primarily men, who feel from their position of power that they can take advantage of women and these women will remain silent,” Moore said. To the victims, he said law enforcement “will aggressively pursue any lead to bring to justice those individuals who would prey upon you.”

Beverly Hills Police Chief Sandra Spagnoli also thanked the women who have come forward, and asked additional victims to report their allegations to police. “We have committed to leaving no stone unturned, and if there’s anyone who believes that they’ve been victimized, let us support you and know that you are not alone,” she said.

Lacey created the Hollywood sex crimes task force in November 2017, after numerous women began to come forward to law enforcement in the wake of the #MeToo movement. The office has received cases from the LAPD, the L.A. County Sheriff’s Department, and the Beverly Hills Police Department.

This is the first task force case has resulted in a prosecution.

Weinstein is also under investigation in London and Dublin, Ireland.

In a statement, a group of 25 prominent Weinstein accusers — including Mira Sorvino, Rosanna Arquette and Rose McGowan — called the latest developments “a clear indication that the risks we took and the consequences we subsequently faced were not in vain.”

“Today represents a new day for our society,” they said. “Now is the time to see Harvey Weinstein, and abusers like him, finally be brought to justice.“