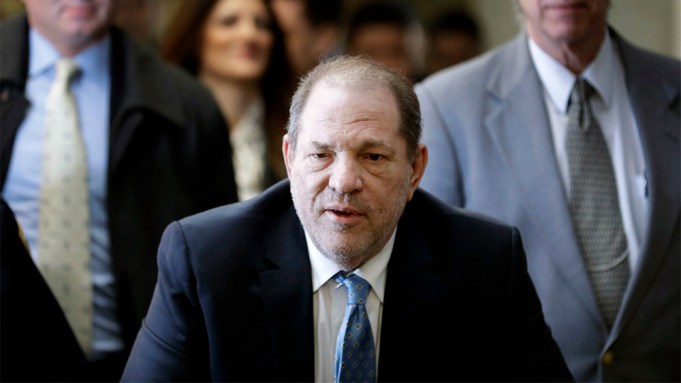 After Harvey Weinstein was sentenced to 23 years in prison Wednesday on charges of sexual assault and third degree rape, entertainment industry heavyweights were vocal in reacting to the powerful outcome that marked the downfall of a man who was once one of the most influential and powerful figures in Hollywood.

Before his sentencing, Weinstein addressed the Manhattan courtroom where he expressed his “deep remorse,” but also that he was “totally confused” in regards to the #MeToo movement and its impact on the country.

“I think men are confused about all of this, “Weinstein said. “This feeling of thousands of men and women who are losing due process, I’m worried about this country.”

Time’s Up, an advocacy group formed as the #MeToo movement roiled Hollywood, issued a statement after the news. “First and foremost, we are grateful for the courage and strength of Mimi Haleyi, Jessica Mann, Annabella Sciorra, Dawn Dunning, Tarale Wulff, and Lauren Young, who bravely testified in court, and we remain in solidarity with the more than 100 survivors who suffered abuse, harassment, and rape at the hands of Harvey Weinstein,” the statement reads. “The trauma of sexual assault and harassment is lifelong — we can only hope that today’s sentence brings all of the survivors of Harvey Weinstein some measure of peace.”

The organization added, “We also hope that these women take pride in knowing the impact they have had on our culture at large. Whether by inspiring more survivors to come forward and seek help, changing how the justice system responds to sexual violence, or leading corporate boards to hold more CEOs accountable for toxic workplace culture, the social change catalyzed by these survivors has been nothing short of transformational.

Actress Mira Sorvino, one of Weinstein’s most vocal accusers, took to Twitter to express her gratitude for the justice system.

“23 years,” she wrote. “Harvey Weinstein has been sentenced to 23 years in prison for his crimes of rape and sexual assault. I literally cried tears of amazement, gratitude that the justice system has worked on behalf of all of his victims today.” Rosanna Arquette, who also accused Weinstein of sexual assault, said she is thankful for those who testified, as well as the reporters who helped break the initial story of Weinstein’s history of abuse.

23 years. Harvey Weinstein has been sentenced to 23 years in prison for his crimes of rape and sexual assault. I literally cried tears of amazement, gratitude that the justice system has worked on behalf of all of his victims today.

Gratitude to all the silence breakers especially Rose and all survivors of weinstein to the brave women who testified and to the incredible investigative reporting of Ronan farrow who uncovered the sabotage and spying and to david Remnick thank you Rich McKuen and ny times.

Patricia Arquette praised the whistleblowers involved in the Weinstein case and all the victims of sexual harassment, adding that they “put their careers and reputations at risk to help clear the way to know the horrible acts Harvey has done.”

Thank you @RoArquette @rosemcgowan @MiraSorvino and all the Whistleblowers in the Weinstein case who put their careers and reputations at risk to help clear the way to know the horrible acts Harvey has done. Thank you to all the brave victims. @RonanFarrow

23 years in prison for Harvey Weinstein. justice is served.

Actress Amber Tamblyn predicted that this moment is “only the beginning,” in regards to the #MeToo and Time’s Up movement.

JUSTICE for #SilenceBreakers and survivors of sexual abuse everywhere. This is only the beginning. #TimesUp https://t.co/8cUwdimxJd

See more of Hollywood’s reaction below:

My heart goes out to all the woman who came forward. A couple of these women I've known and appreciate as actresses but to see their strength through all this is just so inspiring.

to the brave women who are survivors of harvey weinstein’s repugnant crimes — both those who were vocal publicly & those who suffered in silence. YOU -along with the journalists who covered the story, #metoo + #timesup have changed the course of future histories. THANK YOU. ♥️+🙏🏻 https://t.co/WnFa1jSG1D

Rough day for Harvey Weinstein, but I think there are still some more Oscars and Tonys in his future. And Marvins. And Mikes and Toms and Elroys and Freds…

Please don't let Harvey Weinstein pull an "Epstein" and take the easy way out. Keep an eye him. He's not used to small quarters.

23yrs!!! Convicted and Sentenced! Today the world shifted that much more for justice! May my dear friend Annabella Sciorra and all these brave women continue to heal and finally find some peace with this victory! #HarveyWeinsteinGuilty https://t.co/QI76zTmdIj