Harvey Weinstein Stunned by Verdict: ‘I’m Innocent. How Could This Happen in America?’ 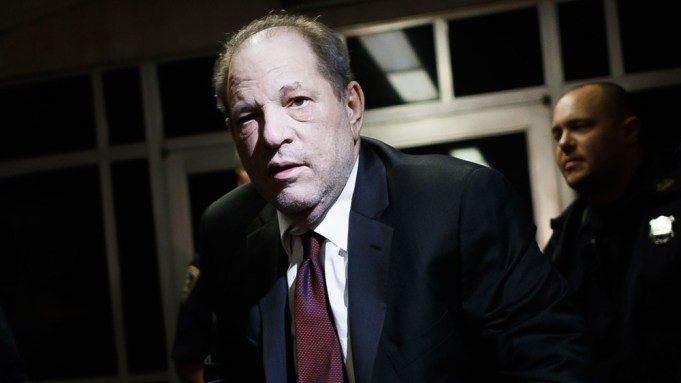 As Harvey Weinstein sat in court when his verdict was being called, it was difficult to see the reaction on his face as the former powerhouse producer was surrounded by a swarm of court officers — but Weinstein’s attorney says the fallen mogul was stunned by the guilty verdict.

Aidala was sitting next to Weinstein at the defense table as the verdict was read. The attorney says Weinstein did not take any convincing or maneuvering to get up, and was compliant when he was taken by the court officers into custody.

Weinstein was found guilty by the jury of committing a criminal sexual act and third-degree rape, but acquitted of two counts of predatory sexual assault. Justice James Burke remanded Weinstein, ordering him to be taken into custody. He is due to be sentenced on March 11.

Aidala tells Variety that Weinstein’s legal team is not surprised “at all” that their client was remanded. They were expecting that, even though Weinstein’s lead attorney, Donna Rotunno, asked the judge to let Weinstein remain free on bond pending the sentencing.

Rotunno said Weinstein takes a lot of medication and underwent “unsuccessful” back surgery, which is why he needs a walker. For the first time, she also indicated that Weinstein’s vision is impaired. “He is currently taking shots in his eyes so he does not go blind,” Rotunno said. “Judge, he was found not guilty of the most serious charges,” she added.

The judge recommended transporting him to the medical infirmary, and Aidala hopes he’ll be taken to Rikers Island, which has medical facilities. “The people at my office right now are working on that,” Aidala told reporters. “They’re getting ready to get him there,” based on the judge’s recommendation. He expected him to be moved to Rikers on Monday.

Aidala says Weinstein thanked his legal team right before the verdict was read, expressing his gratitude for their hard work, “No matter what happens.”

Monday morning, Aidala says Weinstein was in relatively good spirits, “functioning” and reading, before learning of his fate. “He handled it very, very well,” he said, adding that he spent the past weekend with his two young children.

Weinstein said his favorite film is “The Godfather.”