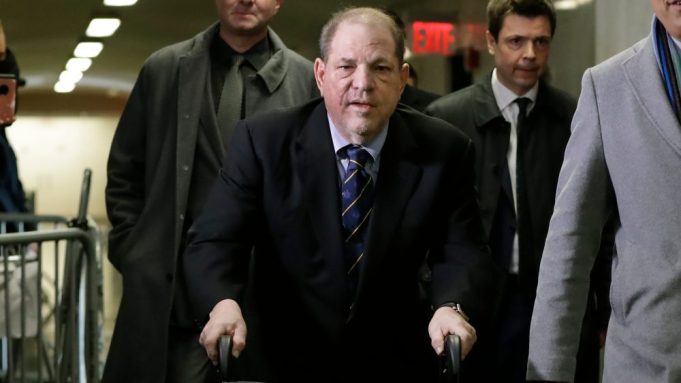 Forensic psychiatrist Dr. Barbara Ziv told jurors Friday at Harvey Weinstein’s rape trial that it is “very rare” for victims to immediately tell others about a sexual assault and it is even more unusual for victims to promptly report the incident to law enforcement.

Ziv, who testified as an expert witness in Bill Cosby’s 2018 sexual assault trial, took the stand in New York Supreme Court in Manhattan on Friday for the prosecution to explain the concept of “rape myths” to the jury, noting that research proves that most people have pre-conceived notions and commonly held beliefs about sexual assault that are wrong.

“It is very rare that when woman have been sexually assaulted by someone they know that they go to the police,” Ziv said. “They don’t want to branded as a victim of sexual assault. They don’t want anyone to know so there are a lot of women who never report to anybody.”

Ziv testified that she has never met, assessed or treated any of the women involved with Weinstein’s trial. She detailed in her testimony the common behaviors of rape and sexual assault victims, explaining why women keep in contact with their rapists and why victims of sexual assault rarely report the attack to the police.

While most people believe that sexual assault happens between strangers, Ziv said at least 85% of rapes are committed by someone the victim knows. She also explained that victims of sexual assault typically do not resist their assailants, with only 20% to 40% of women “being raped in a back alley by a stranger” resisting the attacker.

Another common rape myth is that victims of sexual assault do not have subsequent contact with the perpetrator. Ziv knocked down this myth, explaining that victims typically do continue contact with their perpetrator, including texting, calling and even having a relationship with their rapist. She also explained that a second sexual assault is normal, and the shame involved with an additional attack is worse for the victim than the first time.

During opening statements earlier this week, Weinstein’s lawyers showed the jury evidence of communication between Weinstein and his accusers, indicating that the defense’s strategy will be to discredit the women through their email and text exchanges that appear to show loving communication with Weinstein. One email included a star witness, Jessica Mann, asking Weinstein to meet her mom. In another message, Mann referred to Weinstein as her “casual boyfriend.”

Ziv addressed these reactions in her testimony.

“The reasons are complex,” Ziv said. “Why women continue to have contact with the perpetrator include the fact that as devastating as sexual assault is, most individuals think, ‘I can put it behind me and move on with my life and put it in a box. … I don’t want it to get worse. I don’t want this individual who sexually assaulted me to ruin my reputation, to tell people, to ruin my job opportunities. … I can handle this physical trauma, but god forbid they ruin the rest of my life.'”

Threats are often associated with sexual assaults, the psychiatrist explained, including rapists telling their victims that if they tell anyone about what happened, they’ll ruin their reputation and that no one will believe them.

“There is always a worry of the victim that the perpetrator can ruin their life,” Ziv said, adding that this concern can scare victims “even more profoundly than being sexually assaulted.”

When women know the perpetrator, which is typically the case, the victims “frequently do not leave and they stay for a long period of time” partly because they’re hoping to resume their former relationship with the rapist, in denial that the attack happened. “They can’t really believe that this has happened to them … they’re hoping that this is just an aberration,” Ziv said. “The victim will [tell themselves], ‘Yes, they did this horrible thing, but look at all of these other really good things that they’ve done.'”

Common behavior in the aftermath of sexual assault, Ziv shared, could range from women becoming promiscuous, beginning to drink too much or engage is self-destructive behavior, including cutting themselves.

On Thursday, actress Annabella Sciorra testified, stating that Weinstein raped her. During her testimony, she said after Weinstein allegedly raped her, she began drinking and cut herself for a few years.

Sexual assault victims often have altered memories of their attack, Ziv explained, noting that memories of traumatic experiences are much different than the memory of regular experiences. “They won’t remember everything, but they’ll remember something that happened to them,” she said. “The passage of time can impact the emotional response to sexual assault.”

When questioned about her qualifications, Ziv said she has assessed over 1,000 convicted sex offenders and has treated and assessed “well over a thousand” victims of sexual assault and rape. She also said she has been called to serve as an expert witness in more than 200 cases in multiple states.

In New York, Weinstein is facing five counts of predatory sexual assault, rape and criminal sexual acts. If convicted, he faces a potential life sentence. He also faces four charges in Los Angeles for allegedly raping one woman and sexually assaulting another in 2013, which carry a sentence of up to 28 years in prison. Weinstein’s criminal trial began on Jan. 6 at the state Supreme Court in Manhattan.