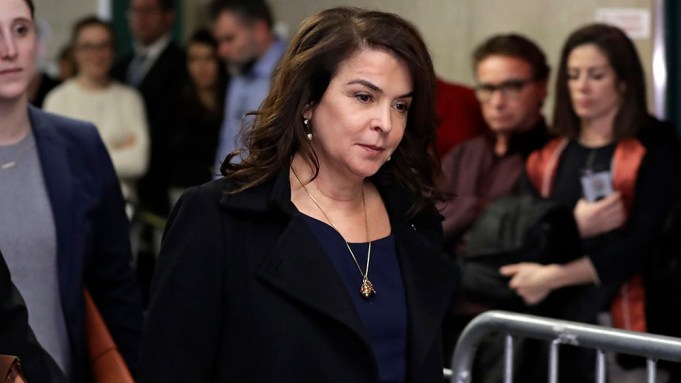 A longtime friend of Annabella Sciorra testified Friday in Harvey Weinstein’s criminal trial that the actor turned to cutting herself and exhibited other troubling behavior in the mid-1990s after she was allegedly raped by the disgraced film mogul.

The defense questioning of model Kara Young got heated as Judge James Burke sustained repeated objections to Weinstein attorney Arthur Aidala’s questions about Sciorra’s financial situation and history of substance abuse. At one point, the judge raised his voice to tell Aidala to sit down and end his questioning.

On Thursday, Sciorra told the jury in New York state Supreme Court in Manhattan the harrowing story of how Weinstein allegedly raped her in the early 1990s and the debilitating toll it took on her life and career. On Friday, Young testified of her concern at seeing signs of slashes on Sciorra’s legs on March 21, 1994, when Sciorra, Young, Sciorra’s then-boyfriend Gary Oldman and others were at the home of artist Julian Schnabel to watch the live Academy Awards telecast.

Young said she noticed a difference that night in Sciorra, a friend she had been close with since the late 1980s.

“She was different,” Young said. “She was fidgety and nervous and she seemed like a mess.” Young said she saw “long skinny cuts” around Sciorra’s upper-leg area and she confronted her friend about it. Sciorra at the time acknowledged to Young that she was deliberately cutting herself.

Aidala pressed Young on whether she knew of Sciorra’s financial troubles or problems with substance abuse at the time. Burke upheld a slew of objections from prosecutors to questions about Sciorra’s finances and her history of alcohol and drug abuse. The judge also blocked questions about whether Young reached out to medical professionals or took other steps to help her friend after the revelation.