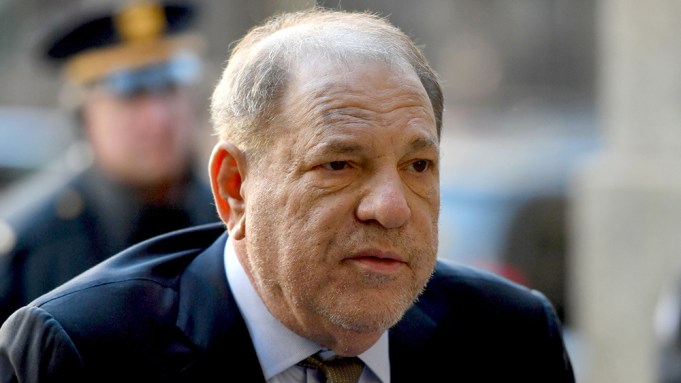 Jessica Mann, a key witness in the Harvey Weinstein trial, finished her testimony Tuesday after facing cross-examination about her mental health.

Near the end of the testimony, defense attorney Donna Rotunno played an audio recording of Mann speaking with a psychic. In the recording, Mann — who works as a hairstylist — discusses Weinstein, referring to him as a “client.”

“He tries to cross boundaries in my life, but I don’t allow him to,” she said on the recording.

Mann has alleged that Weinstein raped her at least twice, and engaged in other abusive and degrading acts. Rotunno asked if Mann was lying to the psychic when she said he had not crossed boundaries.

“I guess I was lying then,” Mann said.

Mann said she visited the psychic in the summer of 2018, around the time that Weinstein was charged with rape and sexual assault.

“There are a lot of people who are scummy leaches in Hollywood,” she told the psychic on the recording. “There are people who are only in my life for a purpose to serve me in a good way, even though they do really bad things and are probably crazy… Do you know the Hollywood scene? Like Harvey Weinstein is a good example. He’s my client. He’s been a part of my life, and I can’t tell that to people that… He tries to cross boundaries in my life, but I don’t allow him to…. I think he’s a f—ing big ass pile of s—.”

The psychic responded that that it was “karma,” and that she’s put him in his place and that he’s scared of her.

“I have a world of people in this industry around me who say you’re dumb and you’re naive,” Mann told the psychic.

Rotunno also asked Mann about her psychiatric history. Mann acknowledged that she had been diagnosed with mixed anxiety and depressed mood disorder. She also acknowledged engaging in self-harm and contemplating suicide.

“I’ve just been depressed,” she said.

Rotunno asked: “Have you had anger issues?”

“Yes, I’m angry,” Mann shot back. “Are you my psychiatrist?”

Earlier, Rotunno showed Mann a series of emails in which she discussed meeting with Weinstein and spoke affectionately about him. She suggested that Mann was not taking responsibility for her own agency in the relationship.

“It doesn’t change the fact that he raped me,” Mann answered. “It’s not about making an excuse. This is something I want to explain… I don’t need an excuse. I own my behavior.”