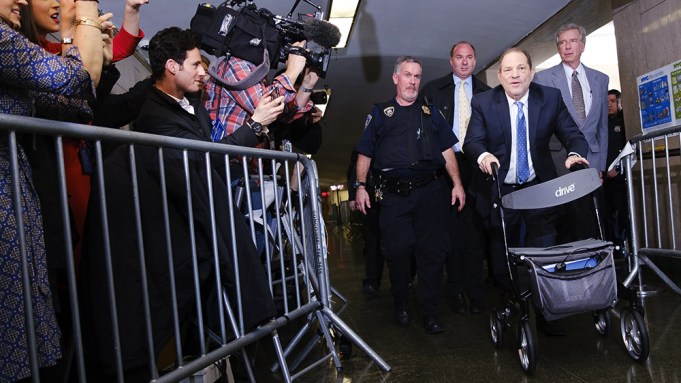 Harvey Weinstein was taken to Bellevue Hospital in Manhattan on Monday after complaining of chest pains, according to his representative.

Weinstein was supposed to be transferred to the jail on Rikers Island, but was diverted to Bellevue. Weinstein was remanded into custody on Monday morning after a jury convicted him on charges of sexual assault and third-degree rape.

Bellevue is known for its psychiatric facility, but it also serves as a hospital for jail inmates.

Weinstein had been free on $2 million bond, but Justice James Burke ordered him held in jail prior to sentencing on March 11.

His attorney, Donna Rotunno, urged the judge to allow him to remain free, saying that he recently had unsuccessful back surgery and requires shots in order to keep from going blind. Weinstein appeared in court most days with a walker, which his attorneys said was a result of his lingering back issues.

During a TV interview on Fox News with Martha MacCallum on Monday evening, Rotunno was asked by the anchor if Weinstein would be getting medical care at whichever prison facility he ends up in, since he was remanded. Rotunno said her client will be receiving medical care, and she mentioned that he was having heart palpitations on Monday, though she did not reveal that he was admitted to the hospital with chest pains.