Are Harvey Weinstein’s Accusers Planning to Sue? Gloria Allred Says ‘This Is All Speculation’ 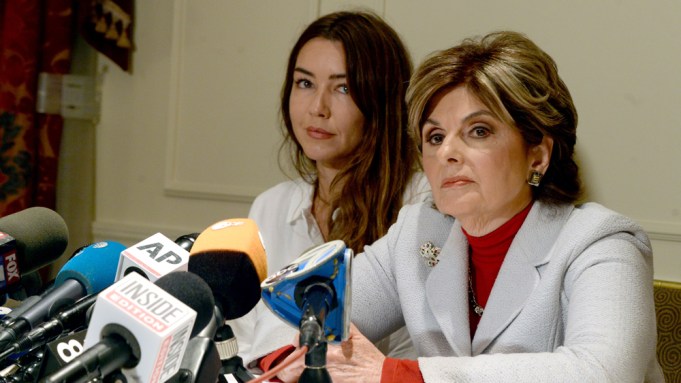 Gloria Allred is representing three of the six women who have testified in Harvey Weinstein’s criminal trial.

The high-profile attorney has been accused by Weinstein’s legal team of having plans to sue the former Hollywood honcho after his rape trial concludes. During closing arguments, Weinstein’s lead attorney Donna Rotunno said Allred sits in court every day “because she knows there is a pot of gold at the end of this criminal trial.”

Throughout the trial, Weinstein’s lawyers insinuated that the female accusers want to get money out of Weinstein. During cross-examination, his attorneys asked multiple women on the stand if they are planning to sue Weinstein after the trial. Miriam Haley — one of the two key witnesses in the case — said she did not have any immediate plans to file a lawsuit, testifying, “It’s always a possibility, but I have no plans… anything is a possibility… I have not considered or planned to sue Harvey Weinstein, at this time.”

Rotunno cast doubt on Haley’s testimony, telling the jury during her closing arguments, “She says she wants to remain anonymous, yet the first thing she does is hire Gloria Allred.” “Of course anything is possible,” Rotunno said, facing the 12 jurors. “Civil lawyers give scripts to their clients so that they don’t have to admit to you that they’re looking for money.”

Speaking to Variety, Allred says she has not been retained by her clients Haley, Annabella Sciorra or Lauren Young to sue Weinstein.

“I’m not retained for that purpose by any of the three at this time,” Allred responded when asked this week if any of her clients are planning to sue Weinstein. “This is all speculation.”

Allred says Weinstein’s defense has presented an empty argument, providing no backing to their claim that her clients plan to sue the fallen mogul.

“They never presented even one iota of evidence in the form of a retainer agreement or anything, which would demonstrate that I was retained by [Miriam Haley] for the purpose of suing Harvey Weinstein,” Allred said. “And so, like many other arguments the defense presented, it’s just a lot of hot air, it’s spin, with no factual support whatsoever.”

“What they argued is,” Allred continued, speaking of the defense, “‘Well, if he’s convicted, then actually that extends the statute of limitations, might you sue then?’ Well, I mean, I think she testified anything is a possibility… she didn’t say she would… so the idea that based on an ‘if’ and ‘maybe’ and ‘who knows’ that that’s some kind of evidence of something, it’s absurd.”