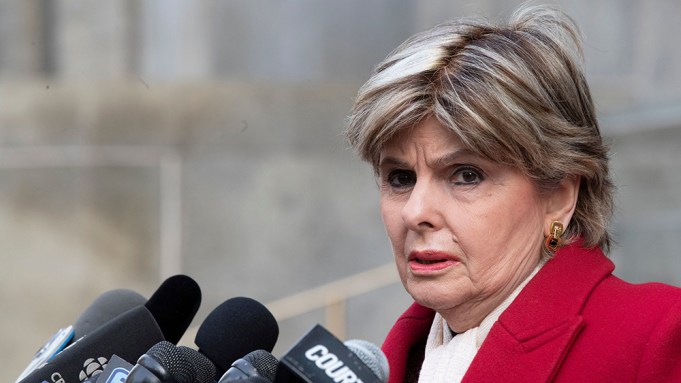 Shortly after Harvey Weinstein accuser Miriam Haley took the stand and testified that she was sexually assaulted by the fallen movie mogul over a decade ago, her attorney Gloria Allred ripped apart Weinstein’s defense team, speaking to press outside of the courthouse.

During the six-hour testimony, Haley told the jury that Weinstein forcibly performed oral sex on her in summer 2006. She also testified that on a separate occasion later that summer, the two had intercourse she was not interested in, though she did not resist because she felt “numb” during the incident where she says Weinstein forced himself on top of her. “He pulled me and led me onto the bed and I just physically laid there,” Haley said on the stand.

When Haley was cross-examined by Weinstein’s defense, his attorney Damon Cheronis provided evidence of phone logs and email correspondence between the pair, questioning why she cordially kept in touch with Weinstein after her alleged assaults. She explained she was hopeful of maintaining a professional relationship with the high-powered Weinstein, who had given her a job opportunity and employed her as a production assistant on the set of “Project Runway,” which was produced by the Weinstein Company.

During a heated moment in the midst of cross-examination, Cheronis bluntly stated, “The truth is that you had a consensual relationship with Mr. Weinstein.” Haley denied his statement.

Haley retained Allred as her attorney, which came up as a point of contention during cross-examination with Cheronis asking if she is planning to sue Weinstein.

Asked by Variety outside the courthouse if Haley has plans to sue, Allred said that’s not her client’s focus — at the moment.

“As she said, she has no plans to do that at this time. We’ll have to wait and see,” Allred told reporters on Monday. “She hasn’t done it. I’m not retained for that purpose. And we’ll have to see. Her focus is acting in the interest of justice, which she did by testifying today.”

The high-profile attorney explained that while her client did not want to have sexual intercourse with Weinstein, the second encounter in 2006 when they had sex is not being qualified as rape because she did not resist.

“It’s not charged as raped. She said she didn’t resist,” Allred said. “The charge has to do with criminal sexual act in the first degree of felony and that has to do with her allegation of forced oral copulation.”

In court on Monday, Weinstein’s attorney Cheronis said, “You say you were sexually assaulted on July 10,” adding that on July 26, 2006, “There was some kind of sex that was not forced, but that you weren’t interested in?” Haley answered, “That’s correct.”

Cheronis also took issue with the fact that Haley did not disclose the second encounter when she first came forward with her story in an Oct. 2017 press conference, during which she revealed the oral sexual assault. She then went onto Megyn Kelly’s NBC show to share those allegations during a highly publicized television interview. Cheronis questioned why Haley did not initially reveal all of her allegations against Weinstein when she broke her silence to the press, and instead waited to speak to a grand jury with further allegations of the encounter when sexual intercourse took place.

Allred explained why her client did not reveal every detail of her allegations during their 2017 press conference.

“Why didn’t she talk about everything? Why didn’t it go on for hours and hours and hours? Because it was a press conference, and we’re not going to sit there for hours and hours and hours,” Allred said. “She told what she felt was the most significant act that she alleges that Mr. Weinstein inflicted on her, and that’s it. Now, in the court of law, she is happy to answer everything and anything, and has. And they know that. I think their real beef is that she dared to break the silence and make that allegation, which went around the world and is truly shocking and disgusting and humiliating. And that’s the allegation of what somebody in power did to her. So we’ll see what the jury has to say.”

Allred continued, “I guess they got really upset when she did a press conference and let the world know what she alleged happened to her because, I guess, women are supposed to suffer in silence and be quiet and be good little girls and just accept it and not tell anyone so that anyone who is a predator can just continue to prey on other women. Well, women are not going to do that anymore. It’s over. It’s not happening.”

“I just want to say we’ve heard every rape myth practically in the book today,” Allred said. “And suddenly, she’s supposed to bare all the consequences of what is alleged to be his criminal act…even though the allegation is that she’s the victim of his criminal act. It’s all about putting the blame on women.”

Allred added that the defense feels threaten because the prosecution is presenting a strong case.

“They’re paying a lot of money to defend Harvey Weinstein. You’ve got five lawyers sitting there. So far, I don’t think they’ve made any significant impact on these witnesses. These witnesses look right at the jury and they tell what they allege happened to them, and I don’t see any backing down. I don’t see the defense being successful in their effort to shame the and blame them. They’re standing their ground,” Allred said. She quipped, “And the people who should be ashamed is the defense team, trotting out these old, tired myths that they must want it — I guess because Mr. Weinstein is such an appealing person, they must have wanted it.

“Obviously the defense is playing that old script line that the only victim in this is Harvey Weinstein,” Allred continued. “And I guess that all of the witnesses so far must be lying because they can’t remember every single detail. When somebody is lying, they can say the script exactly every single time. When someone is telling the truth sometimes, especially if it’s over a long period of time…there might be some mistakes in memory about some minor things. It doesn’t mean it occurred.”

Allred’s statements to the press echoed the testimony of Dr. Barbara Ziv, a forensic psychiatrist who the prosecution brought in as an expert witness last week to educate the jury on comment misconceptions about sexual assault victims, known as “rape myths.”

Allred praised her client for being courageous to take the stand.

“I think the jury could feel it when she talked about her allegation that he forced himself on her and forced her into bed, allegedly pulled out her tampon even though she said she was on her period, and she testified that she said no, but it didn’t stop him. Why? Because he’s Harvey Weinstein! And he wants what he wants and he expected to get what he wants when he wants to get it. It’s just as simple as that,” Allred said.

“I’m telling you, it takes an enormous amount of courage to be a women, to be a victim, to testify and be cross-examined in a court of law,” Allred said. “We’ll see whether the jury decides that Harvey Weinstein is the real victim or not.”