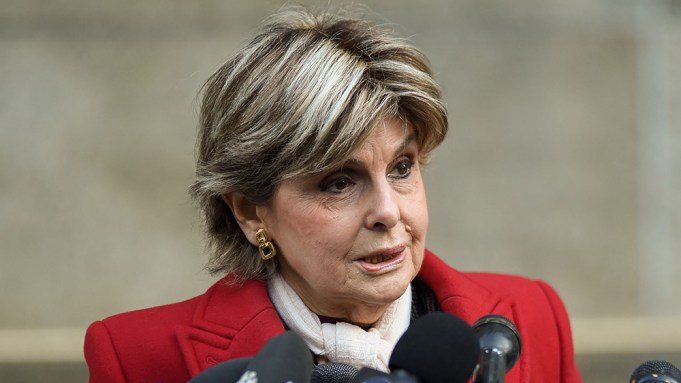 Women’s rights attorney Gloria Allred has never been accused of being press shy. But on Wednesday, while the jury was deliberating in the Harvey Weinstein rape trial, she was accused for serving as a mouthpiece for the prosecution, prompting one of Weinstein’s attorneys to request a gag order for the media-savvy Allred.

Damon Cheronis was immediately denied his request for a gag order, with the judge responding, “Well, I wish I had that kind of authority,” then swiftly dismissing Cheronis’ request.

Early on in the trial, Justice James Burke ruled that the defense and prosecution should refrain from speaking about the witnesses or jury to the media. Cheronis claimed that Allred is essentially a megaphone for the prosecution’s case, repeatedly speaking to the media about her three clients, Annabella Sciorra, Miriam Haley and Lauren Young, who have all testified against Weinstein in the New York criminal trial.

There is no ban on witnesses’ attorneys speaking to the press.

On Tuesday, right before deliberations began, the prosecution accused Weinstein’s lead attorney, Donna Rotunno, of jury tampering by writing an op-ed in Newsweek. The judge gave Rotunno a mild slap on the wrist, reminding the defense not to speak to the media, but did not take any firm action. Rotunno told the judge the piece she wrote (titled “Jurors in My Client Harvey Weinstein’s Case Must Look Past the Headlines”) was not specifically about the jury in the Weinstein trial, but rather about the jury system as a whole.

Last week, the prosecution slammed Rotunno for an interview she participated in for the New York Times podcast “The Daily,” in which she generated headlines for saying she has never been a victim of sexual assault because she never put herself “in that position.” The interview aired on Feb. 7, but was pre-taped.

Speaking to Variety, Allred shared her take on Rotunno’s frequent communication with the media.

“Donna Rotunno has made a lot of statements,” Allred tells Variety. Asked whether she believes Rotunno’s op-ed in Newsweek qualifies as jury tampering, Allred says the defense should not be trying to appeal to the jury, just as the jury is about to deliberate. She adds, “I don’t think the prosecution should do it. I can do it because I’m a private attorney. It’s not something she should do.”

“I just wonder, did Donna Rotunno do that because she’s feeling insecure about her final argument to the jury?” Allred continues. “Maybe she felt it didn’t do enough impact [so] maybe she should try again by doing an op-ed piece.”

Allred says Rotunno clearly knows that the jury has been instructed not to read, watch or listen to any news relating to the Weinstein case, and that the media should not impact their verdict.

“So here she is using the media to try to have an impact, arguably, on this jury — not just on all juries in general, but on this particular jury, in which the defendant, Mr. Weinstein, is facing criminal charges,” Allred says. “So I think it’s really questionable, and so, she got called out on that by the prosecutor.”

“No, I don’t think she should have done it, but she’s getting paid a lot of money, so she probably doesn’t want to sit there as a garden statue,” Allred says.

“I don’t think she’s helped herself with some of her media appearances, where she talked about how she’s never been a sexual assault victim because she wouldn’t put herself in that position.” Referring to her own personal sexual assault, Allred adds, “I didn’t put myself in that position when someone put a gun to my head and raped me when I was in my 20s. I just think that’s insulting to women. I think it’s insensitive, and it’s blaming victims for their own rape or sexual abuse so I don’t think it’s appropriate. I don’t think she’s helped herself with any of this. Obviously, she’s trying to portray her client as the real victim, the only victim. We’ll find out whether the jury buys that or not.”