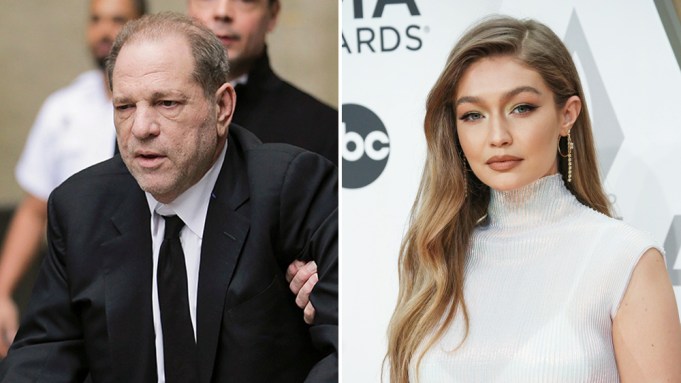 Model Gigi Hadid was among those called for jury service on Monday in the Harvey Weinstein trial.

Hadid was spotted in the hallway entering the courtroom. Hadid is friends with Cara Delevingne, the model and actress who accused Weinstein in October 2017 of trying to kiss her during a hotel room meeting.

In court, Hadid told Justice James Burke that she had met Weinstein. Burke asked if she could be fair, and she said she could.

She later said she had also met Salma Hayek, whose name is on a list of people who may be relevant to the case.

“I think I’m still able to keep an open mind on the facts,” Hadid said.

She was seen leaving the courtroom after noon. She did not comment to reporters as she left the courthouse. She is expected to return for further screening on Thursday.

Jury selection in the Weinstein case entered its fifth day on Monday. So far, more than 100 jurors have filled out questionnaires asking about their backgrounds and their ability to be impartial in the case.

Weinstein’s attorneys asked on Friday for more time to question jurors one-by-one, but Burke has said that will not be necessary. On Monday, he said that the multi-staged procedure has been working well.

Weinstein is facing five counts of rape and sexual assault, and could serve life in prison if convicted. He was also charged in Los Angeles last week with four additional sex assault counts connected to two incidents in February 2013.

Burke has said he hopes to have a jury seated by the middle of next week. Opening statements have been tentatively set for Jan. 22.