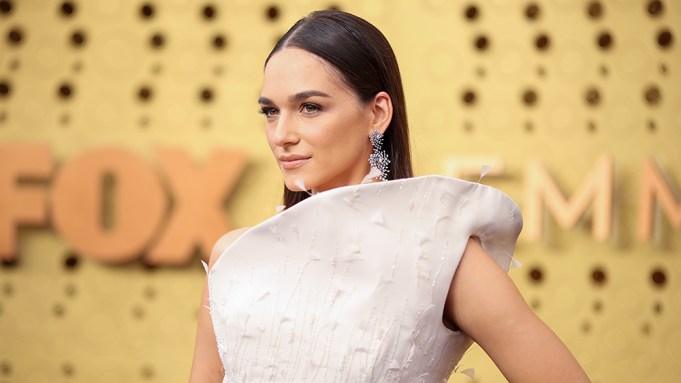 Weinstein’s efforts left Mann sobbing, before she eventually fled the room at the Montage hotel, Postacchini said on the stand in New York Supreme Court on Tuesday.

“I remember crying,” Postacchini said. “[Jessica] was crying in the fetal position on the ground, crying, and so I just…tried to calm her down.”

Postacchini said she arrived at the Montage hotel with the understanding that she was meeting Weinstein for a drink downstairs in the lobby bar. When she arrived, Weinstein emailed her and asked her to come upstairs to the hotel suite.

“I did not have any idea that there would be a woman in the room,” Postacchini testified, adding that she felt “tricked” by the situation.

Postacchini said Mann ran out of the hotel room in a highly emotional state, leaving Weinstein angry and confused. “I remember him saying, ‘What is she doing?’” said Postacchini, as she attempted to imitate the movie mogul’s gruff tone.

Postacchini first met Weinstein at the Venice Film Festival, and per Weinstein’s referral, she auditioned for a Weinstein Company project, but did not get the role. Another time, she met Weinstein for a drink in London. When she returned from London to her home in L.A., she received an invitation to attend a Jan. 2013 Golden Globes party, which was the first invite she received from The Weinstein Company. At that party, held at Soho House, Weinstein introduced Postacchini to Mann. “It was more just shaking hands,” Postacchini said the quick meeting, noting that she barely spoke to Mann at Soho House. A few days later, she was propositioned for a threesome with Mann at the Montage hotel.

Under cross-examination by Weinstein’s attorney Damon Cheronis, Postacchini said Weinstein did not force her to come up to his room at the Montage, but said she felt uncomfortable by his request, since she was told she’d be meeting him for a drink the lobby.

“Obviously I felt that I was in a situation that I did not want to be in,” Postacchini said.

Cheronis asked Postacchini if she had any other sexual encounters with Weinstein, prior to the night at the Montage hotel. She admitted that when she once was supposed to meet Weinstein for a brunch meeting, he showed up in a bathrobe.

“Under his bathrobe, he was naked and asked for a massage,” she revealed for the first time. Weinstein’s lawyer questioned why she hadn’t told the D.A.’s office about that prior to her testimony on Tuesday, and she explained, “To be honest, I just wanted to forget about whatever had happened and I wasn’t to move on with my life and I didn’t want to be involved.”

Cheronis noted that Postacchini stayed in touch with the movie producer after the incident with Mann. He referenced an email where she asked if he could help her get cast in “Marco Polo,” a Netflix series he was producing, also reaching out to him during the holidays and notifying him when she was at the Cannes Film Festival in 2015.

Postacchini, who has a notable social media presence with over 115,000 Instagram followers, has appeared in TNT’s series “The Last Ship” and “The Alienist.” Most recently, she had a notable role on Sacha Baron Cohen’s Emmy-nominated Showtime’s series “Who Is America?” and attended the Emmy awards in 2019 for the show.

Mann is in the midst of a grueling and exhaustive cross-examination process, which began Monday, but was halted early when she had a panic attack on the stand. She has accused Weinstein of rape and sexual assault, and is a key witness in the criminal trial against the movie producer. She underwent two days of testimony, breaking down at various points, while also claiming that Weinstein raped her and forcibly performed oral sex on her in graphic testimony. Mann admitted that she did have consensual sexual relations with Weinstein at other points in their association. Weinstein’s attorneys have seized on warm email exchanges between the two to argue that Mann was a willing participant in their affair and that she wanted to use Weinstein to advance her career.

After her panic attack yesterday, which had Mann leaving the courtroom sobbing in tears, Mann is set to resume her testimony today, but Postacchini testified before her. Weinstein’s defense took issue with Postacchini taking the stand in the midst of Mann’s cross-examination, but the D.A.’s office asked to call in Postacchini out of order, since she has to leave New York City today for an audition in Los Angeles. Lead prosecutor Joan Illuzzi said Postacchini came to New York specifically for the trial and given the unexpected length of Mann’s testimony, she has been waiting to testify for two days, but did not plan on being in town this long.

Weinstein is charged with rape, criminal sexual act and two counts of predatory sexual assault related to Mann’s allegations and those of Miriam Haley, a former production assistant. He faces life in prison if convicted. He is also facing criminal charges in Los Angeles and London.