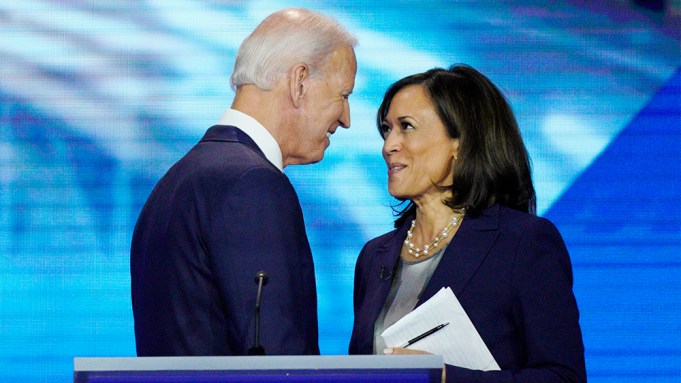 The 2020 Democratic National Convention has announced musical performers for its (virtual) stage: Leon Bridges, The Chicks, Common, Billie Eilish, Jennifer Hudson, John Legend, Billy Porter, Maggie Rogers, Prince Royce, Stephen Stills and more, according to the announcement. The musical acts will be featured across all four nights of the convention, which will air August 17-20, 2020.

“In just three days, we will kick off a Democratic National Convention that will look and feel very different than past conventions. It will truly be a convention across America, and these incredible artists will help us tell the story of where we are as a country today under Donald Trump’s failed leadership, and the promise of what we can and should be with Joe Biden as president,” said Stephanie Cutter, 2020 Democratic National Convention Program Executive. “These artists are committed to engaging with, registering and mobilizing voters to get us over the finish line in November.”

Biden, the presumptive Democratic nominee announced California senator Kamala Harris as his running mate earlier this week — a move that was met with enthusiasm by many of her longtime supporters in the music industry, and now artists have signed up to support the ticket as well.

The choice of certain performers is both demographically strategic and sends a message of its own: Perhaps most strikingly, it includes the Chicks — who recently changed their name from the Dixie Chicks to avoid the Civil War-era connotations of the word “Dixie” — who were one of the top country acts in the world until singer Natalie Maines’ 2003 criticism of then-president George W. Bush essentially saw them banished from the country end of the business. Common and last week’s Variety cover star Legend are both outspoken and politically motivated for causes aligned with the Democratic campaign. Actor-singer Billy Porter is openly gay; New York native Prince Royce represents the Latinx music industry and has often spoken about equal treatment for all. And the age range of the performers is thrown into dramatic relief by the presence of 18-year-old Eilish — who shies away from political commentary but has been outspoken in support of many environmental and other Democratic-leaning causes — and 75-year-old Stills, who wrote and sang Buffalo Springfield’s 1967 protest anthem. “For What It’s Worth.”

The announcement notes that the performers are intended to reach a new audience. “The performances — ranging from renditions of the national anthem, to American classics, to new songs — are expected to draw in new viewers who may not have tuned into conventions of previous years, ensuring the 2020 Democratic National Convention will engage more Americans than ever before,” it states. At the moment, the list of performers is more than half people of color.

The Democratic convention will be “anchored” in Milwaukee, but the four-night mid-August event will “include both live broadcasts and curated content from Milwaukee and other satellite cities, locations and landmarks across the country,” as organizers have advised people members of Congress and delegates to stay away from the convention in an effort to stem the spread of coronavirus.

While no details were provided in the announcement, it seems likely that the musical performances will be staged virtually, rather than taking place at the Wisconsin Center, where the convention was moved last month from the much larger, 17,000-capacity Fiserv Forum basketball arena.

In addition to the top-billed acts, Monday night will feature a performance of the National Anthem from youth choir members across America. DNCC partner Commonwealth Youthchoirs has assembled a 57-member choir of young people from all walks of life, and each member will represent one of the 57 states and territories as they perform from remote locations across the nation.

The Democratic National Convention will take place over four nights from August 17-20, 2020. Convention programming will air from 9:00-11:00 PM Eastern. Additional speakers, including national leaders, advocates and celebrities will be announced in the coming days.

The official live stream for the 2020 Democratic National Convention will be hosted on DemConvention.com, where viewers can also find the full convention schedule, a digital toolkit to get involved, more resources for viewers, delegates and the media and additional plans and details.