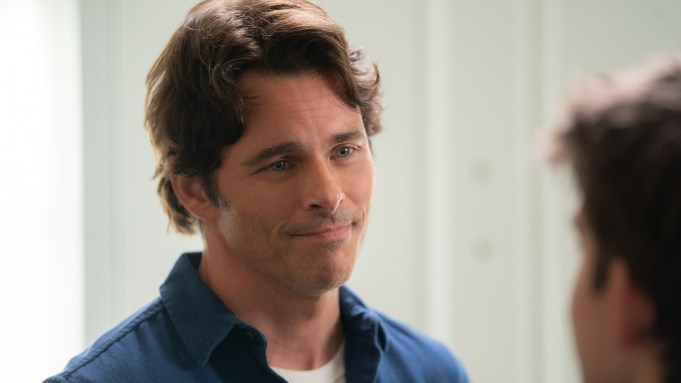 The title of Netflix’s dark comedy “Dead to Me” suggests that mortality is a relative state, but it’s still a bit surprising to see James Marsden — whose character ends season one face down in a swimming pool — return for season two.

It wouldn’t be “Dead to Me” if there wasn’t a twist. Marsden is no longer playing Steve, Judy’s (Linda Cardellini) wealthy, aggressive former fiance. Instead, he’s Ben: Steve’s sweet, dorky, not-quite-identical twin brother.

In the latest episode of Netflix’s “Scene Stealers,” Marsden joins “Dead to Me” casting directors Sherry Thomas and Russell Scott to discuss the unusual casting coup that changed the stakes of creator Liz Feldman’s half-hour show.

Marsden says he wasn’t planning to return to “Dead to Me,” but may have planted the seed for the move.

“After the show took off, I remember writing Liz a congratulatory email, and I said: ‘Is there any way you can sustain a head injury, plus drowning, and still live? Is there any world where someone can survive that?’” he jokes. “‘I’m glad the show is doing so well, but I’m gone now. How do we fix that? How do I come back?’ She laughed, and was very graceful. But later on, she emailed me back and said ‘You know, you’ve got me thinking…’ She pitched me this idea, and I was in.”

According to Scott, “We had no idea he was coming back for season two until we were pretty close to shooting. And we were like: ‘What is going on? Why are we talking about James? He’s dead!’”

When Thomas and Scott were originally casting “Dead to Me,” they had no idea they needed to find an actor who could play both a self-assured, Mafia-connected attorney and his polar opposite. But Marsden was definitely their first choice for Steve. According to Scott, “James fit the bill as the character was written.”

“When we were talking about the components of the role,” Thomas says, “it was going to be very complex. I don’t want to embarrass anybody, but Liz was adamant that this particular person be very handsome and very charming but also be a fantastic actor with depth.”

Marsden deflects the compliment: “When was he cast, and when was he let go?” he jokes. But getting more serious, he explains why the role of Steve attracted him. “To me, bad guys are no fun unless they’re fun. Meaning they can’t just be a jerk. I have to be able to make fun of them and pull the comedy out of them. Reading the scripts, it was hilarious how arrogant and cocky and manipulative he was — from an actor’s perspective, this was a gold mine.”

Marsden plays two memorable supporting roles, but “Dead to Me” is anchored by the lead performances of Christina Applegate and Linda Cardellini. The two play women with dark secrets who befriend each other at a grief support group.

“I had so much fun with Christina and Linda,” Marsden says. “There was such an ease on set. Everyone just clicked and got it. To me, it’s a testament to the writing. When it’s really sharp and the humor is really intelligent, it just makes our job that much easier and that much more fun. It’s like this perfectly constructed playset. The words just kind of flow. And the dynamic between Linda and I in the first season, and between Christina and I conversely in the second season…the words leapt off the page. We all just looked at each other without speaking and knew what it needed to be.”

In season one, Steve was usually terrorizing Applegate’s character, but in season two, she and Ben have a completely different dynamic.

“It was very different,” Marsden says, “and that’s the kind of thing that makes you excited as an actor. The stuff that I do well is jumping all over the place from genre to genre, and playing different extremes. This came my way by Liz saying: ‘You can be the sweeter brother who’s kind of dorky, and he has a heart problem, but the irony is that his heart is much larger than Steve’s ever was.’ He’s a good man. He’s sympathetic. He listens. He was always living in Steve’s shadow. I grew up with two brothers very close in age, and I know how competitive that is, and how you can feel like the runt of the litter if you’re not the family superstar. Ben is that guy. Usually, that breeds a better human being, and Ben, for all his dorkiness and his awkwardness, is a good man.”

“I liked that contrast in the characters,” Marsden adds. “[Christina] is so fiery and angry and annoyed, and brilliantly portrays that. How does this sort of sweet guy, who looks identical to the guy she killed, find the door to her heart?

There are subtle differences in the way Marsden plays Steve and Ben. “Ben is a little stiffer and more uncomfortable in social situations,” he says. “Whereas Steve, you put him in a social situation and he immediately wants the microphone.”

Thomas and Scott struck a goldmine when they cast Marsden for “Dead to Me,” but what are the things they look for in auditions?

Thomas says: “For me, it should always be about the work. I don’t need costume, I don’t need props, I don’t need anything. It’s really about what’s happening in the scene. As a casting director, you learn to see the soul of an actor when they come in, and that’s what I care about. That’s the inspiring part of this job.”