Parkland Activist David Hogg on Trump, Biden and What’s at Stake in the Election 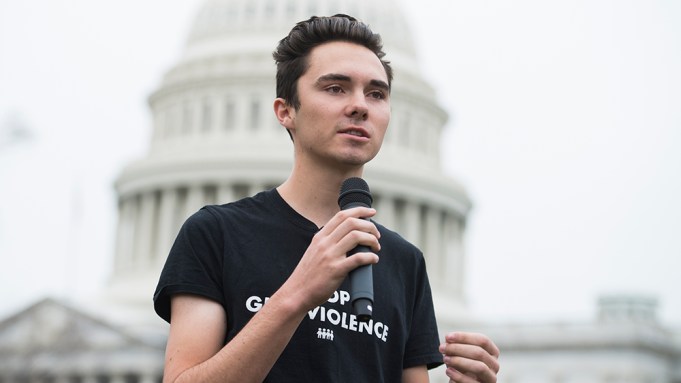 Like so many other students around the world, David Hogg is studying from home, navigating the strange new world of the coronavirus pandemic, while getting ready for the first election in which he can vote.

Unlike many of his peers, Hogg, who has more than one million social media followers, is one of the most recognizable social justice activists in the world, garnering praise and gratitude from some, while facing criticism and conspiracy theories that have led to death threats from others.

At just 18 years, Hogg’s life completely changed after the deadly shooting at Marjory Stoneman Douglas High School in Parkland, Fla., which took the lives of 17 people. As the horrifying tragedy captured the nation, Hogg was thrust into the international spotlight. Along with his fellow survivors, Hogg unexpectedly took on a life of activism, using his newfound platform as a megaphone to spread awareness for gun reform — all while dealing with the trauma he had experienced in Parkland.

Today, at 20, Hogg and his peers have become some of the most recognizable faces among Gen Z, a generation that is more plugged-in to social justice issues than ever before. The Parkland survivors pulled off the largest youth demonstration of all-time with March For Our Lives in 2018, and founded the advocacy group, Never Again MSD. And now, leading into the 2020 election — the first for which their generation will cast ballots — the young activists launched the March For Our Lives Voting Guide.

In the days leading up to the presidential election, the youth voter turnout has been surging with the highest early voting numbers ever seen among young voters, signaling a generation that is defined by activism and the desire for change.

Hogg tells Variety he’s hopeful this election will bring out the largest numbers in voting history, adding, “It’s kind of unfortunate that it’s gotten to this point, that young people are voting because they realize that our lives are on the line with every policy that these elected officials make. Our entire future is on the line.”

Hogg stars in the new documentary “Us Kids,” now available for streaming, which follows the Parkland activists as they launched the March For Our Lives movement. Now at Harvard, he’s continued to be an advocate for gun legislation, but expanded his interests to push for other issues impacting young people such as racial justice and climate change.

“From gun violence to racial injustice, to immigration justice and everything else, they all affect us,” Hogg says, when asked about the biggest issue facing young people heading into to election. “But I think what all of those culminate around, is the fact that we don’t have what I would consider to be morally-just leaders in office right now that represent the people and not corporations or organizations like the NRA. I would say that form of political injustice is ultimately what ties all these different forms of injustice together.”

As gun sales have increased during the pandemic, Hogg expresses his concern over daily instances of gun violence, specifically with the rise of mental health concerns, during the pandemic. (In the first three months of COVID-19 in the United States, researchers said more than 2.1 million firearms were purchased, and this summer, the FBI said federal background checks for gun purchases surpassed 3.6 million, one of the biggest monthly tallies ever.)

Hogg talked to Variety about his new documentary, what he wants to say to President Trump about gun reform and why he’s voting for Joe Biden, despite the fact that the former Vice President wasn’t his first choice.

Your new documentary, “Us Kids,” follows you and fellow youth activists as you launched the March For Our Lives movement in 2018. The world was a completely different place at that time. How does the movie play now?

It’s super important to show young people that our vote can have an impact. It’s one of our many tools that we need to use in what I call our social change-making toolbox. We have to use every tool that we can to try to create a change as quickly as possible because people are dying every day in this country.

This summer, you tweeted, “I know Biden and Harris were not the first pick of many young people, myself included.” And then you listed the reasons why you are personally still voting for them.

I know a lot of young people that were understandably upset that their candidate didn’t win, be it Warren or Bernie or anybody else. Young people were disappointed because they felt like they had put in a lot of work. Vice President Biden wasn’t necessarily my first pick, but the fact of the matter is it’s not a question so much anymore of who the candidate is. It’s a question of, are we going to have a democracy in four years? I truly am concerned about that.

After it became clear that Joe Biden was going to be the nominee, we built a coalition with other youth-led social justice organizations and sent a letter to the campaign, talking about our priorities and basically saying, “You weren’t necessarily many of our first pick, but we want to work with you to make sure that your policies are going as far as we can get them to prevent climate change, as much as possible, from continuing. And to prevent gun violence from continuing. And to promote immigrant justice, and all these other things, as well.”

Have you heard personally from Vice President Biden?

No. The only time that I’ve talked to him personally was when we were at our Gun Violence Prevention Forum that we had in Las Vegas.

Have we gotten everything that we wanted out of the Biden campaign? Definitely not, but they have called us in. I think that shows that they’re willing to play ball. Although I don’t agree with Joe Biden on everything, one thing I will say is that he does care.

Just the level of empathy, in comparison to Donald Trump, is unbelievable. Trump still hasn’t come to Parkland. And it’s been, I think, 982 days now, since the shooting. He came to a nearby hospital and spent 35 minutes there, took a photo and then posted it for a fundraising email. And then, played golf during the victim’s funerals. But Joe Biden actually showed up. He wasn’t an elected official. He doesn’t have the power to do what Donald Trump has the power to do, at least right now, but Joe Biden showed up.

Have you ever heard directly from President Trump, or anyone from the Trump administration, in regards to your work toward gun reform?

The only time that I ever heard from someone was when one of their staffers called me, shortly after the shooting, and I was obviously really shook up and, I guess, in a state of shock.

They invited me to come to the listening session, and on that call, I was just so angry. I frankly felt that nothing was going to come of it, it was going to be a PR stunt where Trump tried to act like he cared, at all. And then, even if he promised something, I realized the power of the NRA. I said to the person on the phone, “Donald Trump needs to listen to the screams of the children of this nation, and the screams of this nation, and stand up and actually do something about gun violence,” or something along those lines, and I hung up on them. Honestly, part of me does regret that because I wish I could have literally gone there and called out Trump.

You’ve made it clear many times that you are not against the Second Amendment. During the pandemic, gun sales have increased. What are your thoughts about that?

The fact of the matter is the vast majority of people that own a gun are not part of Seal Team 6, and they don’t have that training. And a lot of the time, the gun is more likely to be used on you, if there actually is an invasion, or used on somebody that’s a family member that you’re mistaking for an intruder that you accidentally end up shooting because you thought they were an intruder.

There have been some studies that showed that, even just the presence of a gun in the house, can make the possibility or the likelihood of somebody killing themselves over five times as high than if there wasn’t a gun in the house.

I’m worried about kids getting ahold of these guns, playing with what they think is a toy, but is in fact not.

Everyone has gone through some level of a mental health issue over the course of the pandemic. But the combination of guns with that just makes it really concerning to me.

In early 2020, before schools and businesses had shut down with the pandemic, mass shootings were on par with those in 2019. How can we prevent mass shootings?

These shootings are still going to happen every day, until we get the right laws to prevent them in the first place. I wish that wasn’t the case. I wish that they would have stopped after Parkland. I wish they would stop right now. I wish we could open up after COVID, and no one would ever have to worry about their child dying in a school shooting, or their husband that teaches at a school dying there. And I wish that nobody had to live in fear of gun violence.

But the fact of the matter is, we haven’t made the significant policy strides that we need and the cultural change that we need to stop that.

(Editor’s note: This interview has been edited and condensed for clarity.)