Coffee Heroes Pour Their Hearts Into Jobs for People With Disabilities 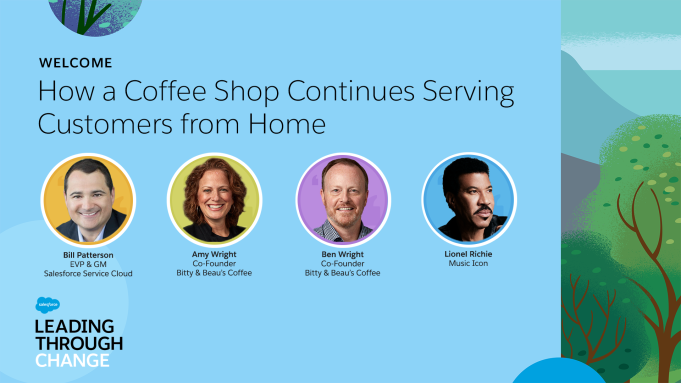 The pandemic’s rallying cry, “We’re all in this together,” may blur the fact that while everyone has the same concerns — personal well-being; protecting others; economic security — we don’t all share the same needs. Members of some groups face challenges that aren’t always addressed by more general measures.

Case in point: people with developmental disabilities, numbering some 200 million globally. Though they are as vulnerable to COVID-19 as anyone else, some may face challenges in the shift to social distancing practices or quarantine. Those who were fortunate enough to secure employment (less than 20% of Americans with developmental disabilities, by some estimates), only to find it suddenly, inexplicably withdrawn, might need specialized support.

As part of the ongoing informational series “Leading Through Change,” executives from Salesforce spoke with Amy and Ben Wright, co-founders of North Carolina-based Bitty & Beau’s Coffee, whose five shops are run by employees with intellectual or developmental disabilities. They told their story, which is both powerful and cautionary, in a webcast that ended with an emotional performance by musical guest Lionel Richie.

The Wrights named their company after their two youngest children, both born with Down syndrome. From a 500 sq. ft. space in Wilmington with 19 employees in early 2016, they have expanded to four other Southern locations and, in so doing, become national figures in the effort to swell awareness and options for people with disabilities. Last year the company was honored with Salesforce’s Service Equality Award. The White House invited the Bitty & Beau’s Coffee team to speak to an April 28 meeting of small business owners; there, they proclaimed that they are “not broken” by the COVID-19 crisis.

Bill Patterson, Salesforce executive VP for customer relationship management, extols the Wrights’ “purpose-driven business” that is “so much more than coffee. It’s about accessibility. It’s about making the world a better place where everyone has an opportunity.”

But then came Coronavirus. Like so many others, Bitty & Beau’s Coffee was forced to shut down its shops temporarily and lay off their staff, 120 in all. That’s painful for any employer, but it’s even more so when some workers may not be able to comprehend why they’re being let go.

“We’ve had to be very careful,” Ben asserts, “to do our best in explaining that it’s temporary, that it’s not their fault, and we’re going to do everything we can to remain viable and bring them back to work just as soon as possible.”

That theirs is the very first job for most of the workers adds extra anxiety, Amy points out. “To have the excitement, and the ability to start saving and planning for their futures, and then have to put all that on hold has been a scary time for everybody.”

The crisis prompted the entrepreneurs to bring their parenting skills into the workplace. “I think about them as family members and treat them as such,” Amy reveals. “It really does make a huge difference, and I believe brings out the best in them.”

Just as important has been the opportunity to contribute to the Wrights’ pivot from an in-person store experience to an e-commerce hub. Bitty & Beau’s Coffee now vends coffee and merchandise online — “#NotBroken” T-shirts are particularly popular — and as Amy proudly notes, “with every order we include a handwritten note from one of our employees, so that customers still feel connected to our staff.” A ramped-up newsletter and social media campaign share positive stories about the workers, whose interviews help keep the brand in the public eye.

Encouraged by Patterson to offer some advice for other small businesses in this difficult time, Ben Wright cites his “three C’s: communicate, communicate, communicate” — meaning letting everyone, from employees to vendors to customers, know what the business is trying to do. (He wistfully adds a fourth C, “capitalize”: “If you can find some additional capital somewhere, somehow, temporarily, find it!”)

But the topic keeps returning to the current crisis, and the importance of a one-world outlook. Lionel Richie, introducing three of his feel-good hits, quotes from his song “We Are the World,” written 35 years ago for African relief: “There’s a choice we’re making / We’re saving our own lives.” The struggles of others around the globe has come home. “Now it’s happening here,” he insists, and what’s needed is “compassion. It’s not about ‘your tribe,’ it’s about mankind. If we can understand the fact that we live here together, the better off we’ll be.”

Living here together is central to the spirit of Bitty & Beau’s Coffee, which the Wrights insist will outlast any pandemic. What began as a mission to give jobs to locals with disabilities, Amy says, “has evolved into more of a human-rights movement, and showing the value of the lives of [people with] disabilities to the world.” They’re determined to prompt other employers to follow their lead and build a workforce with talented folks traditionally overlooked.

Salesforce’s VP of trailhead evangelism, Leah McGowen-Hare, lauds the Wrights’ accessibility-for-all mission as a “beacon of light and a beacon of hope, for not just small businesses, but for all of us” — praise that the Wrights accept with modesty.

Ben says simply, “We try to meet people right where they are, for who they are.. And I think the whole world sort of is going through this time of figuring it out.”

The entire Salesforce conversation with Ben and Amy Wright, including Lionel Richie’s performance, can be seen above. To see more of Leading Through Change, go to salesforce.com/blog.