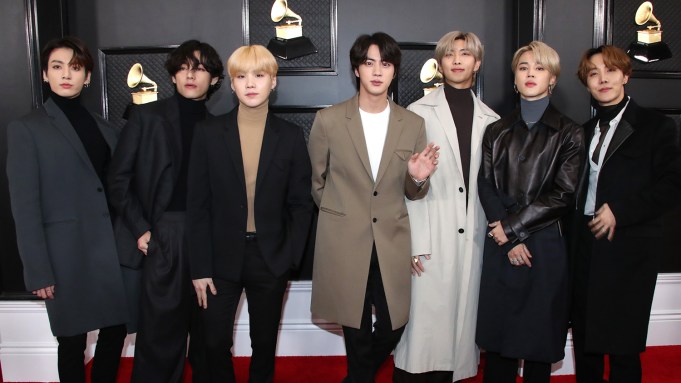 BTS have dropped their second official music video from their new album, “Map of the Soul: 7,” for the song “ON” — and within minutes of it dropping, the song became the biggest YouTube Premiere of all time, with 1.54 million concurrent viewers tuned in for the clip’s debut on YouTube Premieres.

According to the announcement, “The video symbolically depicts BTS’ vow to accept their predestined path as fate and to keep going on, no matter the obstacles. The band’s signature charisma and perfectly synchronized choreography during the video’s dance break is set to attract the attention of millions of viewers around the world. As the global superstars continue to reach new heights, the lead single ‘ON’ sees BTS reach yet a new apex as versatile musical artists on a celebrated seventh year of their career.”

“Map of the Soul: 7” sees the members of BTS continue to reveal their personal stories but with a heightened sense of self-awareness. From RM, J-Hope and Suga ridding themselves of anger from their detractors on “UGH!” to Jimin and V declaring themselves “soul mates” despite their differences on “Friends,” plus Jin’s heartfelt letter to fans on the soaring track “Moon,” and youngest member Jungkook reflecting on growing up in BTS on the euphoric “My Time,” these tracks are previously unseen sides of the member.

While they dreamed about this kind of success, BTS tell Variety they never expected to reach the level they’re at today and that led to questioning. But rather than looking outward or thinking they needed outside help, the guys trusted that continuing on the path they were already on was the right way to go. “Map of the Soul: 7” not only delivers the septet’s most personal tracks, but sees them referencing their past by rebooting and reworking the themes and ideas from early BTS songs to reflect their growth today. New single “ON” is a rework of the early BTS single “N.O,” while “We Are Bulletproof: the Eternal” acts as an extension of their 2013 single “We Are Bulletproof Pt. 2,” while album closer “Outro : Ego” samples parts of the intro from BTS’ debut album, “2 COOL 4 SKOOL.”

The group’s Suga explained the concept behind the album’s title to Variety last week. “We worked together for seven years, there’s seven of us. It’s a lot more than just inspiration, this album contains our stories,” he said. “I think what was different, and what was really fun, was that more of the members participated in this album. Some of the guys who didn’t really participate as much did more and I think that was really significant.”