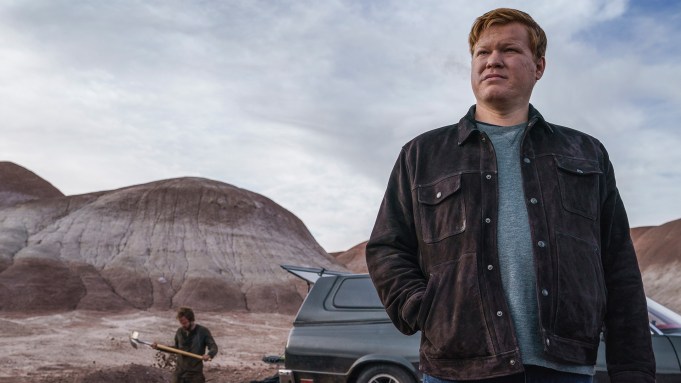 After “Breaking Bad’s” 2013 series finale, a new story about those characters didn’t seem to be in the cards. At least not until 2018, when word leaked of a possible Netflix sequel film.

Even then, details were scarce about which characters might return. Actor Jesse Plemons (“Friday Night Lights,” “Fargo”) thought he was done with his role as sociopathic criminal Todd, who died in the “Breaking Bad” series finale.

“I knew ‘Breaking Bad’ wasn’t a show where my ghost would come back or anything like that so I assumed Todd was dead and that was the last we’d hear of him,” Plemons says in the newest installment of Netflix’s FYSEE TV series “Scene Stealers.”

The FYSEE TV series, hosted by Variety’s Jenelle Riley, pairs the streaming service’s award contenders with the casting directors who helped them get their parts. Plemons joined Sharon Bialy and Sherry Thomas, 2014 Emmy nominees for their work casting “Breaking Bad,” to discuss being cast in the series in the first place and returning for a flashback storyline in “El Camino: A Breaking Bad Movie.”

“I got a cold call from a number I had screened a few times — I thought it was a telemarketer — and picked it up and it was Vince and [producer] Melissa [Bernstein],” Plemons recalls. “They told me they had a script and wanted me to read it so I went to their office and read it.”

Plemons says his first impression of the “El Camino” story was that it fit squarely in the established “Breaking Bad” universe.

“I just immediately had all these memories coming back of what it felt like to read a ‘Breaking Bad’ script,” Plemons says. “They’re totally different than most scripts. In the exposition, he’s really talking to the crew and dangling little pieces of information. … I never thought I would read a new ‘Breaking Bad’ script. I was very excited.”

Bialy says she and Thomas were also surprised to get the call to work on a new “Breaking Bad” project.

“The whole casting process on ‘El Camino’ was done in confidentiality, top secrecy,” Bialy says. “And I think we were so proud of our office that nothing ever leaked, which is really hard to do in this day and age.”

Bialy says much of the work involved juggling the schedules of returning actors, including Plemons, while also casting actors as new characters.

“Every role in a Vince Gilligan project is important,” Bialy says. “A guy who has just a couple of lines … is as meticulously cast as the leading roles.”

Bialy says casting for “Breaking Bad” has always been important because the actors that come into the universe spark Gilligan’s imagination as he moves the story forward.

“It’s really important to make sure you’re casting an actor of great depth and range with a lot of intuition because Vince is gonna write to that and use that,” Bialy says. “He may not know on day one where Todd is gonna end up, but when you get an actor of Jesse’s talent then you know it’s gonna keep going.”

Plemons recalls coming into “Breaking Bad” in season five after “a fairly long dry spell” between roles and being confused by the dummy scene used in his audition.

“It was sort of a military scenario and I just remember thinking, ‘This is not what I thought ‘Breaking Bad’ was. Did they go to Iraq or something?’” he recalls. “There are those auditions where you leave and you think … I don’t care if I get it or not, that was just a fulfilling audition. I hadn’t been able to play a scene that was that good in a while.”

Soon after he landed the part, Plemons was en route to Albuquerque, New Mexico, for filming.

“I was on the plane to New Mexico looking [through the script] for the character Paul, which was what the character was [named] when I auditioned and then realized it was Todd — no one even told me that, by the way, you’re playing Todd, not Paul — so then it was just a matter of really trusting my instincts. Because no one gave me anything because I wasn’t a regular. … I just kept thinking, ‘I can’t come on the show and screw it all up.’”

No worries there. Plemons made Todd (whose nicknames among fans included “Creepy Todd” and “Meth Damon”) endearing — despite his willingness to kidnap and kill.

“A great actor is nuanced, and they’re layered, and they have a lot of depth … and Jesse is that, so that’s the foundation,” Thomas says. “And then he was able to build upon it. There were many, many times in [‘El Camino’] that I felt like, oh my God, he so wants to be liked and wants to be good.”

Plemons says he was particularly excited about the “El Camino” script because it showed a side of Todd not previously glimpsed in “Breaking Bad.”

“Todd was kind of the king of the castle for a weekend and you get to see what that’s like,” Plemons says. “He really doesn’t have a care in the world — no one to take orders from or anything. Also getting to see Todd’s apartment was one of the greatest joys of my career.”

Plemons says because he’d already been immersed in the character on the series, returning for “El Camino” was less stressful and more fun.

“The script was so good and we’ve done this before,” Plemons says. “We know for sure we’re not going to do it again now. Right, everyone?”

“Until Vince calls,” Thomas adds with a laugh.