Annabella Sciorra Testifies That Harvey Weinstein Raped Her: ‘My Body Shut Down’ 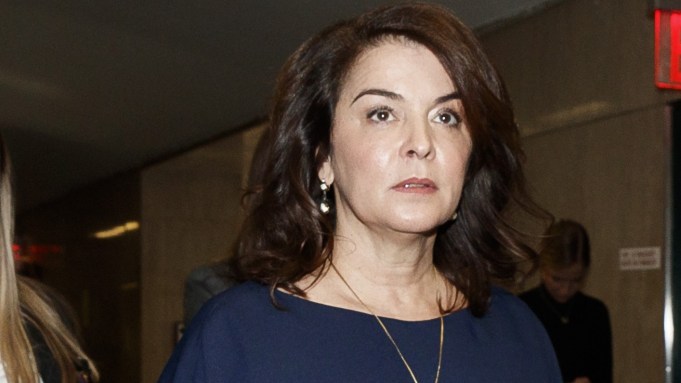 Annabella Sciorra said in court testimony on Thursday that Harvey Weinstein raped her more than two decades ago.

Called as a witness for Weinstein’s rape trial in New York, the actor — at times visibly very upset and crying — recalled the incident shortly after she appeared in Miramax’s “The Night We Never Met,” released in 1993. After a dinner in New York in 1993 or 1994, Weinstein gave her a ride home and dropped her off at her Gramercy Park apartment. Roughly 30 minutes later, he unexpectedly showed up at her apartment door, pushing it open, barging his way through and started to unbutton his shirt.

Weinstein then grabbed Sciorra around her collar above her chest, the actor testified, and he shoved her onto the bed. She said she was wearing a nightgown and did not have underwear on, since prior to his unexpected arrival, she had gotten ready to go to bed in the comfort of her own home. “I was trying to get him off of me, I was punching him, I was kicking him,” she said. “I was just trying to get him away from me…He put my hands over my head to put them back and he got on top of me and he raped me.”

“He put his penis inside my vagina and he raped me,” Sciorra continued, through tears. “I was trying to fight but I couldn’t fight anymore because he had my hands locked. At a certain point he stopped, and he came out of me and he ejaculated on top of me on my leg in the nightgown.”

At that point, according to Sciorra, Weinstein said, “I have perfect timing,” and then “he proceeded to put his mouth on my vagina,” before which he said, “This is for you.”

“I didn’t have very much fight left inside of me at that point. I said ‘no, no’ but there was not much I could do at that point. My body shut down,” Sciorra testified. “And then it was just so disgusting that my body started to shake in a way that was very unusual,” she said, describing it as “like a seizure or something.”

Sciorra said she doesn’t remember a lot of what happened the rest of that night. “I know that I woke up. I’m not sure if I fainted or fell asleep or blacked out, but I woke up on the floor with my nightgown kind of up and I didn’t know if something else had happened.”

Sciorra said she did not call police to report the incident “because he was someone I knew,” she testified. “I would say I felt at the time that rape was something that happened in a back alleyway in a dark place” and committed by a stranger.

On cross-examination, defense attorney Donna Rotunno challenged that version of events, suggesting that Sciorra must have known what rape was at the time.

Rotunno also questioned various decisions Sciorra said that she made that night. She asked why Sciorra had opened the door to Weinstein without knowing who it was, and asked why she hadn’t tried to get to her phone to call 911.

Rotunno highlighted Sciorra’s training as an actor, suggesting that her job is to pretend to be someone she is not.

Sciorra told the jury that a few weeks after the incident, she was in a restaurant where she saw Weinstein. “I confronted him about what happened in my apartment. I tried to talk to him about what happened and I told him how I woke up and then I blacked out and fainted and he said, ‘That’s what all the nice Catholic girls say,’ and then he leaned into me and said, ‘This remains between you and I.’ It was very menacing… and I thought he was going to hit me right there. And it was threatening and I was afraid.”

The actor testified that she wasn’t drunk or under the influence of drugs or pills on the night she alleged Weinstein raped her. She also testified that prior to the alleged attack, when she was working on “The Night We Never Met,” she was physically and emotionally exhausted and overworked, which she says Weinstein was aware of, so at one point, he had sent her a care package with movies, popcorn, licorice, wine and a bottle of Valium. Sciorra says that because of this, she became addicted to Valium, but eventually was able to wean herself off of the pills, and had kicked the habit before the night of the alleged rape. “I realized I was addicted to the Valium. I was taking it during the day a lot and at nighttime and I also knew it wasn’t good for me, so I found homeopathic treatment at the pharmacy so I started to wean myself off,” she said.

Following Weinstein’s alleged rape, according to Sciorra, she began to drink heavily and cut herself. “I cried a lot. I had a lot of what I know is called dissociative experiences. I spent a lot of time alone,” she said. “I didn’t see very many people. I didn’t want to talk about what happened. I disappeared… I began to drink a lot. I began to cut myself a lot.”

In 1997, when Sciorra was at the Cannes Film Festival to promote Miramax’s “Cop Land,” Weinstein showed up unannounced at her hotel room, standing in his underwear with a bottle of baby oil in his hand in the hotel hallway, she testified — at which point she pressed “every single call button” on the hotel phone.

Since then, Sciorra testified, she recalled seeing Weinstein only once more, at an event. “Suddenly I felt a hand on my back, and as I turned around, it was the defendant and he immediately took his hand off and went away,” Sciorra said.

Sciorra said she first met Weinstein in either 1990 or 1991 when her agent took her to a party in Los Angeles at someone’s house. “There was a lot of people there, and at a certain point, my agent introduced me to Harvey Weinstein,” she said. Asked if she was familiar with Weinstein at that point, she said, “No, I had never heard of him.” Sciorra joined Weinstein in a car ride home to Malibu from the party, during which Weinstein handed her his business card and said that if she came across any scripts, she could reach out.

Sciorra said that following their initial meeting, she approached Weinstein about the script for “The Night We Never Met,” a rom-com in which she co-starred with Matthew Broderick. According to Sciorra, the lead roles were written for Broderick and Sarah Jessica Parker and she had no interested in appearing in the movie whatsoever, but Weinstein said he wouldn’t produce the movie if she did not star, and so, he pushed her to start shooting on the heels of two other movies she was in.

That’s around the time that Weinstein sent Sciorra, who was living on Central Park West in upper Manhattan, the package of popcorn, licorice, a bottle of wine, a collection of his recent movies and a bottle of Valium with a note that suggested the package would help her relax.

Later, Weinstein delivered another care package to her. “He sent me a box of chocolate penises,” she testified. “I thought it was disgusting and inappropriate.”

Prosecutor Joan Illuzzi, in her direct examination, asked Sciorra if it’s typical in the entertainment business to take meetings with producers and directors in hotel rooms, to which Sciorra responded: “Yeah, all the time.”

Illuzzi also queried Sciorra about whether she had any romantic relationship with Weinstein ever in her life. “No,” the actor replied. “To this day, have you ever had a romantic interest in Harvey Weinstein?” the prosecutor asked. “No,” Sciorra said.

Previously, Weinstein’s defense team had sought to block Sciorra’s testimony, arguing that her allegations were past the statute of limitations and represented a violation the Constitution’s prohibition on “ex post facto” laws. Prosecutors asked the court to allow Sciorra’s testimony to show that Weinstein is a repeat sex offender and a judge allowed her as a trial witness in a ruling last fall.

At the beginning of her testimony, Sciorra talked about her background growing up in Brooklyn. She said she graduated American Academy of Dramatic Arts high school at 17, and wanted to pursue a career in entertainment professionally — despite her mom’s disapproval. Sciorra is known for her roles in “The Hand That Rocks the Cradle” and “Jungle Fever” and earned an Emmy nomination for her part in HBO’s “The Sopranos.”

In New York, Weinstein is facing five counts of predatory sexual assault, rape, and criminal sexual acts. If convicted, he faces a potential life sentence. He also faces four charges in Los Angeles for allegedly raping one woman and sexually assaulting another in 2013, which carry a sentence of up to 28 years in prison. Weinstein’s criminal trial began Jan. 6 at the state Supreme Court in Manhattan.

Weinstein, who has been suffering health problems, hobbled into the courtroom Thursday without his walker, and was holding onto his PR rep.

Pictured above: Annabella Sciorra arrives to testify as a witness in the sexual assault trial of Harvey Weinstein at New York State Supreme Court in Manhattan on Jan. 23.