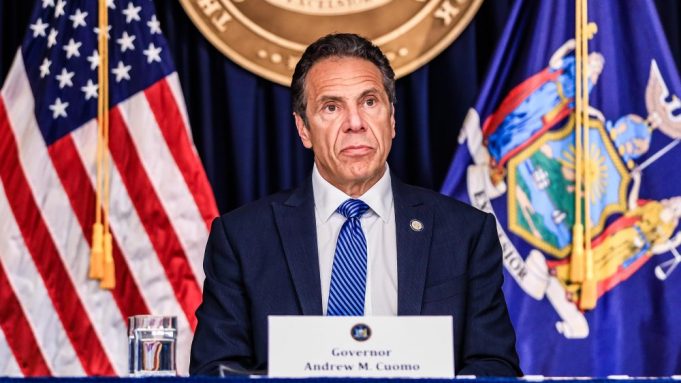 New York City saw numerous large-scale demonstrations on Monday sparked by the death of George Floyd, most of which were peaceful assemblies in Manhattan and Brooklyn. As night fell, however, sporadic looting broke out at the Macy’s department store in Herald Square and other spots including retail outlets along Fifth Avenue and Sixth Avenue.

Cuomo addressed the situation at his regular coronavirus briefing on Tuesday. Cuomo noted that he has the power to “displace” the mayor but said that the problem was not so bad as to warrant such a dramatic step. Cuomo said de Blasio has so far declined his offer to have National Guard troops sent in to help stop looting and property damage.

“The NYPD and the Mayor did not do their job last night,” Cuomo said. “Look at the videos — it was a disgrace.”

Cuomo said de Blasio should have deployed more of the NYPD’s 38,000 officers to keep order in the city. For now, Cuomo is not prepared for overrule him on the use of the National Guard.

“The Mayor has said he can handle it with the NYPD,” Cuomo said. When pressed by reporters, Cuomo said the situation hadn’t deteriorated to the point where he needed to supersede the mayor’s authority. “That would be such a chaotic situation in the midst of an already chaotic situation. I don’t think that makes any sense,” he said.

Cuomo also had harsh words for President Donald Trump and his actions on Monday, which included using military troops and teargas to clear a path for Trump to walk from the White House to St. John’s Church for a photo op with a Bible in his hand.

“I saw the theater yesterday,” Cuomo said. Trump is “Mr. Law & Order. He would bring in the military to put down these protestors.”

Cuomo voiced his support for police reforms such as a nationwide ban on chokeholds and a national standard for what constitutes excessive force.

“What happened to Mr. Floyd was a disgrace — it was repugnant to any good police perspective strategy or approach,” Cuomo said, noting the long history of police brutality against people of color. “Reforms should have been done 40-50 years ago.”

Cuomo faulted Trump for focusing on exerting more more force to deal with a complicated, systemic social and cultural issue.

“The President doesn’t want to distinguish between looters and protesters,” He doesn’t want to speak about the killing of Mr. Floyd. He just wants to talk about looting.”