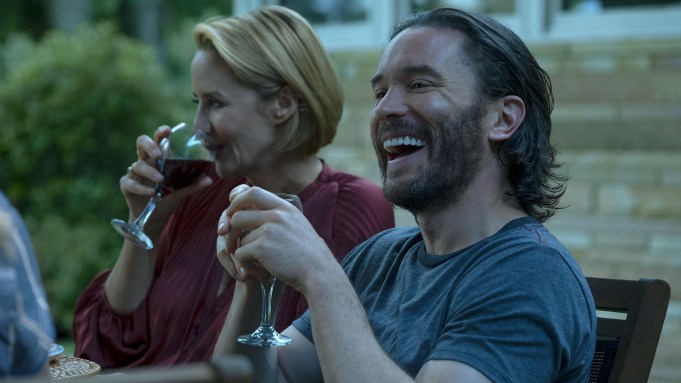 “Ozark’s” look at dark dealings in a happy Midwestern tourist spot has made it buzzworthy TV. Over its first two seasons, it earned directing and acting Emmys. Season three, which launched just as America was getting stay-at-home orders, became popular TV to binge-watch during quarantine.

The series follows the Byrdes, an average American family forced to launder money for a Mexican drug cartel. Wife and mom Wendy Byrde (Laura Linney) proves to be especially adroit at navigating the political waters with Missouri state senators as well as drug lords. Impressed by her own talent, she becomes flush with ambition. Enter the Achilles’ heel: her bipolar brother Ben, played by Tom Pelphrey.

In the newest episode of Netflix’s “Scene Stealers” led by Variety’s Jenelle Riley, casting director Alexa L. Fogel, an Emmy winner in her own right, says she’s had to bring many outstanding actors onto the show. “(Executive producer) Chris Mundy is very, very good at walking me through what the arcs are going to be for the season and what the new characters are,” she says. “On ‘Ozark,’ we kill a lot of people. So we add a lot of new, wonderful themes and new characters.”

In “Scene Stealers,” Fogel and Pelphrey discuss how their long history together led to him landing the role.

“This is a partnership,” says Fogel. “It’s one that goes on sometimes for a very, very long time. There’s lots of reasons why you can do good work in the audition room and not get a role. I think that collaboration between [actors and casting directors] is about the long game, and I think it’s important to understand that.”

Fogel had previously placed Pelphrey in the action series “Banshee,” but their first encounter was in 2006. Pelphrey was new on the scene, a fresh Rutgers University grad. He came in to read for one role, but she decided he’d be better for a different one. After auditioning again, he wasn’t cast in that show, but he’d impressed Fogel.

“My agents called me and said, ‘We just got a call from Alexa Fogel who said you’re an incredible actor,’” Pelphrey remembers. “At 24 years old, that was a major win for me. Not all wins are about booking jobs or getting roles … and that takes you a long way, especially when you’re a young actor.”

Fogel also has a long relationship with Linney. In fact, the award-winning actress credits Fogel with teaching her how to audition. “She used to come into my office and break into hives,” says Fogel. Part of her job, she says, is helping actors manage their nerves.

In the first two seasons of “Ozark,” the Byrdes became used to managing extreme personalities: ruthless cartel lieutenants, small-town lowlifes and the Kansas City mafia. Ben’s arrival created a new threat: a family member who represented love to Wendy and the kids as well as Ruth (Julia Garner), Marty Byrde’s right hand in the casino. It’s Ben’s love for Ruth and his desire to show her that affection physically that leads him to stop taking bipolar treatment medications.

The challenge for Pelphrey was to slowly transform from the fun uncle, supportive brother, and thoughtful boyfriend to an erratic, explosive, unpredictable bundle of out-of-control emotions. The full expression of Ben’s mental health struggle plays out over three episodes, but in one, in particular, Pelphrey embodies the extremes of bipolar disorder.

At the beginning of episode eight, “BFF,” Ben is tender and gentle, helping girlfriend Ruth recover from a near-fatal beating. The intense stress has triggered his mania, and his decisions become reactive and reckless. Pelphrey manifests Ben’s rapidly changing emotions physically: Initially, he’s agitated, shaking, there’s an edge to his voice. When Ben is unable to confront Ruth’s attacker, he goes to a bar — a surly customer looking for a fight. He finds one, going feral, relentlessly beating a man over his choice of tie.

When he unloads his rage onto the Byrdes at their black-tie event, the tenor of his voice changes into something primal; the viewer can feel the spray of his spittle spewing as he speaks. Placed into a state psychiatric ward, Ben transforms again. Now he’s fragile, sobbing uncontrollably, curled up in self-protection, his voice weak and pleading. Then, upon release, Ben charges at cartel attorney Helen Pierce and unleashes the extent of human frustration, anguish and righteousness into a two-minute, terrifying yet vulnerable roar.

Pelphrey researched the condition extensively, using the book “An Unquiet Mind,” written by an authority on bipolar disorder who also suffers from it. That gave him some guidance on where to take his performance, but ultimately he just had to rely on his instincts. “There was a lot of it that was so out on a limb,” he says. “And I knew that if I was in any way watching myself or judging myself or self-conscious, that it was going to fail.”

Emotions are the colors of any actor’s palette. But Fogel says Pelphrey was able to focus and harness even the most extreme emotions. It’s not easy, she says, “[to] contain it, and be believable and be naturalistic, which is what ‘Ozark’ needs, [and] which Tom did so beautifully.”