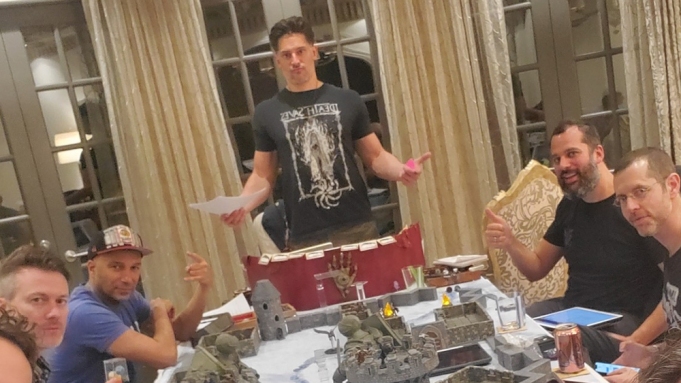 On a regular basis, Vince Vaughn, Rage Against the Machine guitarist Tom Morello, wrestler Paul “The Big Show” Wight, “Game of Thrones” co-creator D.B. Weiss and more gather in Joe Manganiello’s basement for hours. But they’re not playing a poker game, holding a business meeting or some other engagement that might be expected to bring those sorts of names together.

They’re playing Dungeons & Dragons, the tabletop roleplaying game first created in the ’70s that’s maintained a passionate fanbase for decades. In the above video, Manganiello gives Variety an exclusive look into his current D&D campaign (dubbed “The War of Dragons”), how it came together, and how it gives him and his players a creative and social outlet — and something to look forward to and plan for all week long.

Manganiello, whose bonafides include a clothing line inspired by the game, a decked-out dungeon in his house for playing and a professional role as a consultant for D&D publisher Wizards of the Coast, started his current campaign about two years ago after learning 5th Edition, the most recent version of the game. He serves the important role as DM — D&D shorthand for Dungeon Master, the person who creates the world, controls the characters not played by the participants and generally serves as organizer.

The initial group, which has since grown much larger, included Joe’s brother Nick, writer John Cassel (with whom Joe co-wrote a Dragonlance script back when a movie based on D&D was at Warner Bros.), “Fanboys” director Kyle Newman, “League of Legends” story designer Ryan Verniere and Crossfit Masters champion Ron Mathews. Wight, actor George Finn and Morello joined thereafter, with Morello bringing in a particularly impressive recruit.

With that, Weiss joined, and the group continued to grow. Morello also brought in Vaughn, a friend of his from Chicago who, like much of the group, had played D&D when he was younger, but hadn’t picked up a set of game dice in years.

“In an interview, [Morello] had talked about playing Dungeons & Dragons and that this group, this mysterious group, that plays in Hollywood had reached out to him to go play,” Vaughn explains. “And at first, I said, ‘That kind of seems a little crazy. Are you actually going to go do it?’ And then Tom did, and he came back and said he had a blast and it was a lot of fun. We were hanging out, and he was kind of luring me in. I didn’t really realize it, but he was kind of giving me books and talking to me, like, ‘I think you should check this out.'”

In addition to those who regularly meet up to play, the War of Dragons has had a number of recurring guests. Those include “Game of Thrones” co-creator David Benioff, who was texting Weiss during one of their sessions, asking how many hit points the dragon they were fighting had — so naturally, Manganiello let him play for a while. “Guardians of the Galaxy” director James Gunn and “Saturday Night Live” cast member Taran Killam have also played in Manganiello’s dungeon previously.

As word of the campaign got around — even inspiring a name-drop in Season 2 of Netflix’s “You” — it also attracted a number of art pieces. Comic book artist Juan Cabrera drew the characters, as did Public Enemy’s Chuck D, and a person who goes by Mephit Man regularly paints custom miniatures for the players.

(Click here for a larger version of the above.)

(Click here for a larger version of the above.)

The group has managed to continue their campaign amid the coronavirus pandemic, utilizing standard video chat apps like Zoom, in addition to Roll20, which is made for playing tabletop and roleplaying games remotely. But typically, they gather in Manganiello’s infamous dungeon, officially titled “The Gary Gygax Memorial Dungeon” in honor of the founder of D&D.

“You would not believe Joe’s dungeon,” Morello says. “There’s nothing that could occur in the game that someone could come up with in the spur of the moment that isn’t in some box. Like, the druid turned themselves into a weasel, and Joe says, ‘What color weasel?’ And then the red-striped weasel [miniature] comes out. It’s pretty amazing.”

For the group, though, it’s become more than a game. It’s a consistent way to bond and spend time together, with sessions often going into the late hours of the night.

Verniere remembers seeing his grandparents and their friends playing pinochle as a child, and admiring the bonds he saw between the adults. For him, D&D now serves that same kind of social purpose.

“I remember it was just a magical thing to see these husbands and wives playing this game, the revelry, the bond,” he says. “As a kid, I knew I wanted something like that in my life, that sense of community. And this game — in a town that can be a little bit fake at times, let’s just be fair — this game has cut through so much of that social noise.”

The campaign, Manganiello marvels, has entered the zeitgeist, but it’s still something very personal to its players. It’s a source of social and mental stimulation, even when the sessions end.

“I don’t fit in anywhere,” Wight says. “I go to the movies, three people behind me can’t see. I don’t have a social life outside of work, because I’ve worked five nights a week for 25 years all over the world … [During the week], you think about this game, the adventure — ‘How many spell slots do I have? Where are my hit points? Where are we going to be? What if this happens? What if Joe comes up with this? Oh man, I really hope he doesn’t come up with that.’ It’s really good for the brain all week long.”

“It’s similar to what a high-stakes poker game might be,” Morello says. “It’s a game where friends gather that’s taken deadly seriously and is a lot of fun. But it’s serious. It’s very serious! We’re on an adventure that I think about a lot during the week.”

Feeling inspired? Here are some resources to get started, even while self-isolating. And for a chance to play D&D with Manganiello and tour the Wizards of the Coast headquarters, all for a good cause by Omaze, click here.

The materials and rules: