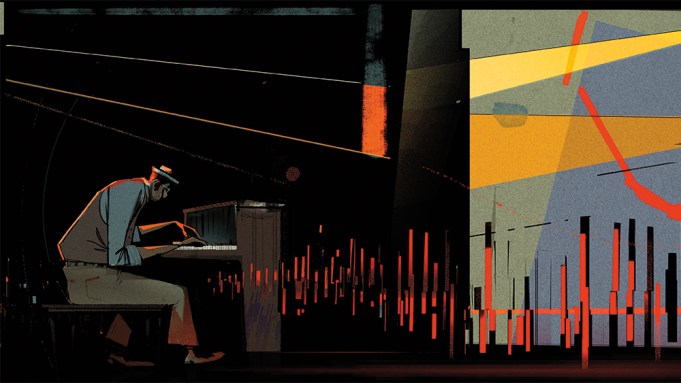 From celestial jazz to notions of great spirituality, the creative team behind Pixar’s “Soul” had the challenge of bringing abstract ideas about the unknown to life through animation.

The film, which debuts on Disney Plus on Christmas Day, focuses on Joe (voiced by Jamie Foxx), a middle school teacher who dreams of being a jazz pianist. On his way home, he falls into a manhole and finds himself in an unearthly dimension — someplace between life and death.

To capture the film’s spirit, composer Jon Batiste considered the universe and the grand perspective of life. “All of that is so much that we can’t even put it into words,” Batiste says, “but when Joe gets into the zone, the music speaks to that — the feeling of being connected to something bigger than us.”

To achieve that celestial feeling, Batiste, who serves as musical director for “The Late Show With Stephen Colbert,” says he used a prepared piano, where “you adjust the strings … to change the sound.”

He also looked at the score as an entryway into the world of jazz for the film’s young audience. “Think about a kid who has never heard jazz music before,” he says. And although Joe is voiced by Foxx, Batiste also played a visual part in the presentation of the character: The composer’s hand and finger movements were filmed as he played the piano, serving as a guide for the animators as they brought Joe’s performance to life.

Production designer Steve Pilcher welcomed his job contrasting the film’s two realms: the real world and the Great Before. “I love things that are profound,” he says.

Since there’s no image of what a soul looks like, director Pete Docter had sketched some early art. Not wanting the souls to look ghostlike, Pilcher and the creative team used colored lines around the edges to help define and articulate the characters’ emotions. Pilcher’s color palette used the vibrant colors of New York City in the fall, as well as the deep purples and maroons of the jazz club at night. Pilcher added Christmas lights above the portraits of the jazz greats that hung on the walls of the club to evoke associations of holidays or festive dinners.

The Great Before, in contrast, was, “un-Earth-like. It was very translucent and opaque,” Pilcher says. “Everything had a softness to it, and yet, it was desaturated.” Still, there is a lot of detail in the soul world, Pilcher says, particularly when it comes to the Counselors (voiced by Alice Braga and Richard Ayoade). They needed to be different from souls since they are the orchestrators making sure there is an order in the Great Before.

Animation sculptors built models made of 3D wires to help the animation team assess how the Counselors would take shape. “We shone an iPhone light on [a model] and looked at the shadows. The shadows were really interesting if you moved [the phone] back and forth,” Pilcher says.

Still other shapes and structures were devised for the peaceful afterlife setting, which was colored with a pastel palette. In the Hall of Everything, where the souls go to interact with the things that interest them, “we bleached the color [of those objects], and what you see there is [an] opaqueness,” the designer says. The objects light up when the souls touch them. “There was no color unless you interacted with it,” he explains.

Ultimately, for Pilcher, restraint was the key to designing the Great Before. “The world is a simple one,” he says, “with big and bold shapes that look like nothing you’ve ever seen before.”