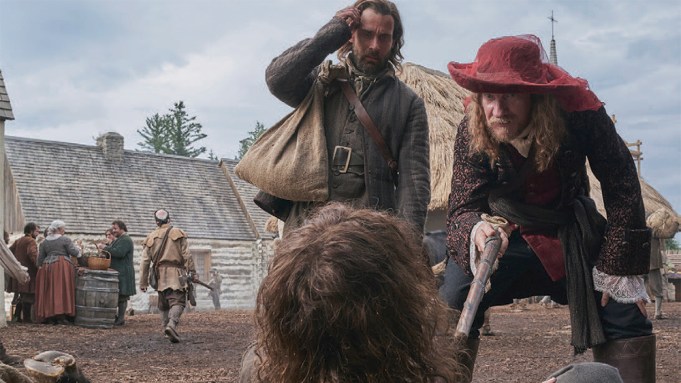 When costumer Anna Terrazas was tasked with creating the look for National Geographic’s new series “Barkskins,” she set out to put her own stamp on the period drama.

The eight-episode series, based on the novel by Annie Proulx and shot in the woods of Quebec, examines 1690s New France and the mysterious massacre of settlers that occurred there. The series begins with the arrival of fictional characters René Sel (played by Christian Cooke) and Charles Duquet (James Bloor), both of whom are signed in servitude to Claude Trepagny (David Thewlis), a wealthy landowner who has only the grandest of visions for New France.

Rich landowners and First Nation settlers have been represented countless times on-screen, but Terrazas didn’t aim to copy those. She began by reading books and doing research online. “I wanted to be as period-accurate as possible,” she says, not only for authenticity but out of respect to today’s First Nation citizens.

But the books weren’t showing Terrazas what she needed, she says. Instead, her greatest influence came from London-based costume historian Kass McGann, who helped point the film’s research team in the right direction.

McGann was particularly valuable in clarifying questions on the use of the mantua, a flowing, loose-fitting robe. “We had believed it was worn by only wealthy women, but we discovered through Kass that by the 1690s it had become a functional piece of clothing for women of all classes.”

Armed with that information, Terrazas scoured the world’s rental houses for mantuas. With fewer than 20 authentic ones available, she set forth to make her own “just about a month before shooting.”

Other inspiration came from artwork, which helped her gain a fresh edge for the costumes. “This was a period where painters influenced light and color, so I tried finding the colors that each character would wear, and that’s how I began,” she notes. “We found a painting with a man wearing a velvet suit in red; he was this refined person armored by his clothes.”

Trepagny illustrates this conceit. When we first meet him, he’s in a deep purple textured coat with hat and veil. “We looked for eccentric rock ’n’ roll fabric. It’s Jimi Hendrix meets 17th-century man,” says Terrazas. “You need to know where and how to use [that kind of strong color]. That’s why we added it into his veil as part of the hat.”

Hamish Goames (Aneurin Barnard), who’s investigating the massacre along the river, is a mysterious character we meet in the opening episode. Terrazas dressed him in black with a white shirt. Because he’s traveling around a lot, his clothing repeats more frequently than that of other characters.

The key to dressing Goames in black was texture, Terrazas says, especially when he’s featured in interiors or scenes lit by candlelight. “I had to find fabrics that didn’t make the black too flat,” she explains.

Marcia Gay Harden plays Mathilde Geffard, an innkeeper. She has her own voice and knows a lot about the town’s secrets. Unlike the other women in the community, she’s willing to stand up to her husband. The women all wear petticoats and layers, but what makes them distinct is color, the costumer says. When we first meet Mathilde, she’s dressed in a purple-and-white outfit. “We saturated Mathilde’s colors,” Terrazas says, “because there’s a masculinity to her character.”