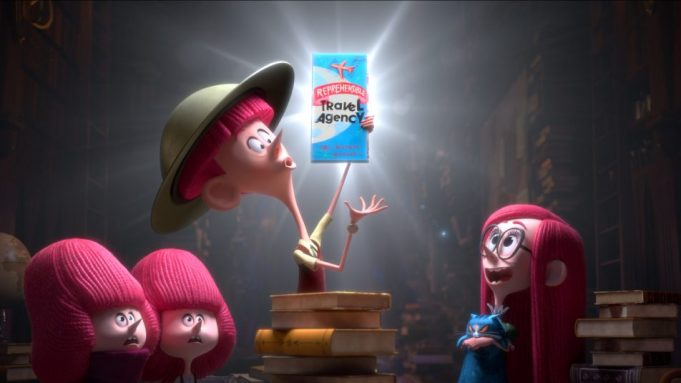 “The Willoughbys” hits Netflix this Wednesday, the latest in the streaming platform’s slate of animated, family-friendly features.

Based on the Lois Lowry books, the film follows the four Willoughby children, who live in a house where their self-centered parents neglect them, depriving them of love. The children devise a plan to send their parents on a long vacation and, in the process, end up finding out the true meaning of family when they meet Nanny, voiced by Maya Rudolph.

“Cloudy With a Chance of Meatballs” director Kris Pearn had read the books and responded to the “idea of subverting children’s literature on its head,” he says. “It was obvious [Lowry] was making fun of Roald Dahl.”

Pearn’s idea in adapting the books was to play with the tropes of animated family films.

“What if we did ‘Grey Gardens’ meets ‘Arrested Development’ for kids?” he says.

He knew he didn’t want to do Tim Burton-style animation. “I love the optimism in the face of failure, and that’s one of the underpinnings of the film,” he says, adding that he wanted the audience to know they had permission to laugh.

After Netflix got on board, Pearn started to storyboard the film with writers and artists from around the world. “I had people in France,” he explains. “I had eight-nine writers and artists who were new to the field and veterans.” And having a diverse field of talent meant he had a team that could offer different points of view and help him keep things objective.

When it came to casting the Willoughby family, Will Forte (“Booksmart”) as Tim was an easy choice. “We needed someone who could be on the knuckle with their intentions and yet someone who had a sweetness to them. If you saw ‘The Last Man on Earth’ he was simply perfect,” Pearn says. He adds, “John Cleese was a huge influence on the development of Tim.”

For Rudolph, who came on to play Nanny, Pearn says initially the character was conceived in a broader sense, providing the comedic element. But since Rudolph brought such a calming aspect to her character, Pearn says, “we pivoted the character to being the empathetic core of the film instead.”

Despite having a stop-motion feel, the film is fully computer-animated, for which Pearn credits evolution in animation software. “We benefited from XGen animation software that gives the fuzz to the felt patterns and the softness to the cotton candy moments.”

His goal was to ground the look of the film in a style that harkened back to pose-to-pose animation days.

For the music, composed by Mark Mothersbaugh, Pearn’s instruction was simple: “I wanted the music to be happy, not somber.”

Inside the house, the music had a chamber music stance to it, but once the kids are out of the house and exploring, the music world swells.

Pearn worked with music supervisor Justine von Winterfeldt for the source music. His goal was to have von Winterfeldt find music that had a contemporary feeling, but was hard to place. “So, when the kids walk out to the city, the sound you hear could be an ‘80s cop show, or it could be now. It was this contemporary urban feeling,” Pearn says.

And while it was no easy task finding the right music, when they did, it helped the puzzle of putting the animation together. “It was really special,” Pearn says.