Watch: How the ‘The Great’ Design Team Set the Scene for the Perfect Coup 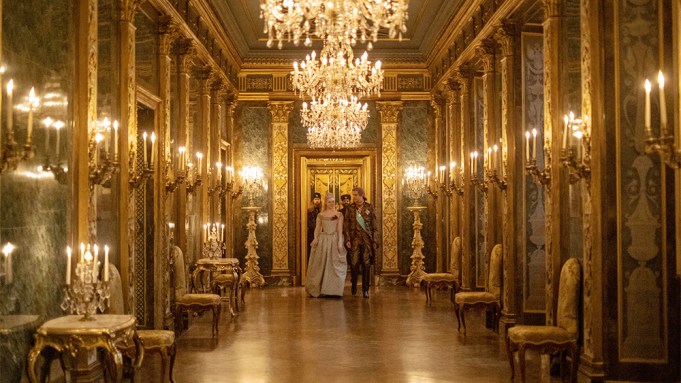 When it came to designing the court of Peter III in Hulu’s “The Great,” which premieres May 15, production designer Francesca di Mottola carefully avoided the style of the Versailles-like Russian Winter Palace. “We wanted to invent our world for the show,” she says.

Created by Tony McNamara, “The Favourite” screenwriter, the show focuses on the rise of Catherine the Great (played by Elle Fanning) as she meets Peter (Nicholas Hoult) to become the longest-reigning female sovereign in Russian history. Staying true to McNamara’s style, the story mixes satire and comedy with drama.

For di Mottola, the set design originated in close collaboration with the art department. Initial ideas and mood boards that she had created were turned into technical drawings that were then constructed as sets at 3 Mills Studio in the U.K. While most of the interior sets were built on soundstages, Hever Castle and Hatfield House in England and La Reggia di Caserta in Naples were also used for exterior shots.

The largest set was the grand hallway, which di Mottola describes as “the heart” of the show. “It gives us that glimpse into palace life as people walk and talk through it,” she says, adding that it “is such an intricate set and it actually took us 3 months to build” It’s an area in which Peter is seen roaming a lot and always stumbling in on conversations. For the floor, more than 200 sheets of the tiled design were printed and then laid in diamond shapes. The ceiling, painted in gold, used up “all the gold paint supplies in the U.K,” di Mottola says. “We had to wait for suppliers to make more.” In total, 20,000 sheets of gold leaf were used by the painting department. “And they had over 300 chairs gilded,” she notes.

Much of the show’s action takes place within Catherine’s and Peter’s private quarters, and the key to designing them was to understand the characters and their journeys. “From there, I could create the right environment for each,” di Mottola says. “The costumes would reflect taste and personality, and so would the spaces.”

Being one of the largest areas in the palace, the apartments occupied by Peter were built on an entire soundstage. “Peter treated the palace like a fraternity house,” explains di Mottola. “It’s where he drinks, fools around with other women, eats and dances. It’s a mess.” Look closely and you’ll see unmade beds, broken chairs and shot glasses tossed aside in wanton abandonment. It ultimately reveals his inability to rule.

In contrast, there’s a far more intellectual aesthetic to Catherine, and her living quarters are much more diligently kept up. We see her reading books about the Enlightenment, which required calligraphy artist Rosalind Wyatt to create the essays and quotes that are seen around the character’s room.

When she starts planning her coup, the items in her room show her building her plans. “For the coup board, we sourced real maps and prints of Russian documents,” di Mottola says. “We start seeing maps as she strategizes her takeover.”