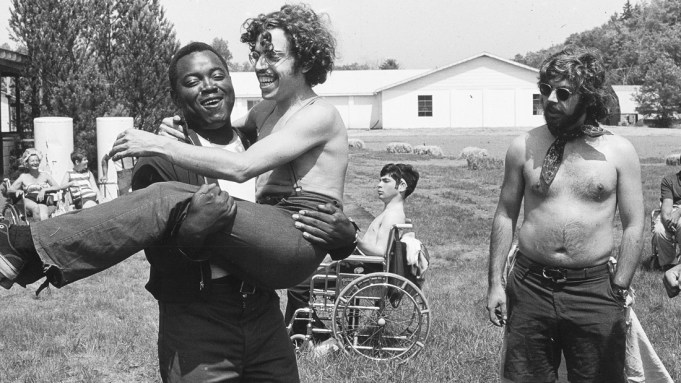 The new Netflix documentary “Crip Camp” centers on Camp Jened, a summer camp for those with disabilities. As told in the doc, it would go on to spark something of a revolution in the disability rights movement.

Filmmakers Nicole Newnham and Jim LeBrecht (who had worked with Newnham as a sound designer on her projects) teamed up to co-direct. LeBrecht had been to Camp Jened, and he was looking to tell a story about his experience there.

“I talked to Nicole about a different project around disability and wasn’t seeing things that told the complete story and it stuck with her,” he says. He sent Newnham a link to a Facebook page that people who had been to Camp Jened had been contributing to for years, and it had an impact.

Newnham had to sit down as she scrolled through the page. “The whole thing completely shifted how I viewed disability,” she explains.

The team’s next step was making the story accessible and finding the right story arc. “We didn’t know when we started if we were going to be able to follow the arc of the story in a way that would feel as if were one film,” Newnham says.

Archival footage was not easy to obtain, as so much had been lost over time. Luckily, the talking heads and subjects helped fill in the gaps. Newnham praises the editors for piecing together the footage that did exist, along with finding photos to “create that immersive experience.”

The message, ultimately, was that this wasn’t just a story about a camp; it was also the foundation of their activism. Its code of treating everyone like people empowered them to go into the world and make a change. “The film talks about what we struggle for and fight for,” LeBrecht says.

This marked the first time LeBrecht got to work as a director. The process of going into the editing room and see the documentary come together was a powerful one, he says, seeing the full picture of the story he and many others had been fighting to tell for years.

“I saw some scenes during the editing process and thought, ‘This was my experience and maybe it would change how people have misunderstood us and how they label us,'” he says.

For Newnham, the process was an eye-opener. “As an able-bodied director, I could see where Jim couldn’t travel and where he couldn’t access,” she says. “We used the filmmaking process as an advocacy platform to blaze trails for filmmakers with disability in an industry that has a long way to go.”