Continue to Variety SKIP AD
You will be redirected back to your article in seconds
May 5, 2020 8:28am PT 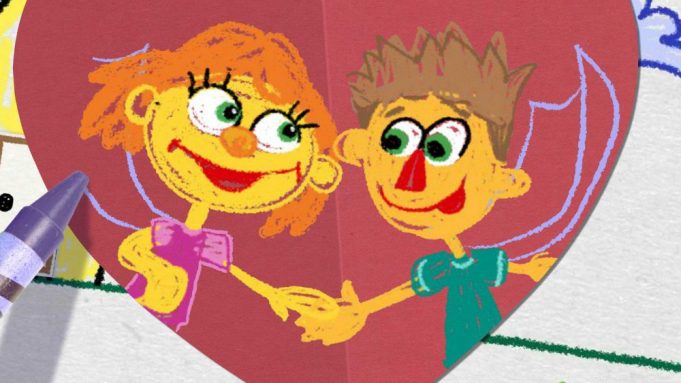 So when “Sesame Street” producers came knocking on the doors of Exceptional Minds in Burbank to animate a new special, the studio’s animation director Howie Hoffman knew the duo were the perfect pair to collaborate on the project.

The studio was the ideal choice for “Sesame Street’s” special since the special would focus on Julia (“Sesame Street’s first autistic character) and her brother Samuel. Who better to animate Julia than Exceptional Minds, the academy that works with students who are on the autism spectrum?

With “Sesame Street: Story Time with Julia and Samuel: Super Fluffster,” Julia and Samuel put their imagination into action centering on her much-loved bunny, Fluffster. In the story, Julia imagines Fluffster becoming a superhero who swoops in and saves the day for their neighbors and some aliens.

Carbonell worked on background, while Lenard designed the characters. For Lenard, animating is ideal because “you’re not restricted by reality or the filming. You can make anything happen.”

Even though they had a script, visually the world was their oyster. One of the first scenes they tackled was stylizing the boy and girl who Julia and Samuel imagine. In the scene, the girl’s ball is stuck in a tree and a boy is high on a swing waiting to be pushed.

“Initially, the boy was going to play hopscotch, but then I came up with the swing idea, because in hopscotch you don’t need another person,” Lenard said.

On closer examination, Lenard’s noticed the boy is an amalgamation of his art.

“I put a bunch of characters together. He has Bert’s head, the Count’s nose and just this spike hair,” laughs Lenard.

The girl was inspired by the existing character Betty Lou.

When it came to animating otherworldly creatures, Carbonell recalls seeing the script that simply stated, “Fluffster saves two aliens.” With the vague description, the artists were given creative license to run wild. But being a fan of the series, he recalled the Martians in the TV show as inspiration.

The animation process for the video — which runs under three minutes — took five months from concept to delivery.

“Jacob and Dylan designed it and storyboarded it in collaboration with the client,” Hoffman said. He also recruited friends who were also on the autism spectrum to create the music that accompanied the special.

To differentiate between Julia’s imagination and reality, they had to change the style. The background stayed in crayon, but the characters were animated in the fantasy world.

Carbonell came up with the layout and composition for the whole idea put in a few gags, such as the rocket ship. In his initial storyboarding, he had the rocket appear being drawn on, but the heads at Sesame Street wanted him to change it because they didn’t want the rocket being drawn.

“There were things we had to adjust and that was one of the gags,” he said. “We ended up compromising where it comes out of a secret door instead.”