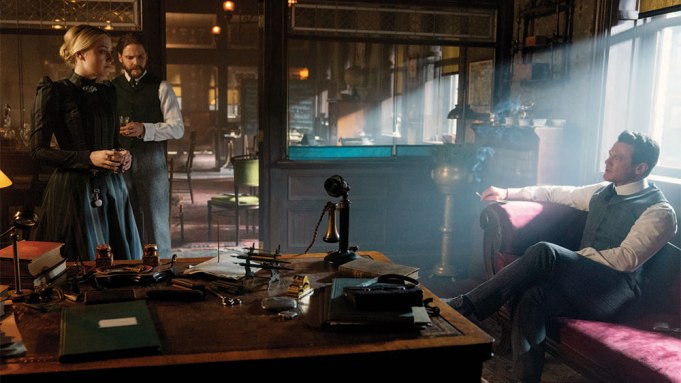 Ruth Ammon doesn’t normally come in on the second season of shows as a production designer, but for “The Alienist: Angel of Darkness,” set in 1897 New York, she was willing to make an exception.

Ammon picked up where Mara LePere-Schloop left off in Season 1, having turned areas in Budapest into New York’s Gilded Age for the show’s murder mystery, in which Sara (Dakota Fanning) reunites with Dr. Laszlo Kreizler (Daniel Brühl) to investigate the kidnapping of a baby.

Ammon expanded on the period-appropriate sets built by LePere-Schloop (who picked up for Ammon in the second season of “Tom Clancy’s Jack Ryan”), using locations like the Metropolitan Ervin Szabó Library for Delmonico’s steakhouse and building a meat market to visually enhance the show’s macabre and mysterious world. Here, she highlights key locations for the TNT series, which premieres July 19.

The Direction of Season 2

“Mara did a beautiful job building that backlot, and I felt there was room for me to come in there. The backlot had aged a year, so it had wear and tear and had a nice feel to it. But it required more moving around than building from a blank slate. We made changes to what existed through layering, building up architecture and changing types of carriages. We created the Bowery from last season and added 100% more to create the Ganesvoort meat market, which is our dark underbelly world. We added in the train station and designed it to the story.”

“We made Sara’s office quite dark to separate it from the world outside. When I first moved to New York as a young woman, I was on 87th Street, and this place had that exact glass hallway that allowed light to enter the dark building. I felt the diffused glass would add to the layer of mystery.

We wanted her office to be very smart and well-tailored. She has wealthy clients, so we made the street have a middle-class feel to it among other office buildings so [clients] could feel safe. There’s a space for tea in the front room.

We had a separate entrance for Sara to come in and out, and clients couldn’t see Sara’s private area and her desk. It’s something you didn’t see at that time in history — a woman having her own office.”

“I love the Absynthe Bar. It’s one of my favorite sets because my grandfather was a bar owner. I love that it was for Cyrus [Robert Wisdom]. We wanted him to have a nice place. That [one] had elements of beautiful things in it, like some of the fabrics we use — velvets and worn silks. We found a quilt that reminded me of an African American quilt from Southern Colonial times. We hung that over by the bar and piano.”

“At that point, Sing Sing was this revolutionary new institution [for holding] prisoners, but it’s still dreadful. I found the perfect location on the outskirts of Budapest, which worked for the exteriors and the suffragette protests.

There was a lot of prep work with 3D models, concept sketches and virtual-
reality models. I spent time in close collaboration with cinematographer Cathal Watters. He asked if we could cut half the light out of the windows and add an extra window. That change he made in lowering the horizon line of the light was so impactful.”