‘Blue Story’ Behind the Scenes: How Director Andrew Onwubolu Used Rap to Evoke the Grit of London Street Gangs 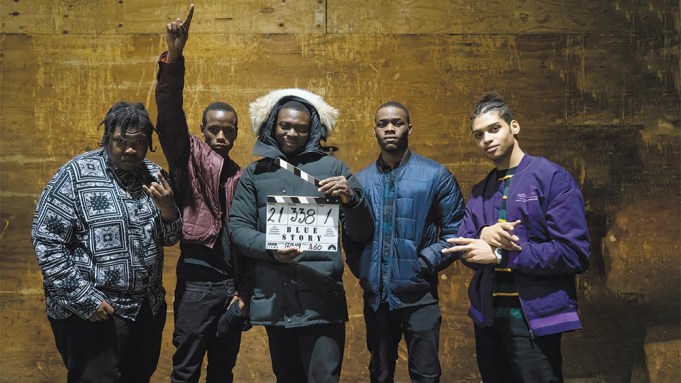 The movie “Blue Story” tells the story of warring gangs in Southeast London through a unique lens — that of Andrew Onwubolu, aka Rapman, who makes the transition from rapper to director with his feature debut.

Onwubolu has been on the U.K rap scene since 2013 and has worked with the likes of Margs and J. Hus. In 2018, he uploaded a three-part trilogy to YouTube, “Shiro’s Story,” based on his own life and growing up in the inner city areas of London. The series racked up over 20 million streams and even caught the attention of Jay-Z, who later signed Onwubolu to Roc Nation.

His rise to stardom was a fast one, but long before he made “Shiro’s Story,” he had written “Blue Story,” and this was just as determined to tell more inspired by his own experiences.

Onwubolu’s narrative blends dialogue and music, using the artist’s raps as a Greek chorus to drive the story. And he frequently appears to provide commentary on the action on-screen.

Onwubolu talked to Variety about why he felt confident to release “Blue Story” after sitting on it for years.

Deptford and Peckham are areas of East London where street wars happen. These are neighborhoods the public typically doesn’t see.

I wanted to show the London that I know. I saw a London that was corner stores and housing estates or tower blocks (England’s equivalent to low-income housing project). I wanted the film to be as close to reality as I could get it. The glamorous side of London was one I didn’t know and so it wouldn’t be a truthful and authentic portrayal.

Music plays such an integral part in driving the story forward. For the opening, you set the scene with lyrics about violent crime —  “Shoot-outs and stabbings on, like, every junction.” How did you arrive at that opening?

After we made the movie, we did the rap. I thought it was going to be the first thing people hear. I thought, “Welcome to London” and that describes London how we see it, “Welcome to London a.k.a the dungeon…” that’s the London I know. It would set the scene for the city that you would see throughout the film. That rap is my favorite one in the whole film.

And you wrote the raps after the film was shot?

There were no raps written before the script. Some notes said, “Rapman raps here.” We had the film made and there were two raps that I had to do beforehand. There was one with Marco and that scene with his older brother and the other one where a character is killed. I had to write those a month before the film was made.

Afterward, I was watching the film and thinking where to add more raps to the story that would help to push it forward.  I aimed this at a younger audience,  wanted every rap to say, this is what can happen. We had a lot more in there than what we originally planned.

What was the journey of the story and getting it to the big screen?

It was originally a 3-part YouTube short that I had made in 2014 and a lot of the comments were saying to make it into a movie. I wanted people to write the script and people said it would cost over $30,000. So I wrote the story in Microsoft Word and it was a nightmare. Someone suggested I get Final Draft and it was amazing. It took six months to write and there was no pressure on me because no one was expecting it.

When I had completed it, I didn’t let anyone read it for two years. I was scared someone would say it was rubbish.

I met the producers in October,  we made it last March and the film was released in the UK last November. Everyone said it was the fastest track for getting a movie made.

Paramount UK had not made any original movies, until this, they’d been distributing films from the USA. This was the first film Paramount UK made and they had so much riding on it. When the film did so well, everyone was really happy about that.

What would you tell an aspiring artist today?