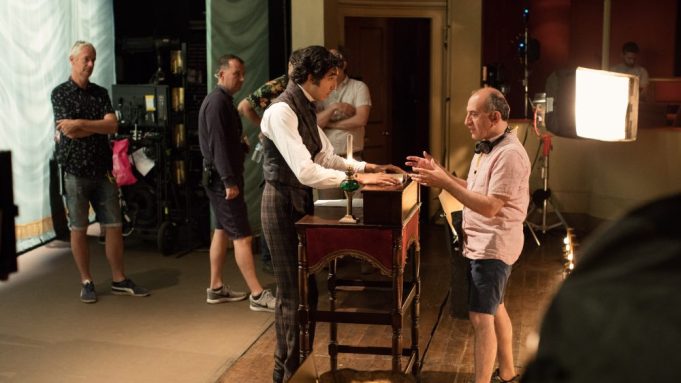 When Armando Iannucci helmed “The Personal History of David Copperfield,” (opening on 1,000 screens around the country Aug. 28) the one instruction he gave his craftspeople was to go bright.

For those familiar with the book and any of the previous iterations, Iannucci’s version is far from bleak and dark — instead, it’s a comedy with Dev Patel in the starring role.

While Iannucci keeps the Dickensian themes of loss, poverty and the powerful abusing the weak, he injects humor and focuses on the story as one of “great celebration about neighborliness, community, imagination and optimism.”

Below, Iannucci and his craftspeople tell Variety how they infused vibrancy into this much-loved classic and turned it into a family film.

“We wanted to present a vision that was not one that isn’t what you initially think of when you think of Dickensian London. It’s funny and it’s rich and Armando wanted to bring out the humor of the characters.

I looked at Georgian interiors which were bright and colorful and almost psychedelic in a way. The Victoria & Albert Museum had an archive of interior catalogs with little samples of what people were ordering for their homes, and the colors were crazy. So, the patterns and colors were based on reality.

We had sets all over the country. We decided it was better to travel around than do a studio-based film. We were based in Hull (in the middle of England) because it had little cobbled streets that could work for London. After all, we were never going to get to London.

We took advantage of the beaches that were close by for the Pebble Beach scene at the beginning, and we also made use of the historic dockyard.

My favorite set was the bottling factory just because, emotionally we needed it to look sinister so David could feel that soul-searching moment, and feel like the darkest moment of his life after he’s kicked out of the house. It stretched our budget, but it was fun to work on.”

Susie Harman: “Armando gave us confidence with this because nothing was too bright for him, so we could push this because he wasn’t scared of color. He wanted it fresh and not antique looking.

For Betsey Trotwood (Tilda Swinton), we started in emerald green for her and we moved into the “Tilda ginger,” we call it that because we didn’t want her to feel cold because she’s an incredibly warm character. She was probably called ‘cold’ by a man. But she was almost like an early suffragette – a strong woman.

It was important to show that warmth through the cinnamon and gingers and those colors worked so well against her skin tone. We added in blue by the end to give her a fresh tone.

“When it came to dressing David Copperfield, all his coats and trousers were wool. Before he had money, all his waistcoats were wool. When he had money, he was influenced by Steerforth’s waistcoats, and he’s very influenced by him. So, we went a bit over the top with him with jagged patterns, and by the end of the film, he goes back to something sober when he’s trying to make a mark and impress Dora. The ties and waistcoats could show what we were trying to do, and where David was.

He (Dev) just had that personality to make them work. The way we approached it was, would this character go out and buy this? If the answer was yes, then you know you’ve cracked it.”

Director Armando Iannucci on the visual style of the film

“I don’t expect people to pass the exam before they can get into watching it.  I don’t care if you haven’t read the book, or if you haven’t heard about the book. I don’t care if you don’t know anything about Dickens. It’s not about that. It’s about being inspired by the magic of the book. I didn’t want it to feel like we were in the past and caked in cobwebs and dust.

Dickens writes cinematically and visually, and a lot of his comedy is described almost like a slapstick. I felt instinctively that this would translate into the language of film.

I could only think of Dev to play David. He’s in every scene and he has that awkward, vulnerable, funny, comedic and romantic character. He was the one actor who for me best inhabits the spirit of the role, and that’s how we should cast everyone.

With the opening, we wanted to open on what looks like conventional storytelling. There’s a packed theater – and that’s based on Dickens himself because he would spend a lot of his career doing readings. But within 30 seconds, we make this jump and you see the backdrop is the backdrop of a building in England, and David walks towards it, and we cut to this field.

I wanted to tell the audience that this was going to be unconventional, right from the beginning. And if your expectations are of a certain style of period drama, we’re going to allow you a bit of that, but then we’re also going to shake that up and give you unexpected camera angles.

Visually, I wanted to get away from fog and cobwebs. We’re in the middle of the Industrial Revolution. It should be feeling bright and modern. It should feel bright, exciting and cosmopolitan. When David goes to London, it should feel like Manhattan.”