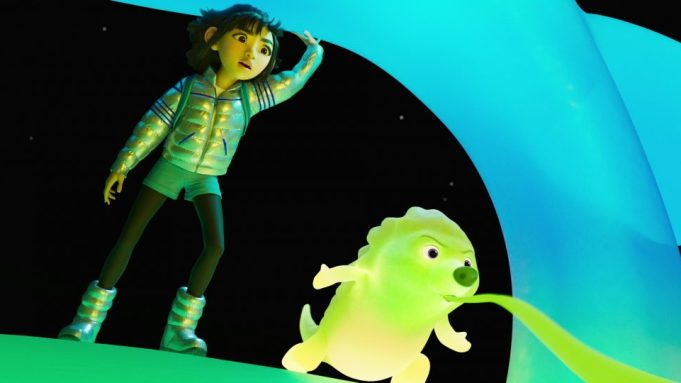 Netflix released the final trailer for its animated musical “Over the Moon,” coming to the streaming platform on Oct. 23.

The film celebrates Chinese mythology as it follows a girl named Fei Fei (Cathy Ang), whose mother used to tell her tales of the Moon goddess, Chang’e ( voiced by“Hamilton’s” Phillipa Soo). As Fei Fei is faced with changes in her life and her father is thinking of remarrying, Fei Fei decides to builds a rocket to the moon in her quest to meet Chang’e. Her determination fueled by the adults who tell her Chang’e isn’t real. Ken Jeong, John Cho, Margaret Cho and Sandra Oh round out the voice cast.

Speaking earlier in the year about “Over the Moon,” Oh, who voices the part of Fei Fei’s future stepmother Mrs. Zhong, recalled how producer Gennie Rim approached her for the part. After reading the script, she felt convinced to voice the part.

“Audrey was really calling to me in a very Audrey way. It’s like, ‘What are you doing? Will you just please do the part, please? Just make your schedule work and just make it happen.’ And I’m so grateful for that because knowing Audrey, knowing her writing, knowing her family and knowing what I believe this film meant to her and her family; to be able to be a part of it was a really great experience for me.”

Oscar-winner Glen Keane (“Dear Basketball” and “Beauty and the Beast”) is making his directorial debut  with “Over the Moon.” He worked alongside a trio of songwriters — Christopher Curtis, Helen Park and Marjorie Duffield — to created the original tunes at the heart of animated musical.