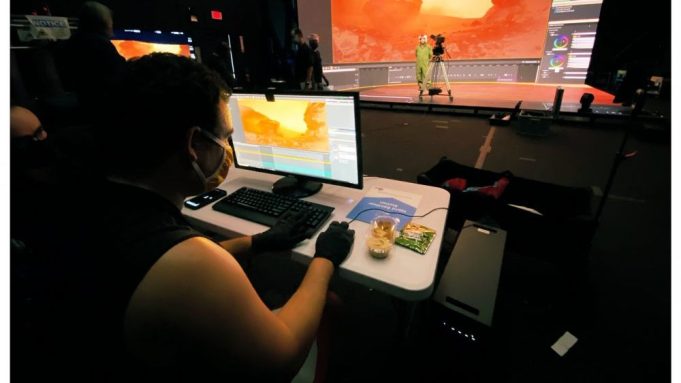 Filmmaker Peter Hyoguchi will be fully embracing virtual production for “Gods of Mars,” a science-fiction epic that he promises will include the type of action and special effects usually seen in big budget blockbusters, but for a fraction of the cost.

How? By embracing virtual production and relying on Unreal Engine technology. “Gods of Mars” will leverage LED walls and LIDAR scans to create virtual environments and all the effects from rocket ships to robots.

The film is set on Mars, circa 2099 where a washed-up astro-fighter pilot leads a ragtag team of mercenaries on a mission to take out a charismatic cult leader who has convinced a mining colony to revolt. The movie features a huge, interplanetary scope, air battles slicing through Mars’ canyons, giant robots, futuristic Martian cities, close combat and a mystery about who are the original Gods of Mars.

Screenwriter Jonathan Schriber says that when he wrote the story it was a small-scale adventure story on Mars with minimal locations and sets to fit a budget, but pivoting to production using Unreal Engine as the central workflow meant, “I was able to expand the story, set pieces and action while keeping the budget low. We see this kind of technology changing the scope of filmmaking and especially film budgeting in ways to create movies better, faster and cheaper.”

Hyoguchi, who previously directed who directed “First, Last and Deposit,” and “Dwelling,” talked with Variety about his plans for the film and how virtual production will play a part in the science-fiction epic.

What does it mean to fully embrace virtual production – what is different about that than what we’ve seen on “The Mandalorian” or the photo-real “The Lion King?”

In the Hollywood landscape, “The Mandalorian” utilized Unreal Engine to produce “Final Pixel” imagery that was directly photographed in-camera and in most instances, did not require any additional work to go directly into the edit.

Final Pixel is what the audience sees. The final shot. So, for instance, “The Lion King” used the Unreal Engine only to plan out their shots but Final Pixel shots were all done redone using traditional VFX software that takes days to render one single frame of Final Pixel images.

“Gods of Mars” is the first Hollywood production to use real-time rendering of game engine animation/images as finished Final Pixel shots. This is done by our cross-medium creative team that merges game programmers with traditional matte painters and miniature makers with Hollywood pedigrees. To push the Unreal Engine to meet the high-quality standards equal to current VFX/animation software.

Why are you at the stage where you can embrace it for “God of Mars?”

Technically, it wasn’t possible before. Very recently, Epic Games’ Unreal Engine has evolved from a video game creation software platform into a photo-real cinematic tool which is both open source and free. We were able to cross the uncanny valley of reality by creating, scanning and importing live-action practical miniatures into the Unreal Engine.

As a director, working with the Unreal Engine/LED volume is extremely close to the experience of directing actors on location or on set where we can all see and interact with the environment. Directing a scene with green screens is tedious and awkward because everything has to be imagined and post-production is expensive, time-consuming and never as good as capturing everything in camera like traditional production. I love the freedom and intuitive nature of virtual production.

What does this mean for the future of production? How did it save time and money?

All told, this new visual reality approach is running only about 30% of the costs of a typical CGI heavy production. That is a huge potential saving on a project that normally could cost north of $200 million.

And, how do virtual productions help with COVID guidelines and safety on set?

“Bubbling up” is made possible because an entire movie can be shot on one LED sound stage. Smaller crews also make a COVID-safe environment. Virtual production can cut cast and crew sizes by half so not only is it safer, it’s faster and more efficient than traditional production models.

After scanning our miniatures, we upload them into the @unrealengine — a vital step in creating the illusion of reality ✨ pic.twitter.com/0X5gNP9Vc1

Only the best Cooke anamorphic lenses for Gods of Mars pic.twitter.com/BymGh6Rn4L