Costume designer Michael Wilkinson is the mastermind behind the looks in “Jingle Jangle: A Christmas Journey,” a period musical that’s now streaming on Netflix. The idea, Wilkinson says of the holiday movie, was to design something viewers hadn’t seen before while paying homage to beloved titles such as “Mary Poppins.”

Directed by David Talbert, the film tells a magical story with a diverse cast including Forest Whitaker and Phylicia Rashad. Wilkinson says he infused the story with bold choices while aiming for a “fusion of 19th-century Victorian-era silhouettes with African culture” both by looking at historic photographs and merging them with bold, colorful patterned textiles from West Africa.

Wilkinson broke down some key looks from “Jingle Jangle: A Christmas Journey.” 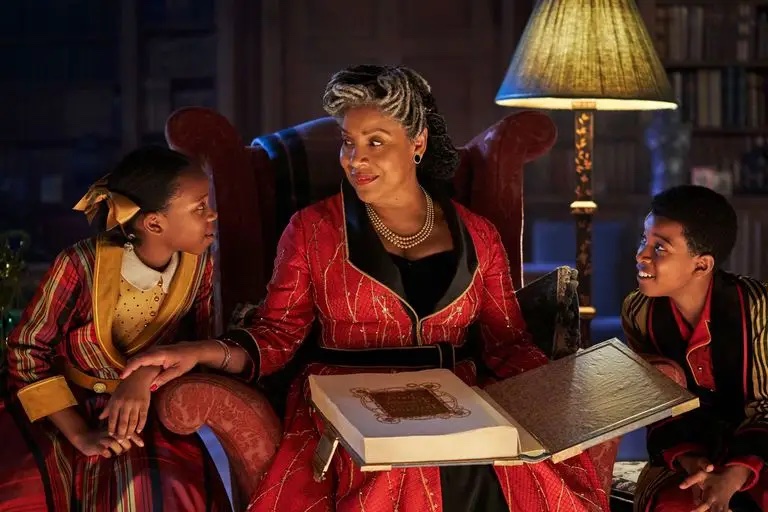 “David was keen for us to create something that audiences hadn’t seen before. So that was kind of my M.O from the start.

Spoiler alert! She ended up being the older Journey, so we had to have a very subliminal link to the younger Journey’s look, but we didn’t want to give too much away. I knew I had to create something quite one-of-a-kind when designing her.

I worked on custom embroidery for her robe, that would have a spiraling motif through it, and a twinkle that would catch the firelight in this beautiful and magical way. We wanted a majestic look and this strong woman idea. I sketched out the embroidery and worked with Cathryn Avison, a wonderful embroiderer.

She and I worked together and once we landed on the design, it took Cathryn and her team of 2 embroiders three weeks to do the whole dress and that full skirt.”

“I fell in love with Journey, played by Madalen Mills, as soon as I read her character on the page. I wanted to honor the iconic female, pioneer characters like Mary Poppins. I wanted her to be recognizable from across the room. The colors would have to be strong. She has this beautiful combination of purples, reds and yellows.

I came up with the idea that her jackets would be hand embroidered. Since the workroom is littered with all of her inventions, I thought she would take those wheels and cogs and sew them all to her jacket. I looked at what pioneering women were wearing in the 1890s. It was a period where women were starting to go to work. They were hopping on bicycles, and they were driving cars. What I wanted to do was capture that through Journey, so she has these culottes that enable her to move around and through the world.

One item I gave her was a red waistcoat that gives this edgy confidence feel to her. I created a bowtie with a jagged silhouette to it. Every choice, whether petticoats or stockings, the idea was to have this curious quirk to it.

With colors, red was important, but I liked the unusual combinations of red with purple and red with yellow. When I did research, you could see the colors of the period had outlandish color combinations of yellows and purples and greens and reds and combinations that would be deemed too crazy by today’s standards.”