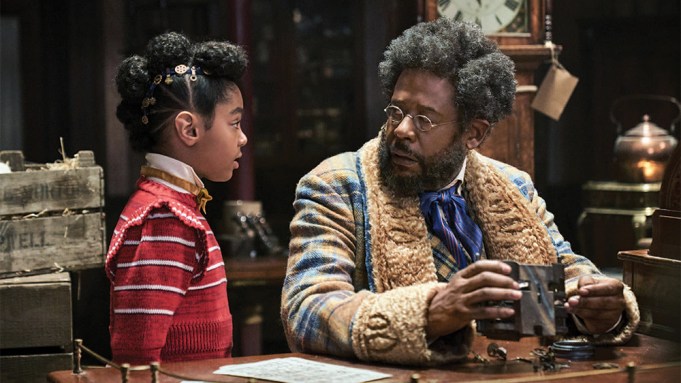 “Jingle Jangle: A Christmas Journey,” from director David E. Talbert and John Legend’s Get Lifted Film Co., is among an increasing number of new Christmas movies that revolve around Black characters. Hair and makeup designer Sharon Martin went to great lengths to reimagine the look of the Black hairstyles in the family film, set against the backdrop of Victorian England and bowing Nov. 13 on Netflix.

Martin aimed to portray the women in the film, particularly Grandma, played by Phylicia Rashad, as “one of the ladies who looked smart, who went to church or went to see their families, as opposed to how we typically see Black women in films from that era where they’re in slave roles and not celebrated.”

The designer, who has worked on films including “Doctor Strange,” started by researching rare photos of Black people in Victorian England and building on the basic shapes and styles she saw.

Rashad’s wig was made from scratch. “We wanted her to look like we had never seen before with this dreadlock look. Traditionally, she’s Mama Huxtable [to everyone] and wholesome, but her hair is straight,” says Martin, referring to Rashad’s character in “The Cosby Show.” “With this, I wanted to do something different.”

Martin started by sampling colors that would work with Rashad’s skin tone. The wig has manicured dreadlocks — all beautifully taken care of, with a salt-and-pepper look.

Alex Rouse Wigs in London was Martin’s go-to wigmaker. “It took two months because [Alex] would mix the colors until they were right, and she’d send me samples. I’d see how it would look, and I’d send her notes back.”

Getting the exact fit for the wig was a challenge, since Rashad was based in New York. “We had to find her head shape. Her hairdresser sent us the measurements, and you hoped it all would come together,” Martin says. When Rashad was finally able to try on the finished wig during the film’s U.K. shoot last year, it fit “like a glove,” the designer notes proudly.

Newcomer Madalen Mills plays Journey, the curious child who visits the workshop of her grandfather, Jeronicus Jangle, played by Forest Whitaker. Once the greatest inventor of gadgets and gizmos, he loses his knack for magic after his most prized invention is stolen.

Martin wanted to do something that was “gorgeous, fun and still fit the period” for Journey. The creation: a “faux-hawk [a fake Mohawk], and her hair was interlaced with ribbon and ornamented with gears.” Martin went to the prop department and found cogs, wheels and screws that she wove into Journey’s hairpiece to incorporate the idea of a preteen girl existing in a magical world of toys.

For Whitaker’s Jeronicus, it took four concept drawings featuring different lengths of beard and hair to nail the design — a slightly wild Frederick Douglass vibe. “We wanted him to look like he wasn’t really taking care of himself anymore. Here was a man who had lost his wife and had not been the same since.”

The bushy wig took six weeks to make, and when it was finished, Martin did more work on it — cutting it and shaping. “I wanted it to look textured but not homeless. I had to find a balance,” she says.

Whether styling Whitaker, Rashad or young Mills, Martin’s goal was to ensure that the Black hair in the film appeared accurate to the period while avoiding the concession of straightening it to blend into white culture. “Black people and women are reclaiming their texture, and they’re proud of it, and it’s not being compromised,” says Martin. “I really wanted to showcase that.”