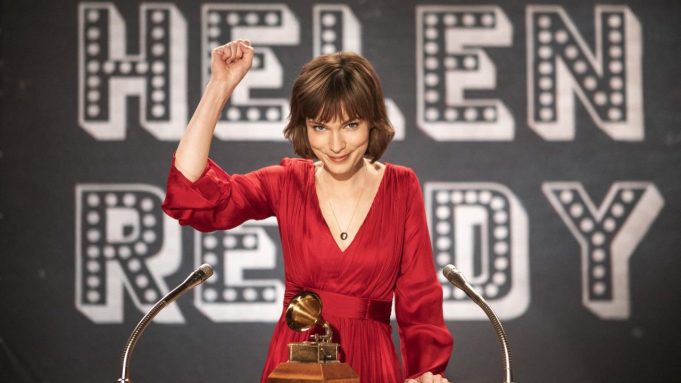 Unjoo Moon’s (“The Zen of Bennett”) latest film, “I Am Woman” charts Helen Reddy’s journey and career as she arrives in New York during the ’60s as a single mother follows her struggle ahead.

Tilda Cobham-Hervey plays the singer, who faces rejection and sexism from record company execs but overcomes the odds to career success. Oscar-winning cinematographer Dion Beebe worked with Moon to establish the film’s tone, following Reddy’s road to success and recreating touchstone moments from her career, including her performance of the feminist anthem, “I Am Woman” at a rally on the Mall in D.C.

Below, Beebe breaks down his lighting choices for the film, which is now available on demand, and how he recreated that D.C moment on a shoestring budget.

Before coming onto this project, what was your relationship with Helen Reddy?

I knew her music, but the first time Unjoo and I met Helen was an Australian awards event in L.A.

I sat down next to Helen, and I’ll admit, I barely knew she was Australian. But, as soon as Unjoo learned I was sitting next to Helen, she made me swap seats. She spent the rest of the night digging into this amazing journey that Helen had been on.

The idea of her story across so many decades felt so relevant. We met her in 2016 around the time of the elections, where we were meant to have our first female president, and that wasn’t to be the case as we soon found out, but this idea of a strong woman was relevant then and it’s relevant now.

What were some conversations you had with Unjoo in framing Helen early in her career and following that progression into the music studio?

If you look at how Tilda holds herself early in the movie, from the clubs or walking in the streets, you’ll see how she holds herself. There was this conscious decision to emphasize the photography to try to show her in this diminished position she’s in. Later in the film, she grows into this confident woman, this person who found her voice.

We looked at techniques such as having the camera slightly above the character to undermine her. Unjoo and Tilda worked on the body language and that progression as she learns to speak her truth. As we progress, we wanted the viewer to feel the strength that she starts to embody as she finds her voice, so we would re-position the camera.

Her journey spans three decades in the movie, what lighting choices did you make depending on the time period?

That was one of my concerns, and Unjoo’s too. The character ages through this. She starts in the ‘60s in New York. We looked at how to get to the final sequence of the movie and believe that this was the same woman we discovered at the beginning. We tested wigs and prosthetics with that. We couldn’t rely on visual effects to achieve those things because this was a low budget film. It wasn’t like the other blockbusters I had worked on.

We would use grain or elements and looked at the palette. New York was cooler with cyan and green in the ‘60s. When she moves to L.A., it’s hopeful, and we used physical sunlight to help light her. The palette also becomes warmer. And by the end, it’s this sepia tone, but nothing was ever overemphasized.

The Washington sequence is such a pivotal moment in the film, it’s so important to everything Helen Reddy was as a performer. How did you recreate that?

The Washington scene is indeed a key moment in the film. It’s this full circle for her where she’s performing the song and rediscovering it and understanding what it means to the audience in front of her.

It was incredible to do that. We shot it in Sydney and on this modest budget. We shot in Centennial Park. We discussed this sequence a lot because we couldn’t afford massive crowds, but we had a day to shoot her performance and the crowd’s reaction.

We discovered a huge storm was going to hit the day we were going to shoot. We discussed the idea of moving it onto a stage – it was possible because we were doing a lot of green screen and stage building. But when you do that, you have to recreate daylight which in turn requires a lot of light. You also have to create an atmosphere because stages are dead space.

In the end, we took our chances and went to the park as planned. We broke the sequence up a bit. We had her on stage, we used a green screen, and we had elements of the crowd and pieced it all together.

But when she comes on stage, the camera is on her face. She’s apprehensive and she’s nervous. The camera moves with her, and she moves past us.

She steps on to the stage and faces the audience and then the camera moves up and reveals this massive crowd. That was a key moment for us in terms of understanding the scale. It’s so easy for sequences like that to lose energy, especially when you’re doing technical stuff, but you see little things like the wind as it was picking up – you see it on the flags, the hair and other things that are there. It infuses this energy into that scene.
.