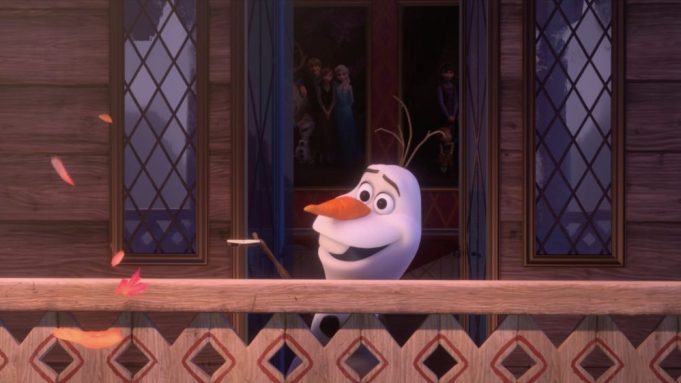 “We can sing, we can share the music and we can make people feel less alone,” Kristen Anderson-Lopez says while quarantining in Connecticut with her family, discussing a new song, “I Am With You,” written for one of the most beloved “Frozen” characters.

The Oscar-winning singer/songwriter was still living in her Brooklyn apartment with double-EGOT-winner husband Bobby Lopez when the coronavirus pandemic halted filming, production and school.

As the parents of two teenage daughters, the Lopezes recall the uncertainty in their lives and the world. Says Anderson-Lopez: “Many of our friends were sick during those first two weeks, and we hold on to music when there’s nothing we can do.”

It was in those first two weeks that the duo was inspired. “It started when Disney released ‘Frozen 2’ early on Disney Plus and that affected us in realizing how our work was helping people through this,” Lopez says.

Naturally they wanted to do more. They learned other folks at Disney were eager to work from home and do something that would help inspire.

As it turns out, there was a series in the works about Disney’s much-loved snowman, Olaf, from the “Frozen” films. Director Jennifer Lee suggested the idea of Olaf writing a letter. “We don’t know who it’s to, but we feel it’s to us,” says Anderson-Lopez of the cue.

Those first two weeks were also about social distancing and quarantining, and who better to deliver a message about being there and caring than Olaf, the character who gives warm(ish) hugs?

Anderson-Lopez wrote the tune in the shower. “I wrote most of it there,” she admits. “ I got out of the shower and wrote the rest of it while dripping wet because it was the only time I had.”

The songwriter reveals that she too was struggling to find time to herself and, once she left the bedroom, she would be cooking, teaching, doing the laundry and being the housekeeper. That writing moment was her time to be creative and write the lyrics to “I Am With You” and just “run with it.”

She wrote the song in an hour, inspired by the people who were dealing with scary things and were alone. “I wanted to do everything I could to make them feel less afraid.”

As Olaf sings about writing a letter to an unknown someone who he misses, he tells his mystery friend that he is “with you with this music / I am with you with this rhyme / I am with you if you need me / Any moment  — any time.” The video is accompanied by a montage of Disney classic clips, including moments from “The Lady and the Tramp,” “Alice in Wonderland” and “Beauty and the Beast.”

Josh Gad, who voices the character, added in his vocals for a heartwarming song that serves as a reminder of what social distancing is —  to protect one another — but also provides a smile during these unprecedented times.

Another person who recently shared their music is rapper Snoop Dogg. He posted a video of himself sitting in his car listening to “Let It Go.” In the video, Snoop says, “I had to come in my car and listen to this s—, man. Let it go. We’ll be outside soon.” The Lopezes got a kick out of the video; she admit, “We’ve been watching it on repeat on all day.”

Is there a Snoop remix in the future? Anderson-Lopez is putting it out there. “From your lips to Snoop Dogg’s ears. I need to reach out to him and thank him for that video.” Let the campaign for a Snoop Dogg “Let it Go” remix commence.