‘Broken Hearts Gallery’: Breaking Down the Crafts of the Romcom 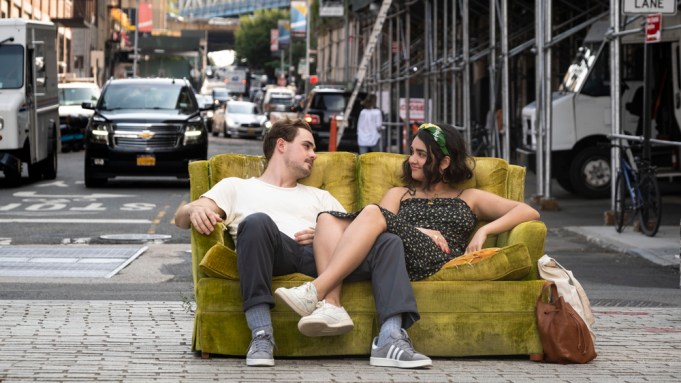 Geraldine Viswanathan stars as Lucy, a 20-something art gallery assistant. She’s also an emotional hoarder, keeping mementos from her past relationships. When she’s dumped by her latest boyfriend, Lucy is inspired to create the Broken Hearts Gallery.

The story, Krinsky says, “was certainly something grounded in reality.” The script began life over 10 years ago when she had been living in L.A., her then-boyfriend had broken up with her and she had just been let go from her job. Over the years, the story evolved, but the essence stayed the same. It was about the feminine gaze — “Lucy is asking the world to love her because of her foibles.”

Below, the crew break down how they built Lucy’s world – her New York from her memory-filled bedroom to her gallery for broken hearts.

A mix of things kind of went into creating the gallery. Natalie and I spent one night in particular coming up with ideas for some of the installation. She wanted it to be site-specific and interactive.

One installation was called, “Leave Your Baggage” — it was a gold hotel luggage cart with a sealed box on it where people could write notes to their exes, whether it was a goodbye or just notes.

There was a big cable down the center of the room with broken plates that looked like people had smashed during fights.

We also had these antique white telephones that people could go to and pick up any of the phones and heard recordings of people telling their stories.

The building where we set the Chloe Hotel/Gallery was a century-old gymnasium and we built this concept around that. The Chloe concept involved turn of the century climbing bars and weights on the upper mezzanine and we blended that all together, keeping in a punching bag that people could use to take their aggression on their exes out on.

During the confessional moments when people are telling their stories, the backdrop is simply an old dirty old painting drop cloth that she grabbed from the construction maps and put up behind them to make everything consistent.

The main goal of that space was to reflect Nick (Utkarsh Ambudkar) and Lucy’s character, and we couldn’t have had that happen anywhere else.

With Lucy’s bedroom, she’s piled in that house with these two roommates, and one girl doesn’t have a bedroom door, she has a curtain differentiating her space from the living room.

Since she’s a curator, so she has an eye on things. Her room is filled with artfully curated junk. She has all these trinkets that she had hung on to from moments in her life and as we find out, how they relate to her relationship with her mom and her sense of memory.

They serve as reminders for different things that she’s gone through. But she goes overboard with it, and as you see, she keeps things like airplane sick bags and wrappers from hamburgers. We tried to layer the things that were in there, and her bedroom is almost like an art gallery in itself.

The toughest nut to crack in almost every film I’ve edited is the first 10-20 minutes. This was a good place for Natalie and me to talk about the film’s initial framing of diversity and the feminist narrative.

The first act was 15 minutes long at one point, and then we got it down to about half that length. There, we established Lucy’s backstory and catalyzing conflicts, including her relationship with an exploitative boss/boyfriend.

By editing on location while the film was still shooting, I was able to build a relationship of trust with Natalie from the get-go. We both instinctively felt we had to distill the opening scenes down to their integral beats.

Some of the story beats were affected by how the actors approached their performances. While all of them had great lines, they were also terrific improvisers, which sometimes caused scenes to pivot to unexpected but fun places.

For Natalie and me, the soundtrack of Lucy’s life was really important. We had conversations about what Lucy’s playlist would be. Geraldine had created some awesome playlists, which we added to ours in the cutting room.

Melany (Mitchell, music supervisor) was able to clear some amazing drops. She knew this Billie Elish song, “Everything I Wanted.” We were five weeks into the director’s cut. We knew we wanted it, and it was days before the Grammy’s where Elish would earn Best New Artist. Melany was able to secure the track before we might be unable to afford it.

There’s a karaoke scene tied to the moment when the audience really starts to feel that Lucy and Nick ought to be together. All the characters are rooting for them. I get emotional every time I see that sequence, and I’ve watched the film about 100 times.

I would send her songs that I thought felt like the movie and we’d find places that they worked and represented what we wanted the movie to feel like. Since the movie was set in New York, I started by looking for New York indie artists that had a sound that reflected the movie. But as we went along, we expanded because you can’t limit music to a particular area.

For the opening, we went through a few variations with song to picture, but when we found “I Remember,” we found It being lyrically ideal. It talks about love and memory and had a broken heart gallery feel. It felt hopeful, which is what the movie is.

With the ending, the footage was shot without music. We had to find a song that lined up tempo-wise. And we were looking for songs, when I was in New York, I went to Ingrid Michaelson’s holiday hop and during that she played “Young and in Love” and the crowd started dancing to it. And that just ended up being the perfect bookend song to the film.