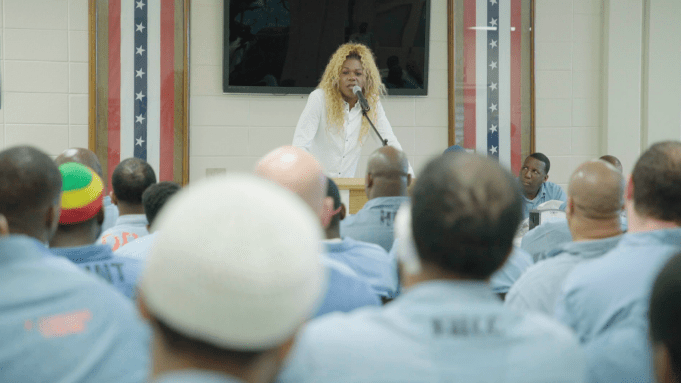 Singer Big Freedia uses her platform to raise awareness on gun violence in New Orleans. In her new doc, premiering at AFI Docs, she shares her personal and heartbreaking story of losing her brother, Adam Ross, to gun violence. Directed by Chris McKim, the documentary follows Freedia as she goes into schools and prisons, diving into the states’ problems with gun violence while sharing her own personal experiences.

What is it like having the documentary come out at this time?

It’s a perfect time. With all this happening, with all this unbalance going on in the world, I think it’s something that needs to be seen and to be heard. God does everything for a reason, and for whatever reason, it just so happened to land around this time.

What were the conversations you had with McKim and producers Randy Barbato and Fenton Bailey as to the approach to the doc since it dives into this deeply personal moment and the bigger picture of gun violence?

When they first asked me if I wanted to do something more serious than what I would normally do on my reality show, I said, ‘Sure.’ I realized it was time to touch on another part of my life that hasn’t been highlighted, like being shot and losing my brother to gun violence.

I wanted to do something different and something that can not only open doors for the youth, but reach out to the community as a whole and try to see what I can do about gun violence here in New Orleans. It’s gotten worse. It’s happening so much more now. When we had those conversations and they asked if I wanted to do something more serious and personal, we looked at my life and balanced it with the story of gun violence and how that needs to be a conversation in the world.

What’s heartbreaking is hearing the stories from the kids who are the next generation talk about guns like that.

It was very disturbing. It was heartbreaking to see that coming from kids who are supposed to be enjoying their teenage lives. It was disturbing to know that they don’t feel safe in their neighborhoods and even at school.

I can’t imagine what they are going through. We didn’t have to have gun drills so much. It was just very disturbing. It’s a conversation that needs to keep happening. How can we let our kids be kids again? How can we make them feel safe in their school systems? And how can they feel safe in their homes? Some of the stories had me mind-boggled. I went back to see what I could do to help some of the kids.

When people watch this and want to help, what can they do?

It starts at home; the way that we do things around the kids. They learn from what they see and what they grow up around. That’s how most people learn how to fight. It needs to start at home.

It also starts with the government, where we need to do more things for the community to allow these kids to be kids and give them a haven where they can feel safe. It takes a village to raise a child.

In terms of all that is going on today with protests and statements from corporations, what would you say are people’s blind spots?