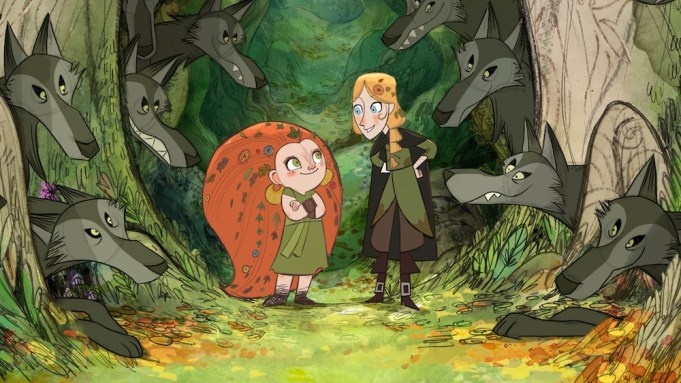 Apple TV Plus has released the full trailer for its first animated feature, “Wolfwalkers.” “Song of the Sea” director Tomm Moore and Ross Stewart are behind the animation.

The hand-drawn film “Wolfwalkers” is set in mid-17th-century Ireland during a time of superstition and magic amidst a world of Irish folklore. Robyn Goodfellowe, voiced by Honor Kneafsey, follows her father to wipe out the last of the wolf pack. While there, she befriends a free-spirited girl, Mebh (Eva Whittaker), a member of a mysterious tribe rumored to have the ability to transform into wolves by night.

As they search for Mebh’s missing mother, Robyn uncovers a secret that draws her further into the enchanted world of the wolfwalkers and risks turning into the very thing her father is tasked to destroy.

Filled with rich illustrations, the trailer shows the blossoming friendship between the two characters and their mythical world. We get a glance at the wolfwalkers, who are instantly recognizable by their blazing round eyes and fiery red hair. These bewitching characters are neither human nor beast, but some combination of the two. They speak to wolves as if by telekinesis, protecting people from possible attack — but what they’re really doing is defending the animals, who are directly endangered by the modernizing world around them.

Speaking with Variety after the film premiered, Moore said the design of the wolfwalkers were inspired by a look that was, “Art Nouveau, really organic.” Stewart added, “We were also looking at Pictish tattoos and Pictish markings to show that the wolfwalkers had been around for a long, long, long time.”

This will be Apple TV Plus’ first foray into contention for animated feature, but not for Cartoon Saloon, the Irish animation studio that produced the film. The studio worked on Nora Twomey’s 2017 “The Breadwinner,” which went on to earn a Best Animated Feature nomination.

“Wolfwalkers” will be released in theaters nationwide on November 13 by GKIDS and premiere globally on December 11 on Apple TV Plus.