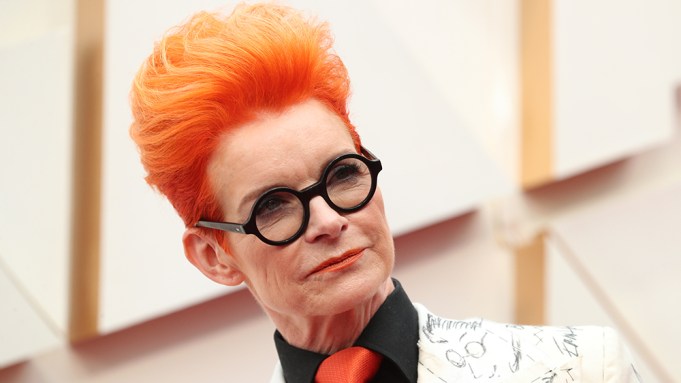 Before film’s biggest night of the year, the stars hit the red carpet for fashion’s biggest annual event. While stars wore Chanel, Dior and Elie Saab to the Oscars, there was one outfit that stood out in particular; Sandy Powell’s cream suit.

Powell was nominated alongside Christopher Peterson for their costume design work on “The Irishman.” She debuted the suit on Jan. 31 on her Instagram page with a photo of Elle Fanning signing the fabric. In the post, Powell said she intended to have her “fellow luminaries” sign the suit. Over the course of the next few weeks, Powell shared photos of Al Pacino, Robert De Niro, Scarlett Johansson and Bong Joon Ho autographing the ensemble.

At the 92nd Academy Awards, Powell added Leonardo DiCaprio, Oscar winner Brad Pitt and Janelle Monae’s names in her quest to get as many stars as possible.

Powell plans to auction the suit for charity for The Art Fund Initiative, a campaign in honor of Derek Jarman. Jarman served as a mentor to Powell when she was first starting in the industry. She would also work as a costume designer on his 1986 film “Caravaggio.” Speaking to Variety last year, Powell said, “I started out with Derek Jarman. There was hardly any money, but everybody mucked in and did everything. It really was fantastic — what I thought filmmaking was.”

Prospect Cottage was Jarman’s home in Dungeness. After his death in 1994, the Art Fund worked to conserve the cottage and its gardens, which serve as inspiration for artists who visit and see the items he surrounded himself with to inspire his creativity.

Powell is one of the many artists, including Tilda Swinton, who are helping boost public awareness to raise over $4 million and save Prospect Cottage and protect Jarman’s legacy.