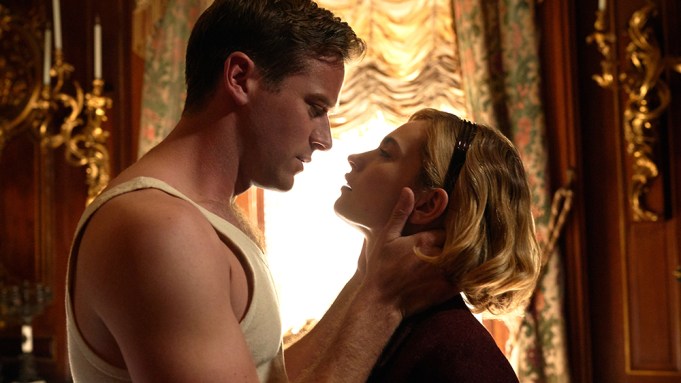 “When we meet Lily James’ character she’s inexperienced; she’s idealistic and she doesn’t have the wealth. The suit she’s wearing the first time we see her reflects that. It’s a standard 1930s look and very matronly.

We’re in the south of France and it’s hot, but the fabrics of that suit are heavy wool, so she’s almost too hot and claustrophobic in it. In contrast, the color palette for the extras in that sequence is pale and sun-drenched and avant-garde. I used lightweight cotton on them, so when we see her that first time, she sticks out like a sore thumb.

I wanted to make sure that the characters were modern in appearance within the world of the ’30s, and I did that by putting Mrs. de Winter in trousers at one point.

At Manderley House, there’s this naiveté to her and an innocence. I put her in blouses with collars, but as she learns about Rebecca de Winter’s disappearance, she starts to become harder and stronger, and there’s a shift of power as she rises — and she has her own gold suit.”

“He’s gone to the south of France to get away from things after being recently widowed, and what I was going for here is a reminder that he’s very enigmatic and wealthy.

I spoke to Ben about putting Armie Hammer in linen when we first meet him. The idea was to put him in this cool summer fabric that was yellow. The first thing Ben said was ‘That’s like an Oscar.’ When you think about it, Maxim is Mrs. de Winter’s prize. She’s looking at the prize that she wanted to capture, and so that observation by Ben was great.

When Mrs. de Winter and Maxim arrive at Manderley House, they’re newly married, and there’s a relief by the staff because she brings some of that south of France look with her with the beret. Maxim runs off to change into this stiff awkward country outfit. It’s a subdued, cold and hard look.

“By the time we get to the end and the trial [he’s been arrested for the suspected murder of his wife], Maxim’s power has diminished and he’s in a dark suit; he’s almost reduced to a silhouette. I wanted to make her character more dominant at this point. She’s now wearing the lighter color, a gold suit. I found the fabric for that while shopping in vintage markets in Paris.

It was a slight representation of what Armie is wearing in the beginning in his ‘Oscar suit,’ and her suit is that, but it’s a power suit — and she’s taken on the role of saving his life.”

I wanted to give her this one look and this one suit. It’s a uniform as such. I didn’t want to give her black because all the other household staff wears black and white. I gave her this beautiful navy suit, and what I wanted to express with that was this domineering look that complemented the severe look of her hair.

For me, she represents the angst of Manderley. While the suit stays the same, her blouses change color and they represent the color of a bruise. It starts where she’s wearing blue, then she’s in a red blouse, and by the end, she’s in yellow. Mrs. Danvers is a bruised woman.”