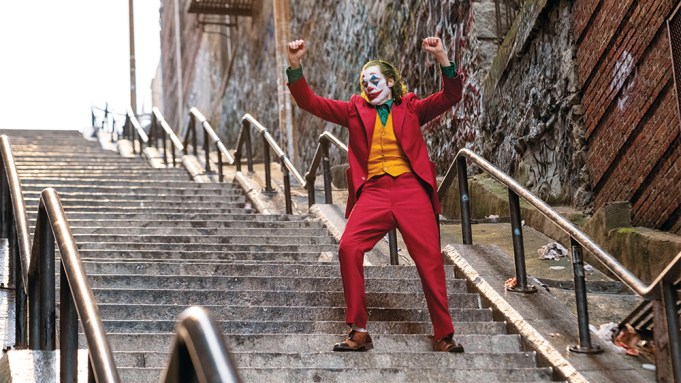 Variety hosted its sixth annual Artisans Awards on Jan. 20 at the Lobero Theatre in Santa Barbara, where eleven artists were honored for their contributions to the best in film this year — including “Once Upon a Time in Hollywood” production designer Barbara Ling, “The Irishman” costume designers Sandy Powell and Christopher Peterson and “Frozen 2” songwriters Robert Lopez and Kristen Anderson-Lopez — each sharing insight into their collaborations and filmmaking processes.

Ling opened about working with Quentin Tarantino for the first time. “His love of directing is like a kid in a candy store,” Ling said referring to the director’s vernacular for detail, adding that being around his infectiousness was “a unique experience.”

Ling detailed transforming the iconic Hollywood Blvd into its 1969 look for the film, explaining how production wasn’t able to shut down the street entirely, but instead would work in sections, filming a few nights at a time. Social media impacted the production’s ability to shoot. “When we started, you couldn’t stop the tourists,” she recalled. “We went from having 300 people [watching filming] to 10,000 people after they started posting it on Twitter and Instagram.”

Sher discussed how the stairs in the “Joker” served “as their own character,” recalling how the crew went scouting in the Bronx, New York and found the stairs. “Those stairs are really hard to climb, it’s reflective of how hard his life is,” he told the audience. “His one most joyous moment is coming down those stairs. It represents his true destiny — which is more down than up.”

Sher’s goal, he said, was to help director Todd Phillips tell the story while working with both the director and star Joaquin Phoenix’s improvisational styles, offering ideas while shooting scene. One example, Sher recounted, was how he caputred the moment Phoenix’s Arthur climbed into the refrigerator. When it came to filming the scene, Phillips had ideas about what Arthur would be doing at night since he wasn’t sleeping. He told Sher to “set your cameras up, he’s going to do something, but we have no idea what it is.”

The first take was just a moment with Phoenix quietly sobbing while washing dishes. “Shortly after, he went in and just started taking stuff out from the fridge,” Sher said. “It was the weirdest thing I’d ever seen on set, but it was amazing.” The version of the scene that made the final cut of the film was, in fact, this second take, Sher revealed.

Speaking of takes, “1917” editor Smith — who had previously worked with Sam Mendes on “Spectre” — admitted it was no easy feat to pull off the one continuous shot look of the film. “It took a huge amount of preparation to make it look seamless,” Smith said, adding that it took months of research into the period, citing Patrick O’Brian’s books as his go-to when trying to get into the mindset of the soldiers. “The scariest thing of all about setting the pace and the rhythm of the film, was once you commit to the takes, the rhythms and the sense of the film had to be exactly right.”

“Frozen 2” songwriters and composers Robert Lopez and Kristen Anderson-Lopez talked about revisiting an older and more mature Elsa and Anna in the sequel. When creating the songs, Anderson-Lopez said collaborating with the film’s directors Jennifer Lee and Christopher Buck were the key. “We want to make it more mature. We want to make it about some things Chris Buck had dealt with personally,” Anderson-Lopez shared, telling the audience that Buck’s son had died during the first “Frozen.” Lopez — a double EGOT winner — added, “We tried to deepen the music. We even used church liturgical references.” Having teenage daughters and teaching them to listen to their gut was also a theme that worked its way into this film’s songs of the film. “All of the songs are about finding their own path and change and growth,” Anderson-Lopez said.

The evening concluded with a presentation to all the panelists with the Variety Artisans Awards presented by David and Sandy Wasco.