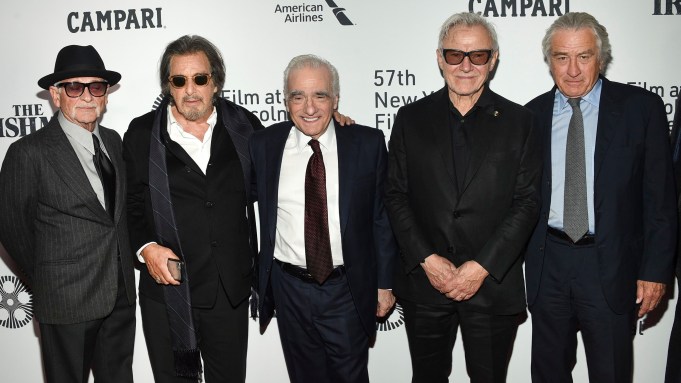 Even with its three-hour run time and a short 28 days in theaters before it’s available on Netflix, Martin Scorsese’s “The Irishman” is likely to be a major contender at the Oscars.

The 57th New York Film Festival opened on Friday night with the world premiere of the epic real-life mob drama. Scorsese and his all-star cast, including Robert De Niro, Al Pacino and Joe Pesci, hit the arrivals black carpet before being introduced on stage ahead of the screening. The last and only other time Scorsese had a narrative feature in his hometown’s signature festival was 46 years ago with “Mean Streets” in 1973.

With “The Irishman’s” 209-minute runtime, many festival-goers jokingly worried about drinking enough coffee to stay awake throughout the screening, which wasn’t set to start until 8 p.m.

And it was close to midnight when the final credits began to roll. Even so, hundreds of guests headed to the festival’s opening night party at Tavern on the Green, where many praised the film for its grand scope. Within just a few hours of the premiere, “The Irishman” scored 100 percent on Rotten Tomatoes.

Pacino appeared to be the big standout for his portrayal of Jimmy Hoffa. While a case could be made that Pacino should be campaigned for lead, he’s likely to be pushed to supporting while Robert De Niro goes for the leading title for his work as the titular Frank Sheeran.

Also in the supporting category could be Pesci for his understated performance as mob boss Russell Bufalino. Additionally, he could score some points with voters for his decision to come out of retirement for the movie.

While early predictions have Brad Pitt picking up his first acting Oscar for his supporting work in Quentin Tarantino’s “Once Upon a Time in Hollywood” (he was part of the best picture winning production team for “12 Years a Slave), his golden statue may not be so sure once Academy voters finally get the chance to see Pacino in “The Irishman.” Pacino has been nominated eight times with only one win in 1993 for “Scent of a Woman.” But if Pesci is also in the category, the “Irishman” vote could be split, leaving Pitt the favorite to win.

Netflix has been lauded for being the only studio willing to finance the $160 million film after Scorsese, De Niro and Pacino tried for a dozen years to get it made. “We finally found people who [would] back it and that was Netflix,” Scorsese said during his introduction of the film, adding, “No one would give us what we needed to make the film, and I don’t think much interest really.”

With that in mind, Netflix has to be concerned that most Academy voters won’t truly experience the impressive size and scale of the film if they’re watching it on their televisions, laptops, tablets or at worst, on their phones. “I think everybody should go see this movie in the theater,” Bobby Cannavale, who plays Felix “Skinny Razor” DiTullio, told Variety on the carpet. “It’s just epic. You’re never going to see these guys together again making a movie and you should go see it in a movie theater because that’s where [Scorsese] intended for you to see it. But also thank god for Netflix because they’re the only ones making movies. I’m grateful that they made the movie.”

Keep in mind, the same concerns were voiced for “Roma,” Netflix’s first big awards film. Naysayers argued it was doomed because of its short theatrical run, not to mention it being a black and white, Spanish-language film. But Alfonso Cuarón’s autobiographical drama about his childhood in Mexico City went on to earn 10 nominations with three wins for director, cinematography and best foreign language film.

Expect the same kind of recognition for “The Irishman.” And even if it doesn’t take home the gold, it’s still going to be a big win for Scorsese and Netflix.