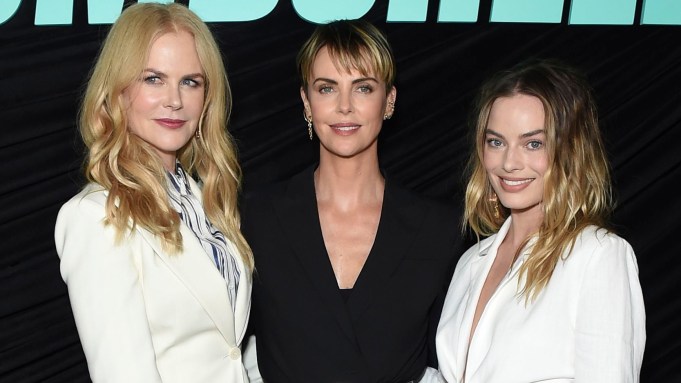 Charlize Theron walked on stage before a screening of “Bombshell” at West Hollywood’s Pacific Design Center on Sunday night and announced to the crowd, “I’m about to s— myself.”

The Oscar winner had good reason to be nervous. The screening of the Jay Roach-directed drama about the fall of Fox News boss Roger Ailes was the first time most members of the press were going to see the movie.

Theron stars as Megyn Kelly, who contemplates going public with allegations that she was sexually harassed by Ailes. Nicole Kidman portrays Gretchen Carlson, the former Fox News host whose sexual harassment lawsuit against Ailes set off that chain of events that eventually led to him being pushed out of Fox by Rupert Murdoch. Rounding out the cast are John Lithgow as Ailes and Margot Robbie, a fictional producer based on several woman who were harassed by Ailes.

It turns out that Theron had nothing to worry about. The film — particularly Theron’s uncanny physical and vocal transformation — was enthusiastically received by the crowd. Up until Sunday, it seemed like Renée Zellweger was going to sail through awards season picking up one honor after another before taking home her second Academy Award in February.

However, Theron could be serious competition for Zellweger. Others in the mix for lead actress include Scarlett Johansson (“Marriage Story”), Cynthia Erivo (“Harriet”), Lupita Nyong’o (“Us”) and Awkwafina (“The Farewell”). Saoirse Ronan has generated buzz for “Little Women,” but Sony has only screened the movie for very few people.

Lithgow could easily pick up a supporting actor nom. Although hard to believe, it’s been 35 years since the the two-time nominee was up for his work in 1983’s “Terms of Endearment.”

“Bombshell” has more than a good shot at earning a best picture nomination, with Roach picking up a directing nom and Charles Randolph up for original screenplay.

There’s no doubt that the film could resonate with voters as Hollywood continues to face issues of sexual harassment and misconduct as well as gender parity. But Lionsgate still has plenty of work to do, especially convincing voters who may not be a fan of the real-life Kelly that a vote for Theron isn’t a show of support for the former news anchor nor her politics.

Voting for someone portraying the beloved icon Judy Garland may feel better than throwing support behind someone playing a polarizing figure like Kelly.

Theron opened up about playing Kelly during a post-screening Q&A with Kidman, Robbie, Roach and Randolph.

“I don’t think I’ve ever chased playing heroes, so putting Megyn Kelly aside, I don’t think I have an interest in it. There’s an earnestness about it that instantly kind of turns me off,” Theron explained. “I’m interested in people who are complicated and flawed and make mistakes because I feel like, in the beginning there were things about her that were off-putting to me.”

Theron also shared that finding the character was about more than the physical transformation, saying discovering Kelly’s emotional beats were different than any role she’d ever played. Theron said she eventually realized she had a lot in common with the journalist.

“I feel like we’re both incredibly strong women who I think can come across hard,” Theron said. “We’re both ambitious and I think all of those things started making her a lot more real for me.”

She added, “We never veered and tried to make [Kelly] sympathetic or to try and persuade people to like her or to think that she was a hero or a good person. … I think all the women played very different roles and did things very differently, which I think is very much how we’re hearing these stories kind of coming out now, right? Women don’t always do the right thing and sometimes we f— each other over. And this idea of what that package looked like — what a victim looks like, and what an abuser looks like — is not black and white, it’s incredibly grey and that’s what I was fascinated by.”

Charlize Theron on playing @megynkelly
“We have a lot in common.”#BombshellMovie pic.twitter.com/pwdohcsotY

During the conservation, Robbie shared her take on the power that “Bombshell’s” story represents.

“I recognized that … you get to a certain place in your career and you suddenly have power and influence and you can do something. And it’s important to check yourself and wonder, ‘How am I using this power that I have and am I doing something with it?’” Robbie shared. “And realize you don’t have to have a huge amount of power to make a difference, that you have a voice and you can do something and women are doing things.”

Kidman shared a similar takeaway from the experience. “I would hope that it would cause someone to feel they can speak up and be heard and be believed, and that there’s power in the numbers and strength in standing together. It’s part of the reason to stand together with these women to do this film. Because the more we stand together, the stronger, more powerful we are, the stronger we are and the more we’re heard and the more we can create change,” she said. “And it also showed how terrifying it is. That’s the nature of it, we understand that, but they did win.”