Why Younger Actors Could Be Crashing the Oscar Nominations 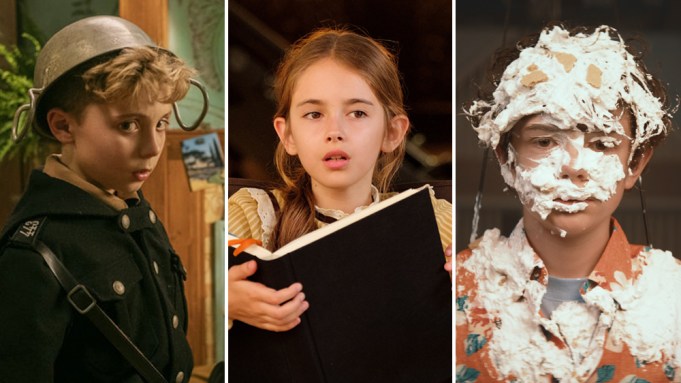 Tatum O’Neal was only 10 years old when she became the youngest actor to win an Oscar in 1974 for her work alongside her father, Ryan O’Neal, in “Paper Moon.”

Besides O’Neal, the only other young Oscar winners have been Anna Paquin, who at age 11 went home with the supporting actress Oscar for “The Piano” in 1994, and Patty Duke, who won a supporting trophy at 16 for her portrayal of Helen Keller in 1962’s “The Miracle Worker.”

Since the Academy Awards began in 1929, only 19 nominees have been under the age of 18. The under-18 set could be well represented at this year’s ceremony, with five potential contenders whose combined ages total just 56 years.

The lead actor category looks to be the most crowded field. Front-runners include Leonardo DiCaprio (“One Upon a Time … in Hollywood”), Joaquin Phoenix (“Joker”), Adam Driver (“Marriage Story”), Jonathan Pryce (“The Two Popes”), Robert Pattinson (“The Lighthouse”), Robert De Niro (“The Irishman”), Michael B. Jordan (“Just Mercy”) and Taron Egerton (“Rocketman”), among others.

Fox Searchlight is expected to put 12-year-old Roman Griffin Davis up for best actor for his work as a member of the Hitler Youth in Taika Waititi’s Nazi farce “Jojo Rabbit.” He’s received kudos from critics and Academy members for being a standout in an ensemble that includes Oscar winner Sam Rockwell, Stephen Merchant, Alfie Allen and Scarlett Johansson as his mom.

In a perfect world, Noah Jupe would also be in the competition. The 14-year-old Brit stars opposite Shia LeBeouf in “Honey Boy,” an emotional and at times very dark biopic the “Transformers” star wrote about his preteen Disney Channel years living with his drug-addict father. Jupe plays the young LaBeouf (known as Otis in the film), and LaBeouf portrays the character based on his dad.

“I remember receiving Noah’s self-taped audition,” “Honey Boy” director Alma Har’el recalls. “He was British, and I was worried that at his young age he might not be able to tap into the nuances of this Jewish American kid of a certain social economical background. By the time I finished watching his audition, I was wiping the tears off my face. It was the first time I cried watching the dialogue and certainly not the last time. I turned around to my producer, Chris Leggett, and heard myself say,  ‘Now this is an actor.’”

As for the supporting actor category, there is a lot of buzz around 11-year-old Archie Yates, who makes his acting debut in “Jojo.” Yates co-stars as a fellow member of the Hitler Youth, and as I’ve noted in previous columns, he steals almost every scene he is in. “He’s a great kid,” says Allen, who plays a Nazi officer in the movie. “Nothing fazes that boy.”

Also in supporting could be Azhy Robertson, 9, as the son caught in the middle of the nasty divorce of his parents (Driver and Johansson) in “Marriage Story.”

“Azhy knew his lines backward and forward. He could take nuanced direction, hit complicated marks and then in the midst of everything … just be,” “Marriage Story” writer-director Noah Baumbach tells me. “This is every actor’s challenge. That Azhy was 8 at the time makes it nearly inconceivable.”

Archie and Azhy probably won’t hear their names called when nominations are announced on Jan. 13, because the field is crowded with the likes of Brad Pitt (“Once Upon a Time … in Hollywood”), Tom Hanks (“A Beautiful Day in the Neighborhood”), Willem Dafoe (“The Lighthouse”), Al Pacino (“The Irishman”), John Lithgow (“Bombshell”), Jamie Foxx (“Just Mercy”) and Anthony Hopkins (“The Two Popes”).

Perhaps 10-year-old Julia Butters has a shot at a supporting actress nomination for her brief but highly memorable appearance as a child actor opposite DiCaprio as a fading Tinseltown star in “Once Upon a Time.” That was not an easy feat, considering all of the acting powerhouses featured in the Quentin Tarantino film.

“One of the first things anybody said after they read my script was ‘Who are you going to get to play the little girl?’ My answer was always ‘We’ll find her,'” Tarantino recalls. “They found that girl for ‘True Grit’; we’ll find Trudi. But frankly I thought it would be a little harder than it turned out being.

“Just as casting was starting, I was at home, flipping channels on my TV, when I landed on an ABC sitcom I’d never heard of called ‘American Housewife,'” he continued. “And as I landed on it, there was a little girl about 8 years old — Trudi’s age — doing a comedy scene and talking in very similar rhythms to the way Trudi talks. The more I watched, the more I thought, ‘Oh, my God. That’s Trudi! It can’t be that easy, can it?’ The answer was yes, it was that easy.”

That young girl was Butters.

“So Julia and her mother came in, and yes, I was right — she was Trudi. We worked with Julia the whole first two weeks of the movie, and she was an utter delight,” Tarantino tells me. “I can honestly say, the saddest moment of the shoot was when we wrapped her — how were we going to get through the day without Julia?”

In 1934, at the 7th Academy Awards, 6-year-old Shirley Temple received the first Juvenile Oscar, an honorary statuette that recognized the work of performers under 18. Hayley Mills received the last one in 1961, the day before her 15th birthday, for her performance in “Pollyanna.”

If ever there was a time to bring back the Juvenile Oscar, it’s this year.